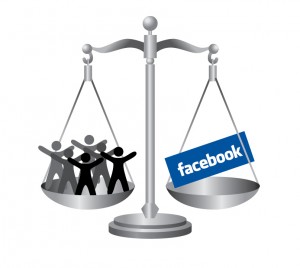 In New York personal injury cases it has become routine for defendants to serve a notice for discovery and inspection of a plaintiff’s facebook page.

Who doesn’t have a Facebook page these days? It’s the most popular way to connect and stay connected. Fortunately, there are numerous settings available so you can control the privacy level of your content and therefore, who you share your information with.  So if you wanted to post a comment to your Facebook “friends” informing them that despite that devastating car accident you were recently in, and the pending million dollar lawsuit against the other driver, you feel great, have gone back to work, and participate in all of your daily activities; no problem right? Your secrets are safe?

In the context of personal injury cases, the New York courts seem to agree that legally, to the extent that a plaintiff’s Facebook postings are relevant, in that it contradicts or conflicts with plaintiff’s alleged restrictions, disabilities, and losses, and other claim, it is discoverable (see, Patterson v. Turner Constr. Co. (88 A.D.3d 617, 931 N.Y.S.2d 311 [1st Dept. 2011]; McCann v. Harleysville Ins. Co. of NY (78 A.D.3d 1524, 910 N.Y.S.2d 614 [4th Dept. 2010]).  In fact, disclosure is not necessarily limited to the “publicly available” portions of one’s facebook account but may also include the portions which were deemed by the user to be “private” or even those postings that had been deleted (see, Patterson v. Turner Constr. Co., supra [the postings on plaintiff’s online Facebook account, if relevant, are not shielded from discovery merely because plaintiff used the service’s privacy settings to restrict access]; Loporcaro v. City of New York, 2012 N.Y. Misc. LEXIS 1726, 2012 NY Slip Op 30977U (N.Y. Sup. Ct. Apr. 9, 2012][allowing access to certain deleted materials]).

After all, “to permit a party claiming very substantial damages for loss of enjoyment of life to hide behind self-set privacy controls on a website, the primary purpose of which is to enable people to share information about how they lead their social lives, risks depriving the opposite party of access to material that may be relevant to ensuring a fair trial” (Romano v. Steelcase Inc., 30 Misc. 3d 426, 907 N.Y.S.2d 650 [Sup. Ct. Suffolk Co. 2010]). What is not clearly defined, nor apparently uniform, is the way the courts treat Facebook disclosure requests.  For instance, in Loporcaro v. City of New York, (supra), the plaintiff alleged in his bill of particulars that he was incapacitated, confined to bed or home during the first two months following the accident, and suffered permanent effects on his daily life.   Granting defendant access to  portions of plaintiff’s Facebook account, including access to certain deleted materials, it was the court’s opinion that since it appeared that plaintiff had voluntarily posted at least some information about himself on Facebook which may contradict the claims made by him in the present action, the moving defendant had sufficiently shown that information contained within plaintiff’s Facebook account may contain information that may well prove relevant and necessary to the defense.

Similarly, in Romano v. Steelcase Inc (supra) defendant filed a CPLR 3101 motion for access to plaintiff’s current and historical social networking pages and accounts claiming that the plaintiff had placed certain information on the sites that it believed were relevant to the extent and nature of her injuries, especially her claims for loss of enjoyment of life.  The court found, inter alia, that in light of the fact that the public portions of the plaintiff’s social networking sites contained material that was contrary to her claims and deposition testimony, there was a reasonable likelihood that the private portions of her sites might contain further evidence such as information with regard to her activities and enjoyment of life, all of which were material and relevant to the defense of her personal injury action. Consequently, pursuant to CPLR 3101, the defendant was entitled to the information.

In seeming contradiction, the court in Caraballo v. City of New York ( 2011 N.Y. Misc. LEXIS 1038, 2011 NY Slip Op 30605U [N.Y. Sup. Ct. Mar. 4, 2011]) denied a similar request by defendant that plaintiff provide it with authorizations to access his “current and historical Facebook, Myspace and Twitter pages and accounts, including all deleted pages and related information.”  In support of its motion, defendant maintained that the records from these social networking sites were “just as relevant as plaintiff’s medical records to the extent that there are photographs, status reports, [and] videos that depict plaintiff engaging in activities that contradict his injury.  Citing McCann v. Harleysville Ins Co of N.Y. (supra), the court characterized defendant’s request as a ‘digital fishing expedition’ and opined that defendant had failed to establish a factual predicate with respect to the relevancy of the information the sites may contain.

The Appellate Division in Patterson v. Turner Constr. Co. (supra), took the high road and reversed and remanded for a more specific identification of plaintiff’s Facebook information that is relevant, in that it contradicts or conflicts with plaintiff’s alleged restrictions, disabilities, and losses, and other claims.

It’s a tough call for the courts to make; culling through the voluminous postings on a plaintiff’s Facebook account to determine what is relevant, what is not.  Is something as mundane as a posting that plaintiff just got back from the supermarket relevant? Maybe if plaintiff alleged he has been confined to bed and home. How can a defendant demonstrate the relevancy when it does not have access to the private portions of the account in the first place?  On the other hand, why should defendants have access to every detail of plaintiff’s life that the plaintiff had no intention of sharing with anyone but her “friends?”

Recently, a District Court in Pennsylvania in the case of Offenback v. L.M. Bowman, Inc., 2011 U.S. Dist. LEXIS 66432 [M.D. Pa. June 22, 2011]), expressed an interesting, but likely impractical, viewpoint on the matter.  In this case, the District Court had referred the action to a Magistrate Judge for the purposes of conducting an in camera review of Plaintiff’s Facebook and MySpace accounts in order to determine whether certain information contained within Plaintiff’s accounts was properly subject to discovery.  After such review, the Court found that some small segment of the public information contained in Plaintiff’s account was properly subject to limited discovery in this case (among other things, that Plaintiff had posted a number of photographs or updates that reflect he continues to ride motorcycles).  The Court took the opportunity, however, to make the following comment:

“In closing, we express some confusion about why the parties required the Court’s assistance in deciding what information within Plaintiff’s Facebook account is responsive to Defendants’ discovery requests and therefore properly disclosure in this lawsuit. It is thus unclear why the Court was called upon to conduct an initial review of Plaintiff’s entire Facebook account to determine whether it contained potentially responsive, non-privileged information that should be produced as part of discovery in this case. Given that the Plaintiff is the party with the greatest familiarity with his own Facebook account, we submit that it would have been appropriate and substantially more efficient for Plaintiff to have conducted this initial review and then, if he deemed it warranted, to object to disclosure of some or all of the potentially responsive information included in his account. The Court recognizes that the scope of discovery into social media sites “requires the application of basic discovery principles in a novel context,” and that the challenge is to “define appropriately broad limits . . . on the discovery ability of social communications” (citation omitted). However, in this case it appears that Defendants backed away from their initial position that they should be entitled to a general release of all information and data from Plaintiff’s social networking sites, and that instead of engaging in a broad fishing expedition, were attempting to discover potentially relevant information such as that described in their May 2, 2011, letter to the Court. If Defendants had, in fact, narrowed their discovery requests in this fashion, we believe it would have been both possible and proper for Plaintiff to have undertaken the initial review of his Facebook account to determine whether it contained potentially relevant and responsive information, and thereafter to solicit the Court’s assistance if a dispute remained as to whether he should be required to produce the information identified.”

If you represent a plaintiff in a New York Personal Injury action it is your obligation to advise your client not to post anything regarding or in any way relating to the case on Facebook or any other social media site. Even the most seemingly innocuous posts may be taken out of context and adversely affect the case.