Numerous bicyclists and pedestrians have been severely injured and several of them have lost their lives in traffic crashes along Mc Guiness Blvd in Greenpoint, Brooklyn. The corridor nicknamed “Hipster Highway” is notorious for passenger vehicles and large trucks speeding. Two years ago a study by Transportation Alternatives showed that two thirds of cars and 62% of large trucks traveled over the 30 mph speed limit with a maximum speed reaching 50 mph for cars and 47 mph for big rigs.

Things should change and residents’ safety should improve by the end of this month as the 1.1 mile stretch of Mc Guiness Blvd between Bayard Street and Freeman Street will become the third arterial slow zone in New York City. New signage will be installed, traffic signals will be coordinated to reduce speeding and the NYPD will increase enforcement on the boulevard.

The creation of 25 arterial slow zones is part of the Zero Vision Action plan to reduce traffic fatalities in the city. 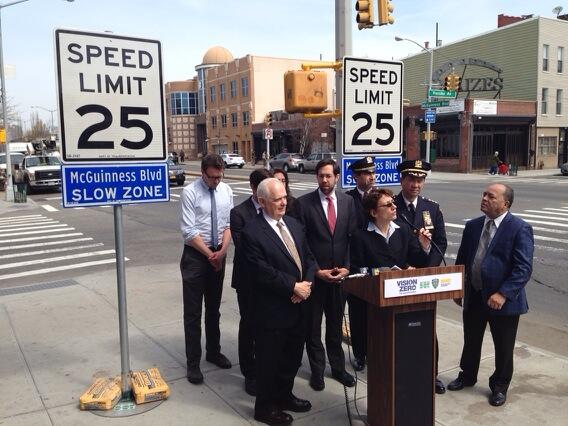