Two men in their 20s riding on a bike were seriously injured after they were hit by a car in Astoria, Queens on Tuesday night around 7:00 am. Then early Wednesday around 5:00 am, a motorcycle collided with a car at the intersection of Union Turnpike and Woodhaven Blvd in Queens. The 31 year old man operating the motorcycle was rushed to the hospital in critical condition. The passenger, a 20 year old woman, as well as the car driver, a 26 year old man also suffered personal injury but were in stable condition. 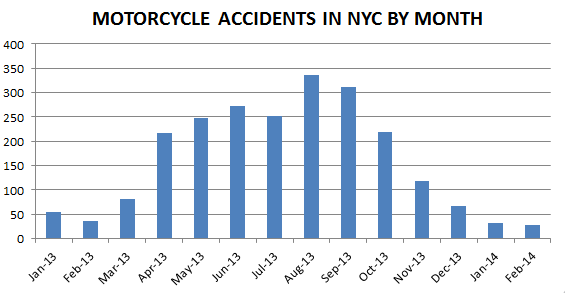 Because motorcycles offer very little protection when a crash occurs, motorcycle operators are 35 times more likely to die on the road than car passengers with head injury being the leading cause of death in motorcycle accidents.

In the other 43 % of motorcycle accidents that did not involve another vehicle, alcohol and speed were often a factor contributing to the accident.