Today we are looking at fatal pedestrian and bicycle accidents in New York and in the US.This is part 3 of of our series on the Walking and Bicycling Alliance 2014 Benchmarking report.

Globally since 1980, the pedestrian fatality rate and the bicyclist fatality rate have been decreasing significantly in the US. In 1980, 8070 pedestrians and 965 cyclists died on the road compared to respectively 4432 and 677 in 2011. However while the absolute numbers dropped, the percentage of pedestrian and cyclist fatalities among all traffic fatalities increase from 12.6% in 1980 to 15.8% in 2011.

Pedestrians and cyclists who are 65 and older have a much higher risk to be involved in a fatal accident. Seniors represent 10% of pedestrians and 6% of cyclists but account for 19% of the pedestrian fatalities and 12% of the cyclists fatalities.

New York City is not as safe for cyclists as it is for pedestrians. Between 2009 and 2011, The city ranked 30 among the 52 US biggest cities with a bicyclist fatality rate of 6.4 per 10,000 commuters. Arlington, TX and Wichita had a rate of 0% which is due to the fact that almost no one commutes by bike in these cities. San Francisco and Portland who have a high number of people commuting by bike have a fatality rate of 0.9 and 1.1 per 10,000. Forth Worth and Detroit had the worst rate with 41.9 and 39.8.

While comparing all cities, statistics show that there are lower bicyclist and pedestrian fatality rates where there are more people biking and walking. Motorists usually drive more carefully around walkers and bikers when they’re used to seeing people walking and biking. 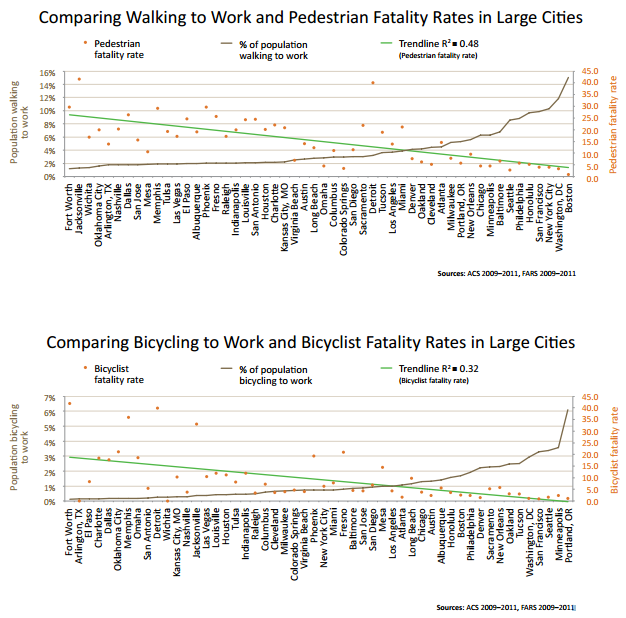