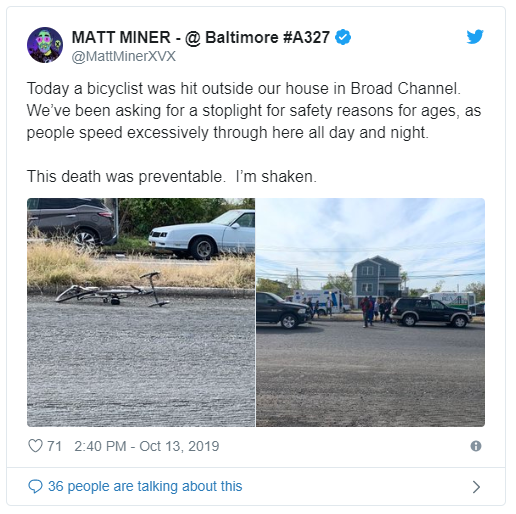 65 year old Bogdan Darmetko died in a bicycle accident in New York City on Sunday. Bogdan was riding his bike on Cross Bay Boulevard in Broad Channel around 2:30 pm when he was hit by a 32 year old man driving a 2008 Ford SUV. According to the police report the cyclist who was riding in the unprotected bike lane made a left into the path of the car and was fatally struck by the front of the vehicle. The driver stayed at the scene of the accident and wasn’t charged. When the EMS arrived they found Bogdan lying on the ground. They rushed him to the hospital but he couldn’t be saved. Bogdan Darmetko is the 25th person to die in a NYC bicycle accident this year. He had been riding his bicycle in the city for the last 10 years.

The  accident occurred at a spot where some road construction was ongoing and the cyclist might have swerved to avoid it.  Speed might have been a factor in his death as well. Cross Bay Boulevard is known for excessive speeding and Broad Channel residents have long been asking the DOT to install stop lights to address this problem. The bike lane on both sides of the road is not protected. Many accident have occurred previously on this Boulevard. NYC Crash Mapper reports that in the area where Cross Bay Boulevard crosses through Broad Channel a total of 273 crashes were reported since the beginning of 2016 until the end of last September.  8 cyclists, 4 pedestrians and 82 motorists were injured  in some of these accidents.

According to Streetblog, one of the reasons why no safe street design has been done in this area is because the NYC DOT and the NY State DOT are having a conflict about who controls the roadway between the Joseph P Adabbo Memorial Bridge and the Cross Bay Veterans Memorial bridge.