Yesterday Bill de Blasio chose the site where Noshat Nahian, an 8 year old boy was struck by an unlicensed truck driver resulting in his death, to announce the first implementation steps of “Vision Zero” in nyc. Not far away from this location, 3 other young pedestrians died after being struck by cars this winter. Many of the families who lost a loved ones in traffic accidents were present at the event during which Bill de Blasio as well as NYC Police Commissioner Bill Bratton and incoming NYC DOT Commissioner Polly Trottenberg presented their agenda to reduce pedestrian deaths in NYC to zero.

Bill de Blasio said “There is an epidemic of traffic fatalities in the city and this can’t go on and has to change now”. He also stated that according to statistics by the Department of Health, being struck by a vehicle is the leading cause of injury related deaths for children younger than 14 in the city and the second cause of injury related deaths for senior New Yorkers.

The Mayor of New York announced yesterday that he had created inter-agency working groups to implement Vision Zero, the goal of which is to eliminate traffic deaths in 10 years. The Police Department, the Department Of Transportation, the Health Department and the Taxi and Limousine Commission will all work together to reach this goal. By February 15th, specific and concrete plans will have to be presented to the Mayor by these working groups. This plans will include: 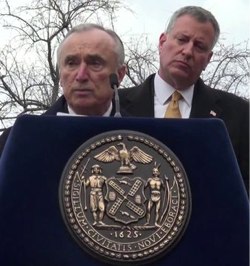 Some measures will take place immediately. For example speed cameras which so far have been issuing warnings will now issue tickets to drivers who exceed the speed limit. The installation of speed cameras is relatively new in New York and have been the subject of a long fight in Albany. De Blasio said that he will continue to fight for the city to have the right to install speed cameras and red light cameras wherever data shows that they will reduce the number of car accidents in the city.

The size of the Highway investigation unit is being increased from 180 to 270 officers who are being recruited and properly trained with a special focus on serious accident investigation.

At precinct level, laser speed measurement devices will replace old technology and traffic safety and pedestrian awareness plans will be incorporated into the mayor’s plan .

Disobying a sign or a traffic signal, improper turns, failing to yield to pedestrians, use of a cellphone or texting while driving and speeding will be strictly reinforced.