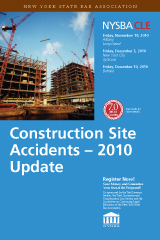 The New York State Bar Association has chosen Howard S. Hershenhorn of Gair,Gair,Conason,Steigman,Mackauf,Bloom and Rubinowitz as The Overall Planning Chair of its annual Construction Site Accidents Program to be held on Nov 19, Dec 3, and Dec 10. Our Partner, Christopher L. Sallay is the Assistant Planning Chair. Also Participating from our Firm are Ben B. Rubinowitz, Chair of The Long Island Program. Robert L. Conason and Anthony H. Gair will also be speaking at the program. In addition to serving as overall Planning Chair, Howard S. Hershenhorn will be demonstrating both plaintiff’s and defendants’s opening statements at The New York City Program as will Ben B. Rubinowitz at The Long Island Program. Robert L. Conason will be giving a demonstration of a Plaintiff’s Closing Argument at The New York City Program. Anthony H. Gair will speak on The Current State of the Labor Law at The Long Island and New York City Programs.

In describing the program Mr Hershenhorn said, “We are honored to be asked to chair this important program on Construction Site Accidents. We have always sought to share our expertise with other attorneys in the field and we have asked some of the very best attorneys throughout New York State to join us.” GGCSMBR has achieved some of the largest awards in the Country for those who have been injured as a result of safety failures at Construction job sites. The firms expertise has brought them National acclaim in the field. Click on the following for information for each location.