There were less auto accidents in New York City in January 2017 (17,126) than in January 2016 (17,798) but more than in 2014 (15,977) and 2015 (16,597).  Over the years we can observe in the graph below that there are usually less crashes in NYC in January and in February.  These are the months where  traffic accidents are at their lowest of the year in the city. It is a seasonal phenomenon. After the  busy “holiday” months of November and December, January and February are usually slower and colder most probably resulting in less traffic in the city. However, despite the drop in last January, the total number of traffic accidents in the city is still on a rising trend. (click on graph to see full size).

4,383 people were injured in NYC traffic accidents last January compared to 3,624 in January 2016 and respectively 3,449, 3,899 and 3,993 in January, 2015, 2014 and 2013. As mentioned before, the seasonal factor explains the drop of  auto accident injuries in January and February. However despite being much lower than in December, it is the first time that the number of people injured in NYC motor vehicle accidents in January is above 4,000.

The number of injuries are on the rise among all road users category.  There were 21% more drivers, 22 % more passengers, 9% more cyclists and 20% more pedestrians injured    in January 2017 than in January 2016.

Pedestrians continue to be the most at risk of dying in traffic accidents. Almost 70% of all New York City road fatalities last January were pedestrian fatalities.

January and February are usually the coldest months in New York City and less people commute with their bikes during that period of the year. Therefore the number of people dying or being injured in bicycle accidents is usually very low in January.  There were 241 bicycle accidents in January 2017 compared to respectively 224, 159, 149 and 248 the same month of 2016, 2015, 2014 and 2013. 1 cyclist was killed in one of these accidents and 179 were injured. Here again the numbers are almost back to pre-Vision Zero. 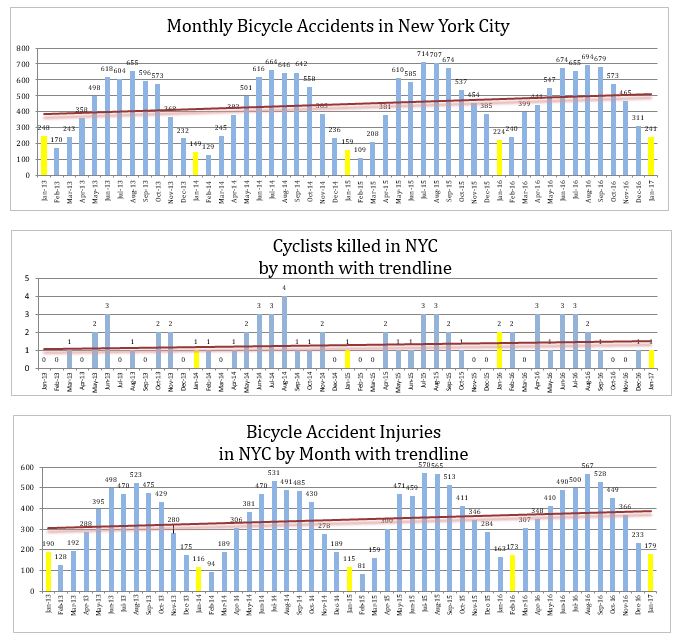 There were 541 bus accidents in New York City in January 2017. This is the lowest number of bus accidents during the month of January since Vision Zero started.