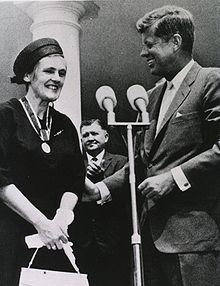 Dr Frances Kelsey, a pharmacologist, doctor and FDA officer prevented the introduction of the drug Thalidomide in the American market, preventing birth defects and saving the lives of thousands of babies.

In the late 1950’s Thalidomide was a very popular drug used in Europe especially in West Germany and many other countries by pregnant mothers for morning sickness. At that time Dr. Frances Kelsey had just started to work at the FDA as a medical officer. She was assigned the review of the new drug application for approval of distribution of thalidomide in the US.
Despite intense pressure from the German manufacturer she refused to authorize the distribution of Thalidomide in the US in 1960.
In 1961 scientific evidence showed that babies from mothers who had been using thalidomide were born with phocomelia, a malformation of the limbs. Throughout the world around 10,000 children were born with phocomelia due to thalidomide and only half of them survived.
This is an example of why those who argue there should be no governmental regulation are so misguided. If it was not for the strong and unwavering opposition to Thalidomide provided by doctor Kelsey, thousands of so called Thalidomide babies would have been born in the United States as they were in the rest of the Western world.
Source: FDA Voice
Picture from Wikipedia, 1962: Frances Kathleen Oldham Kelsey receiving the President’s Award for Distinguished Federal Civilian Service from President John F. Kennedy