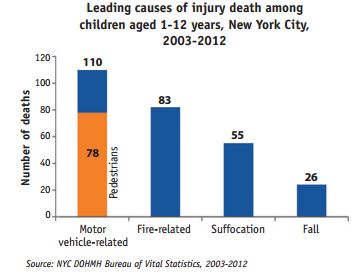 Personal Injury is the leading cause of death among children 1 to 12 years old in New York City and in the U.S. as well. Between 2003 and 2012 438 NYC children died from injuries according to a new report just published by the New York City Department of Health and Mental Hygiene.  These injuries were primarily related to motor vehicle accidents followed by fire related injuries, suffocation and falls. Most of the children who died after being involved in a traffic accidents were pedestrians.

Most injuries leading to death (65%) were unintentional.  Infants between 1 and 2 years old are the most at risk as well as non Hispanic black children of all ages and kids from very poor neighborhoods. Boys have a much higher risk of death from an unintentional injury than girls.

The report also featured a special section which is part of Mayor de Blasio’s Vision Zero Initiatives which contains additional statistics related to the 48 NYC motor vehicle related deaths of children and youths aged 1 to 17  that occurred between 2009 and 2011. According to the statistics, 31 of them were pedestrians, 11 were car passengers, 3 were driving a vehicle and the last 3 were cyclists. Many  children pedestrians who died in a NYC traffic accident were struck by a car less than two blocks away from home most frequently in the afternoon.