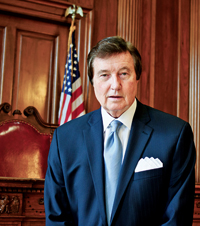 On May 23, 2012, a healthy 41 year old mother of three, Yolanda Medina, was admitted to Montefiore Medical Center for the sole purpose of donating a healthy kidney to her brother, Roberto Medina, who suffers from end-stage renal disease. The surgery went horribly wrong – – Yolanda Medina died during the surgery and her brother never received the kidney. To this day, he remains on dialysis.

The events surrounding the death of Yolanda Medina made national news. The case was one that cried out for resolution. Clearly, the hospital was at fault. And just as clearly, the lives of Yolanda Medina’s three young daughters were turned upside down.

While the tragic events surrounding the death of Yolanda Medina would result in a protracted and lengthy medical malpractice claim, such was not to be the case. Judge Douglas McKeon, the Administrative Judge of Bronx County and a jurist who has presided over thousands of civil claims in one of the busiest courts in the country, had other ideas. It seems that the United States Department of Health and Human Services Agency for Healthcare Research and Quality (AHRQ) had funded a program whose main goals, among others, were to improve the quality of care and patient safety and at the same time compensate patients fairly and expeditiously when they are harmed. To make the program work, however, those involved would have to be educated. This doesn’t just mean educating the lawyers representing the doctors and hospitals but more specifically, the Judges who would be involved in administering the AHRQ program. Obviously, without medically informed, judge-directed negotiations, the program would be doomed from the start.

Not one to back away from a challenge, Judge McKeon took immediate steps to make himself a “medically informed jurist.” McKeon took early morning anatomy classes at Albert Einstein School of Medicine to enhance his knowledge of medicine which could then be applied to the negotiation process in medical malpractice cases.

As the Medina case broke, Judge McKeon knew immediately that this case was exactly the type of incident that would fit the mold of the AHRQ initiative. In short order, Montefiore Hospital and their lawyers as well as the lawyers for the Medina family were called to the Bronx to meet with Judge McKeon.

At the first meeting, Judge McKeon explained the nature of the program to the lawyers and why participation in this initiative would serve the interests of justice for all involved: Years of unnecessary litigation, along with commensurate costs would be disposed with and the parties would be made whole in the eyes of the law. Moreover,
years of worry and uncertainty surrounding the end result would be removed.

Ben Rubinowitz, one of the lawyers for the Medina family, explained, “I have known Judge McKeon for years and have watched him work. He commands the respect of plaintiff’s and defense lawyers and has always been regarded as reasonable, fair, sharp and street smart; however, I must admit I was skeptical of the program when I first heard about it, but was impressed with what I saw.”

After multiple meetings in the Bronx, Judge McKeon was able to bring the parties together. The case was settled. The total time involved: Three months.

“The most amazing thing about this settlement,” said Rubinowitz, “was that Judge McKeon was able to accomplish in three months what is takes most courts three years to do – – settle the case. McKeon knew the medicine, made sure he got to know the family of Yolanda Medina and worked tirelessly with the attorneys to bring about a fair and just resolution of the case.”

This program has the ability to reduce costs for doctors, improve healthcare for patients, reduce the length of litigation thereby reducing litigation costs and bring much needed compensation to the victims of malpractice when it occurs.

While the terms of the settlement remain confidential, the hospital involved in the Medina case issued the following statement:

“Montefiore Medical Center and the Medina family have reached a settlement regarding the tragic passing of Yolanda Medina. Montefiore and the family are grateful for the efforts of Judge McKeon who wasinstrumental in helping all of the parties work together to reach a timely agreement. Our thoughts continue to be with the family during this difficult time.”

So pleased was the Medina family that Roberto Medina, who still awaits a kidney, wrote a letter to Judge McKeon explaining,

“I want to take this opportunity to thank you your Honor. On behalf of my entire family, thank you for helping expedite and fast track this process. We are extremely grateful to you for your thorough attention to our case. We know that you went far out of your way to ensure that justice was done. We recognize that your main priority and focus during this process was to make sure that my nieces and I were taken care of. We know that they will be, thanks to your hard work. We are very fortunate to have a udge like you in the Bronx that has taken the time to deal with an enormous tragedy and to try to make things right.”