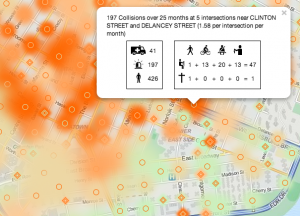 The only map available to the public Today is a thrid party map: http://nyc.crashmapper.com/