A recent study analyzed 147 medical malpractice claims related to Electronic Health Record (EHR) issues and identified that incorrect data entry in the EHR, inconsistency between paper and electronic records as well as system failures were contributing factors in close to 60% of the analyzed claims.

The study was released by CRICO, a patient safety and medical malpractice insurer for the Harvard medical community that includes more than 12,000 physicians, 22 hospitals, and 100,000-plus nurses, technicians, and other employees of Harvard-affiliated organizations. Over 30 years CRICO has built a large comparative database and developed specific tools to analyze medical malpractice claims and identified specific vulnerabilities that need to be addressed by hospitasl and physicians to better protect patients from medical errors.

Recently CRICO analyzed a year’s worth of medical malpractice claims and found that 147 were related to Electronic Health Record problems. Half of these incidents of malpractice resulted in in severe personal injury for the patient. The 147 claims cost a total of $61 million in direct payments and legal expenses.

– Faulty data entry such as recording a patient’s height as 70 cm instead of 70 inches which distorts the body mass index – Unexpected conversion during which a computer automatically converts a 2.5 to 25 without the user noticing can lead to medication error -A user who opens the wrong file and accidentally orders medication for the wrong patient
-A repeated error that persists for years in a patient’s file without being discovered.

Another important area of errors found in the analysis included issues related to the conversion of paper records to electronic records during which some information may be lost or distorted.

Technological glitches such as data routing problems, computer crash or non available help desks are also the culprit behind a significant number of medical malpractice claims related to EHR.

Most cases were related to medication errors and diagnosis with 56% of the claims coming from ambulatory care setting compared to 31% for inpatient and 15% for ER. 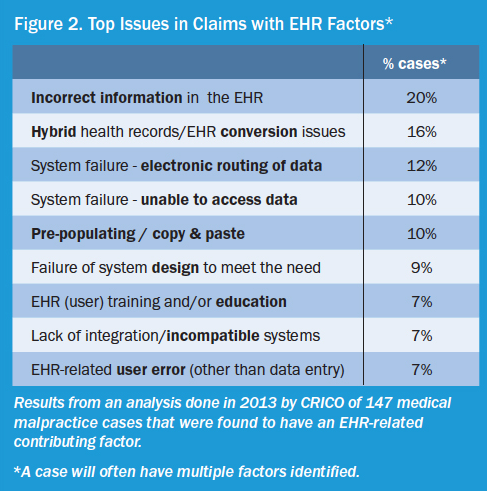