Surgical errors and complications occurring during robotic laparoscopic surgery have to be reported by hospitals to the robot manufacturers. The manufacturers will then report them to the U.S. Food and Drug Administration. Because of the financial interests at stake hospitals and manufacturers tend to keep complaints quiet. An independent and transparent reporting system may provide a more accurate picture of the actual level of safety of robotic surgery.

According to a study led by Martin A. Makary, M.D., M.P.H., an associate professor of surgery at the Johns Hopkins University School of Medicine, more than one million robotic surgeries have been performed in 12 years but only 245 complications including 71 deaths were reported to the FDA. For a new and complex technology these numbers seemed too low to Dr. Makary and his team. To prove their assumption, the researchers compared the incidents reported to the FDA between 2000 and 2012 with legal judgments and adverse events using LexisNexis to scan news media, and PACER to scan court records. They found that 8 cases were not properly reported. Among them some were never filed and other were filed after the media talked about them.

The study also reveals that out of the 71 deaths, 22 were related to gynecologic procedures, 15 happened during urologic surgery and 12 during cardiothoracic surgery. The most common cause of death was excessive bleeding. When patients survived, hysterectomy was the robotic surgical procedure that had the most complications with 43% of all injuries.

Another grey area of the actual reporting system is that there is no standard on how to define if an error is a surgeon related error or device related error. For example if a surgeon accidently cut the aorta of a patient because he didn’t feel its firmness, the hospital may consider it as a surgeon error. Even though they can be prevented, these types of errors which are not always collected by the FDA should also be tracked because they happen more often with robotic surgery than with conventional surgery.

In order to improve robotic surgery safety and to ensure that patients are fully informed of their risks, Dr. Makary and his team recommend the use an independent reporting system that could be similar to the one used by the American College of Surgeons in which independent nurses identify and track adverse events and complications of traditional operations. 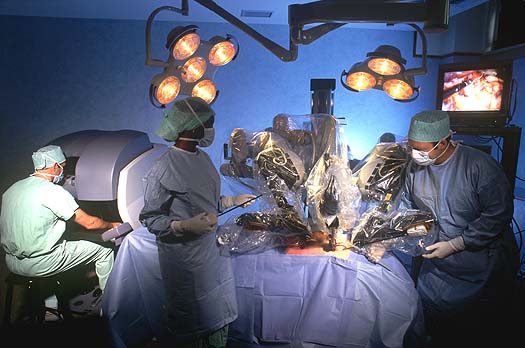