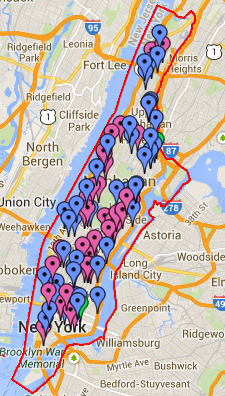 Broadway, First Ave, Second Ave and Seventh Ave are the most dangerous roads for pedestrians in Manhattan. According to The Tri-State Transportation Campaign, out of a total of 89 pedestrians who died after being struck by a vehicle in Manhattan between 2010 and 2012, 28 of them died on one of these large avenues.

In the Bronx, where 72 pedestrians were killed on roads,East Gun Hill Road, Fordham Road, The Grand Concourse and White Plains Road had the highest number of pedestrian deaths between 2010 and 2012.

Flatbush Avenue, Ocean Parkway, Atlantic Avenue, Avenue J, Bedford Avenue and Eastern Parkway were the deadliest roads in Brooklyn where 123 pedestrians lost their lives in a vehicle accident between 2010 and 2012.

115 pedestrians were killed on Queens roads in the three years from 2010 through 2012. The most dangerous roads were Woodhaven Boulevard, Northern Boulevard, Queens Boulevard and Union Turnpike