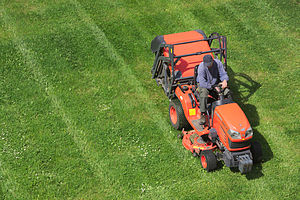 An alarming number of very young children have been seriously injured and some of them even died after someone, often a parent or a family member backed over them while riding a mower.  Most common injuries reported are amputations of hands, fingers, legs feet toes and limbs as well as mangled and ripped internal organs. In a recent article, Fair Warning, found 133 cases in court records since 2004 until now. Among them 8 of the victims died from their injuries. Another study in the American Journal of Emergency Medicine found that there was an average of 65 children injured every year in the US by riding mowers back-overs.

In the 1980ies after an epidemic of injuries related to walk-behind power mowers, The Consumer Product Safety Commission implemented mandatory safety standards for mowers but riding mowers were excluded from them. Some manufacturers propose riding mowers that can mow in reverse. These type of mowers are the most dangerous to young children. In 2003 after a rise of accidents a voluntary standard was adopted by lawn mower manufacturers. The standard requires that the blade immediately stops to spin when the mower riders back up. However the standard also allowed manufacturers to install a button that allows the driver to override the feature. Manufacturers are claiming that they installed the button at the request of their consumers who want more flexibility but safety advocates reply that the button is a good excuse for manufacturers to protect themselves from lawsuits.  However this excuse didn’t always work for the manufacturer Deere & Co. In a recent lawsuit involving a 2 year old girl whose leg was amputated after her dad backed over her while riding a Deere mower, the jury found that the mower was defective and awarded the victim $12.25 million. The jury found that Deere was responsible for 78% of the damages and put the rest of the blame on the father.