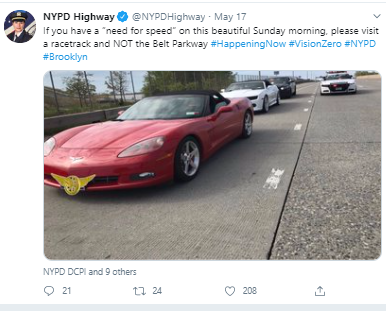 In a recent blog on NYC traffic accidents in April we highlighted the increase in car accident fatalities related to speed and recklessness.  Many of us who stayed in the city during the lock-down could hear the noises of cars speeding throughout the city and witness car drivers speeding on empty streets.  In a recent article, the Gothamist looked at the 311 caller data and found that since March 22nd, when the city went into pause, 420 New Yorkers called to complain about drag racing. That’s 4 times more complaints than during the same period of time a year ago.

Manhattan recorded the most complaints with 123 calls reporting incidents of drag racing, followed by 119 in Queens and 104 in Brooklyn. Staten Island had the less complaints with 20 calls to 311. 47 complaints were reported in the Bronx. There were also 35 complaints of racing on highways not linked to any borough.

Some areas were particularly targeted by drag racers

311 operators received 35 complaints for drag racing on a block segment of Fifth Avenue between 137th Street and 138 Street. This is the area that received the highest amount of complaints. It would be interesting to know how many different callers were responsible for these 35 complaints.  In Inwood, 311 operators responded to 10 complaints of drag racing on Tenth Ave between West 204th Street and West 206th Street and on nearby streets. In Brooklyn, drag racing on Ocean Parkway between Avenue C and Avenue N was reported 10 times to 311 over the last 3 months. In Queens, 9 calls were made to 311 to report cars racing on 20th Avenue between 31st and 33rd Streets.  Several complaints were also related to Avenue S near MacDonald Avenue in Midwood, Franklin Street between India and Java Street in Greenpoint as well as  Ludlow and Stanton Street in the Lower East Side.

Some of the drivers got caught by the NYPD with some getting their car confiscated.

Read  more in The Gothamist