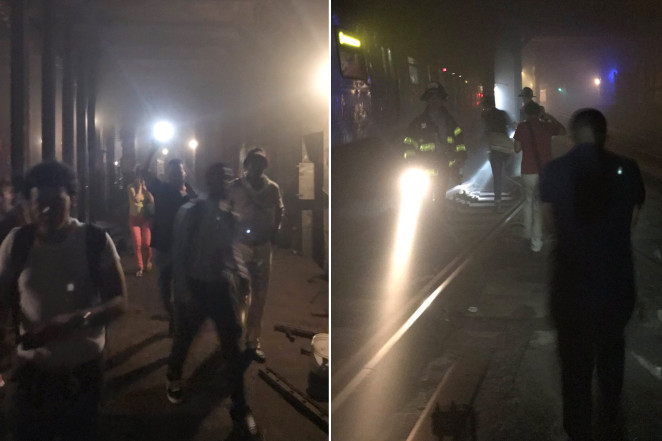 A subway derailed in New York yesterday. According to the FDNY at least 34 people were injured in the accident. 17 of them were transported to the hospital to be treated for minor injuries. A baby and her asthmatic mother as well as other passengers suffered from smoke inhalation. The derailment occurred on the A train between 125th and 135th street shortly before 10:00 am. The train careened off the tracks and scraped the sides of the tunnel wall. In one of the cars a door was ripped open. The track division chairman for the Transport Workers Union, Paul Navarro, said the train “was peeled open like a can opener” According to passengers, the train started to shake violently and the lights started to flicker before the whole train was plunged into darkness and smoke. Passengers started to panic. Some used their shirts as a mask to protect themselves from inhaling the heavy smoke. They remained in darkness and in the smoke for at least 10 minutes until the conductor spoke over the intercom to announce that the train had derailed and that emergency responders were coming through the cars. Some straphangers were evacuated trough the tunnel and others through the train onto the 125th street platform.

According to preliminary investigation by the MTA, the subway derailment was caused by human error. A loose piece of rail was left on the tracks the night before by workers who were doing repair on the A line.

New Yorker’s have been used to getting delayed or stuck in subway cars countless times because of the aging subway  system but they never feared that they were in danger while riding the train. Recently passengers on the F train were stuck in a car without AC and without lights for nearly 3 hours.  However this accident is causing New Yorker’s to wonder how safe it is to ride the subway. Read more in the New York Times