52 pedestrians died in crashes in New York during the first semester of 2022 compared to 58 in 2021. It is an improvement compared to last year considering also that the borders reopened this year and more people were in town than last year. However while better than last year, too many pedestrians are still dying on New York City streets.  Since Vision Zero started pedestrian fatalities during the first six months of the year dropped from 72 in 2013 to 60 in 2014 and 54 in 2015. They reached their lowest in 2017 and 2018 at 49. Fatalities in the first six months of 2020 can not be compared to other years as the lockdown was in place for most of the period under review.

NYC Pedestrian injuries back above 4,000

The return of activities in the city is reflected in the rising number of pedestrian injuries. While not back at the level that they were before the covid19 crisis, they are gradually increasing. 4,005 pedestrians were injured in car accidents in New York City during the fist 6 months of 2022 up from 3,128 in the same period of 2021 and 3,011 in 2020. A year before, during the first 6 months of 2019, 4,939 pedestrian were injured in crashes.

Cyclists fatalities remained at their lowest level during the first semester for the second consecutive year with 5 cyclists deaths. This is positive news as the number of people using bicycles or other mobility devices to commute around the city  increased significantly over the recent years.  The gradual installation of protected bike lanes and other safety measures contributed to make cycling in the city much safer than what it was a few years ago. While much more needs to be done, especially outside of Manhattan, things are going in the right direction to protect cyclists from dangerous accidents.

Bicycle Accident injuries still above 2000 for the first semester

While bicycle accidents fatalities reached their lowest, bike accident injuries remained high during the first six months of the year. After reaching a record high during the first semester of 2021 at 2,303, they went down but remained above 2,000 at 2,027 for the first six months of 2022. This is an average of 10 cyclists injured every day in New York City. It is only since 2021 that bicycle accident injuries in New York City have been above 2,000 for the first 6 months of the year.

While curbing fatalities is obviously the number one priority, the high number of injuries sustained by cyclists should not be ignored. Because cyclists are not protected (except by the helmet when they wear it), injuries sustained in crashes are often serious. Most common bicycle accidents injuries include brain contusion, skull fractures, concussion or other traumatic brain injuries as well as upper extremities fractures (wrists and clavicles are quite commonly fractured in bike accidents) and lower extremities (broken/mangled legs and fractured ankles are common). Face, chest, abdomen and back injuries as well as internal bleeding and pierced organs can also occur during a collision between a vehicle and a cyclists.

Motor vehicle passengers reached a record high for the first 6 months of  2022. 27 passengers were killed in auto accidents in New York City during that time, compared to 16 a year earlier.  This is quite an unusual number as over the years, since Vision zero started, the highest it has ever been was 18 during the first semester of 2015. 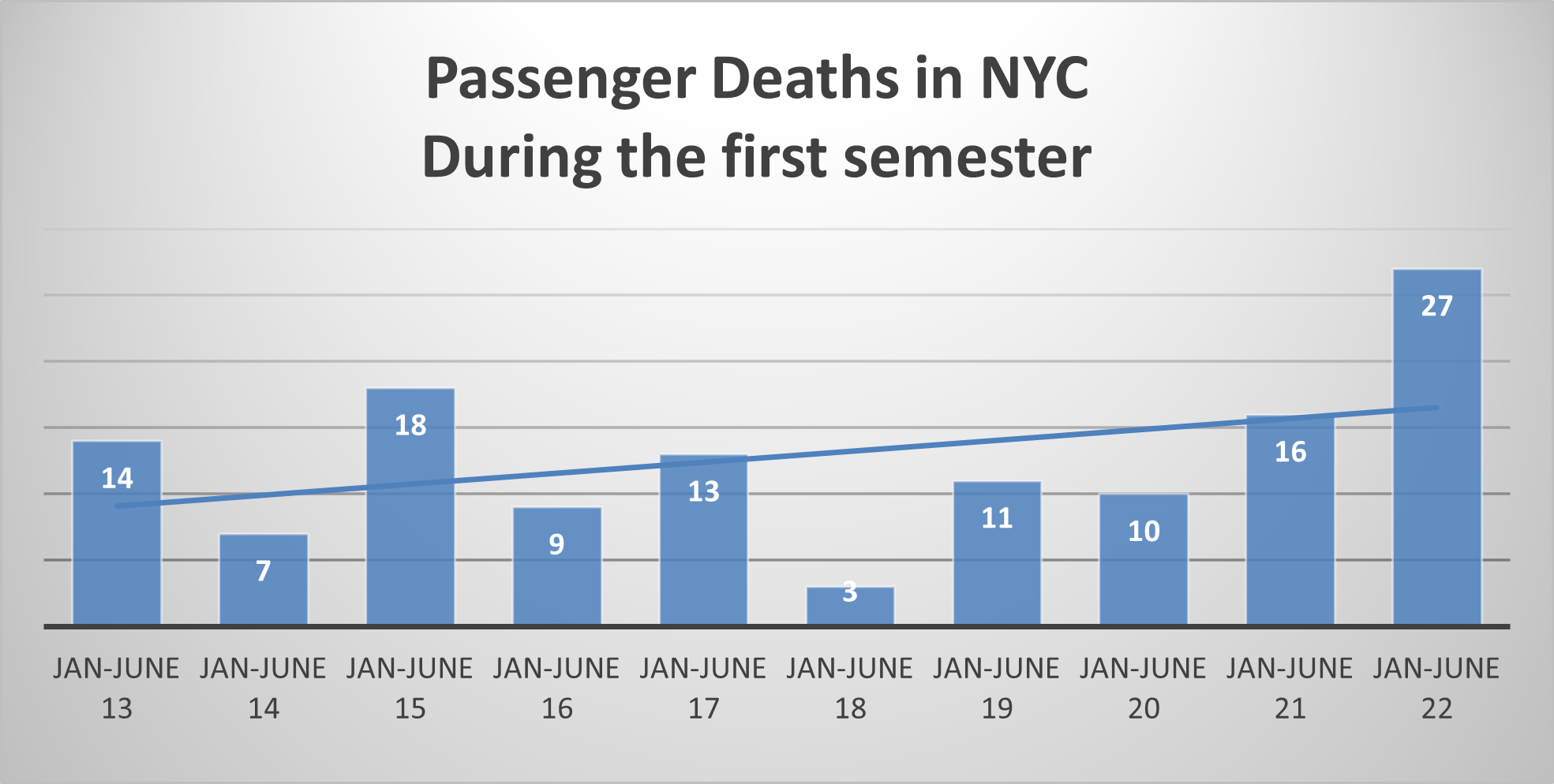 Passengers injuries on the other hand, remain at a level lower than usual. However they have been gradually rising since the drop of 2020. Potential factors behind this are the increased activity in the city since the lockdown and while in the middle of the pandemic people where not comfortable sharing their cars with passengers, this fear seems to have dissipated. 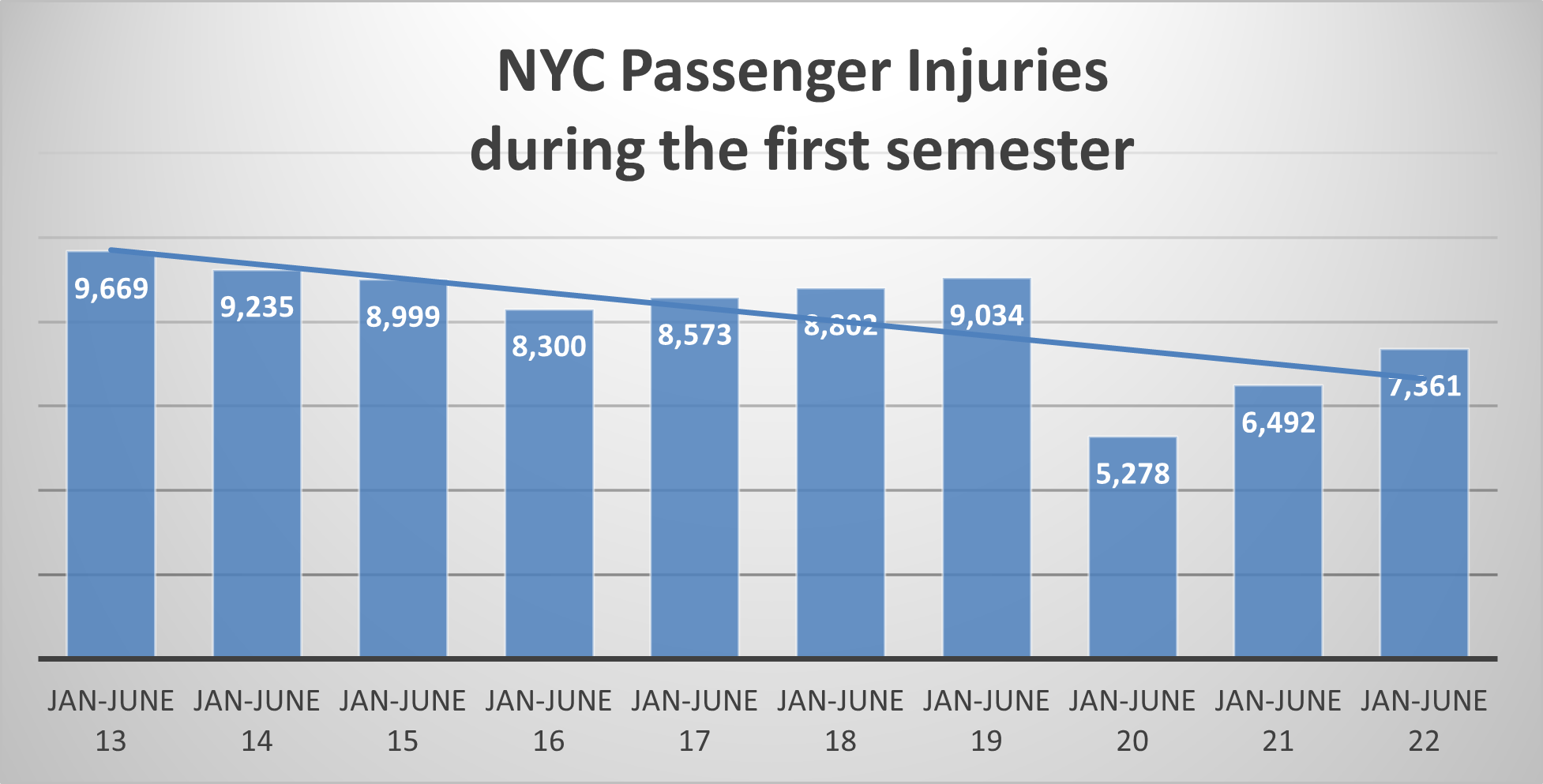 After two years of craziness, driver fatalities decline during the first six months of 2022

29 motorists died in crashes in New York during the first six months of the year compare to respectively 39, 37 and 26 during the same period of 2021, 2020 and 2019. The speeding and recklessness caused by emptier roadways  have been curbed mostly because NYC streets are quite busy again and cars can not speed as much as they used too.  Motor vehicle operator fatalities in the city for the first 6 months of the year are back below 30 and around the numbers where they used to be before the Covid 19 crisis. Speeding and distracted driving remain the mot common factor behind these fatalities. 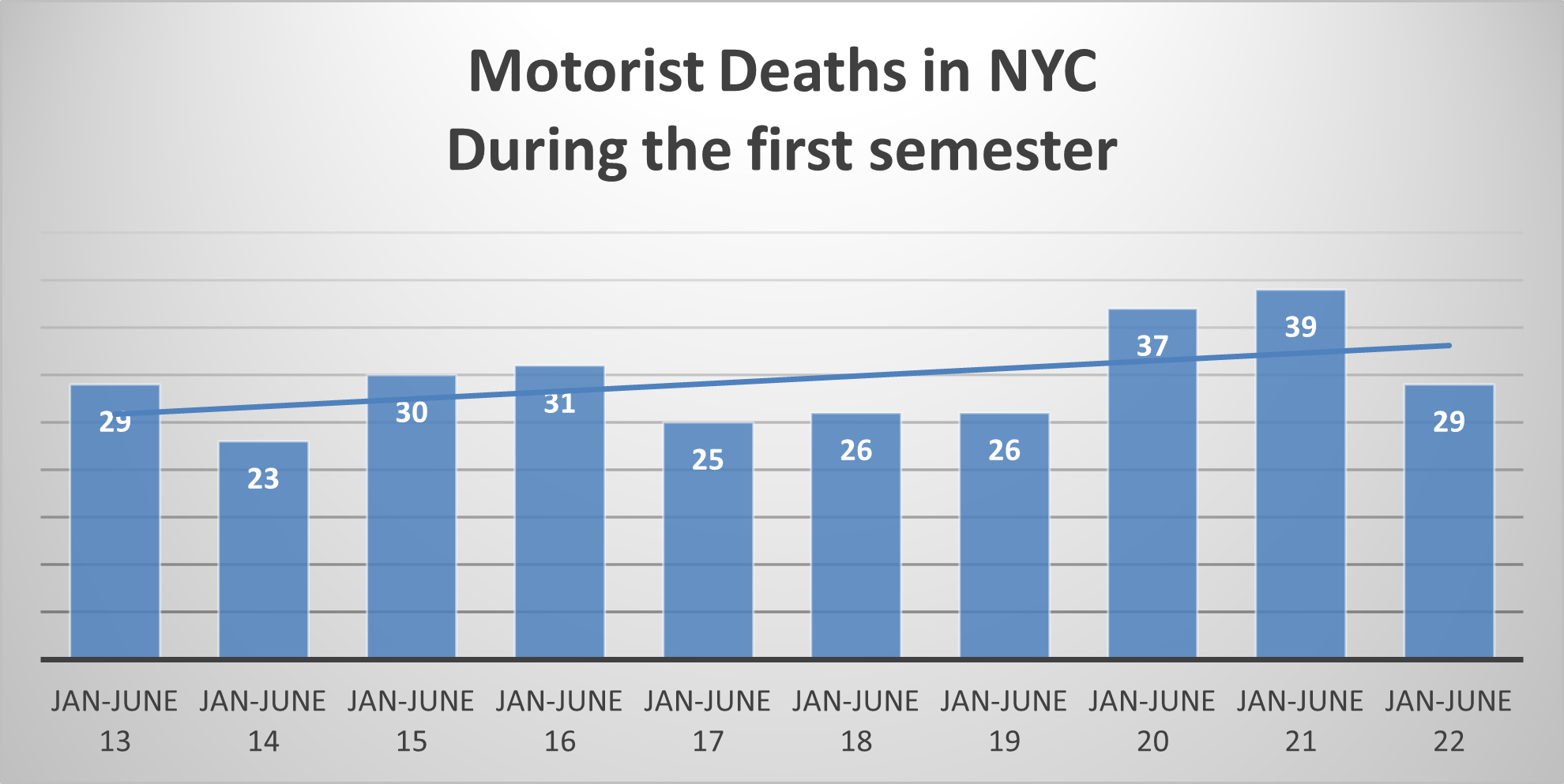 Motorist injuries remain lower than before the Covid19 crisis

10,570 motorists were injured in New York City during the first semester of 2022 compared to 10,975 a year earlier. Motorists injuries, after reaching a record high at 13,201 in 2019, dropped to 8,450 during the first 6 months of 2020 because of the lockdown and went back above 10,000 during the same period of the following year. While not at the level were they used to be, motorists injuries are still quite high. Distracted driving is the number one factor behind this high number of injuries. 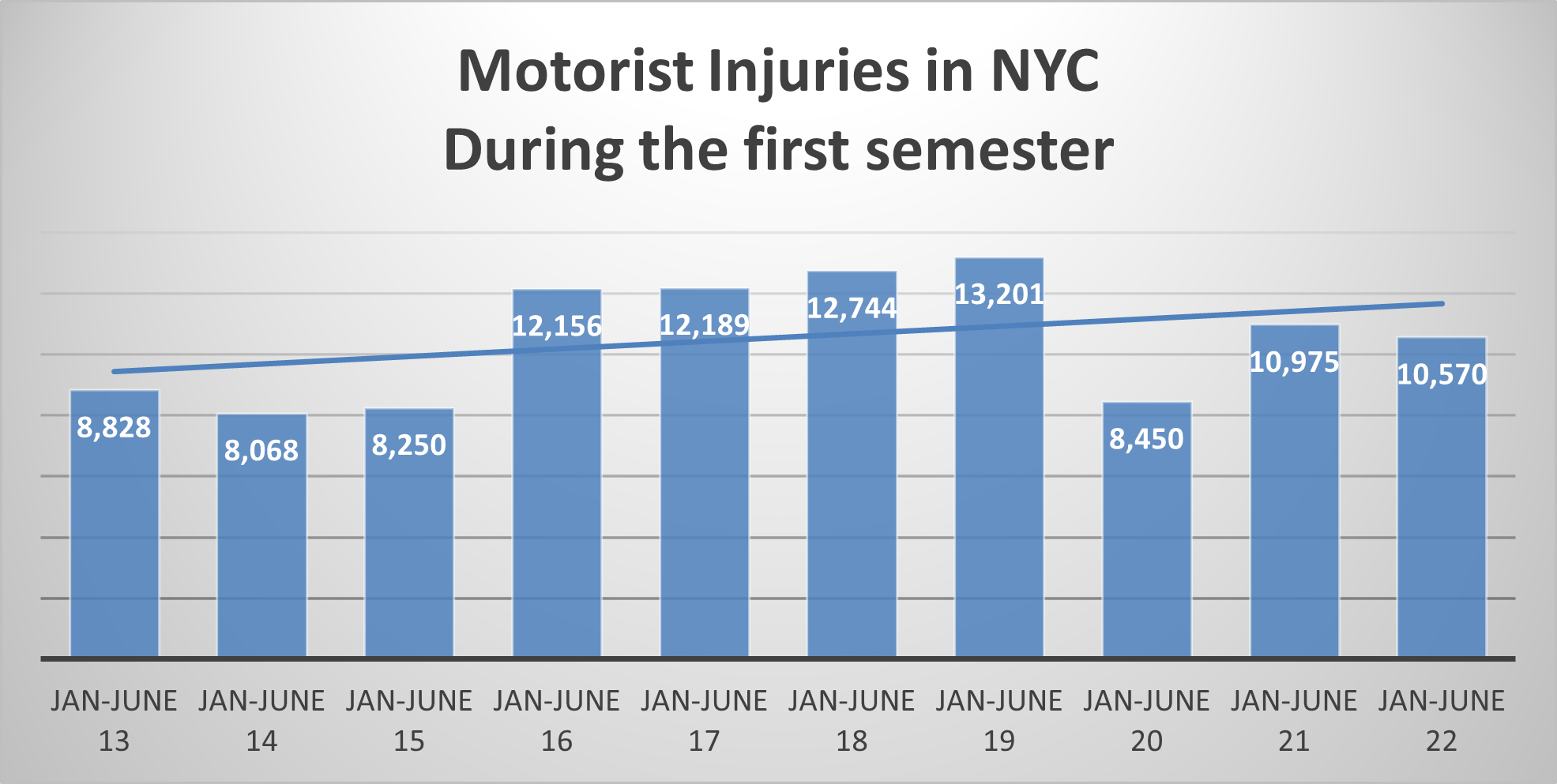