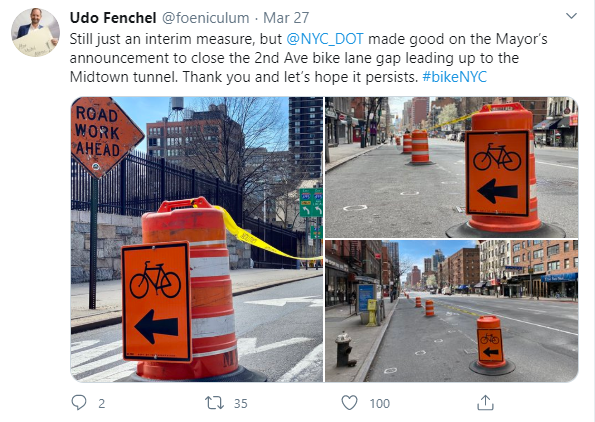 Between March 1st and March 11, CitiBike rides increased by 67% compared to the same period the previous year with  a total of 517,768 trips compared to 310,132.  The bike traffic increased significantly on the four bridges connecting Manhattan with Brooklyn and Queens. The New York Times  reports that on March 9, 21,300 bike crossings were reported in one day compared to 14,032 a year before, a 52% increase. The increase in bike traffic resulted in an increase of bicycle accidents injuries all over the city (see previous blog) with many of them occurring near bridge crossings.

Second Avenue in Midtown Manhattan and Smith Street in Brooklyn

To prevent these accidents, the DOT installed one protected bike lane along Second Avenue near the Queens Midtown Tunnel and one on Smith Street in Brooklyn. New barrels and signage are physically separating cyclists from cars. More  temporary bike lanes should be added soon according to the mayor.
In Queens, Council Member Costa Constantin send a letter to the DOT asking the agency to consider temporary bike lanes in Western Queens on the route that links Northern Astoria to the Queens borough bridge.
Many front line workers who live in Queens and in Brooklyn and do not have a car have switched their mode of transportation from subway to bicycle. These workers  need to be able to access their job in a safe an effective manner.
Read more in Streetblog
Contact Us
Free Consultation 212-943-1090