A 77 year old woman died after being hit by a car in New York. The pedestrian accident occurred at the intersection of Madison Avenue and 36th Street around 8:30 am on Monday morning.  77 year old Carol Dauplaise, a Manhattan jeweler, was crossing Madison Avenue from east to west. She had the green light and was in the crosswalk. As she was crossing, Buddhi Gurund, a limo driver for Tel-A-Car, made a left turn onto Madison Avenue from 36th street and struck her.  Other pedestrians who witnessed the accident rushed to the rescue and lift the car off to try to save the woman. She was transported to the hospital where she later died from her injuries.

Carol Dauplaise was a successful jeweler who had developed her own business into a multi million-dollar business. She started her own company in 1979 with only two other employees: a sales person and a design assistant.  Her company is now employing 50 people in New York City. Her store was located a block away from the accident on 37th Street.

The limo driver told the police that he didn’t see the victim.  According to the Gothamist he was arrested and charged with failure to yield to a pedestrian and failure to exercise due care.

Since August 2014,  when the New York City’s Right-of-Way Law went into effect, drivers who killed or injured a pedestrian because they failed to yield can be charged with a possible misdemeanor crime. If a driver fails to yield to pedestrians but doesn’t injure anybody he can be fine up to $100. If the driver hits a pedestrian causing personal injury or death he can be fined up to $250 and sentenced to up to 30 days in jail.

Justin Kundrat, a writer, posted the bellow picture showing the livery cab that was flipped on the side by good Samaritans who tried to save the woman. 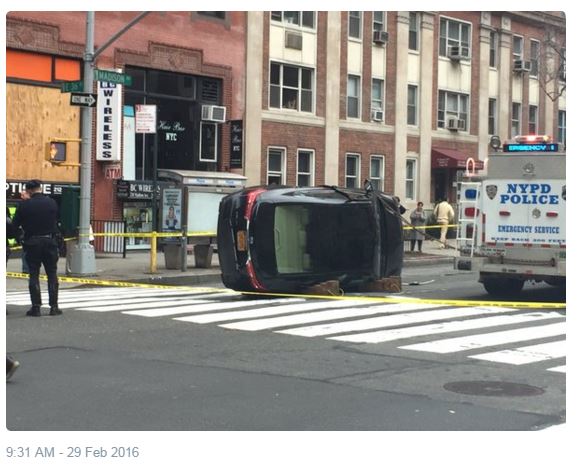