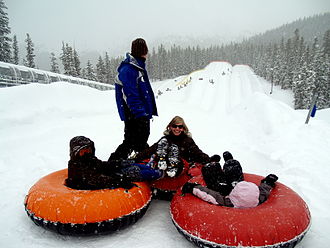 A 16 year old died from her injuries in a sledding accident in Lewiston, New York. The teenager, identified as Renee Hill was riding a sliding tube with her 3 year old nephew in front of her on the tube when she realized that they were about to hit a tree. To prevent her nephew  to hit the tree first she put her foot down to flip the tube. She hit the tree while her nephew was saved.  She was rushed to the hospital in critical condition but she died on the way. Renee was a sophomore at Niagara Wheatfield High School.

The sledding hill in Clyde L. Burmaster Park where the  fatal sledding accident occurred  was closed until further notice and the accident is being investigated.

While it is quite fun, sledding can be dangerous

A study conducted by the Center for Injury Research and Policy at the Nationwide Children’s Hospital found that while decreasing over the years, the rate of sledding injuries remain preoccupying. The study found that 220,488 Americans visited the Emergency Room for sledding injuries from 2008 to the end of 20017. 70% of them were 19 year old and younger. Collision was the cause of the injuries in 63% of cases and among them almost half of them were collisions with an object in the environment. Running into another person accounted for 10% of the collisions and hitting the ground for 16%. Collisions are particularly concerning because they can lead to traumatic brain injury. 82 % of sledding injuries in children are head injuries.  The Center for Injury Research and Policy recommend sledding enthusiasts use a helmet, chose a sled that can be steered and has breaking features rather than a tube, a toboggan, a snow disk or a flat sheet which have much less control.  Making sure the sledding environment has no obstacle and good visibility is also key to prevent accidents.