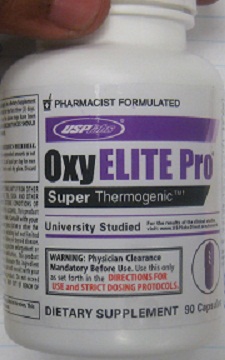 The FDA is asking consumers to stop using the weight loss product  Oxy Elite Pro Super Thermogenic after the agency found  that the product was tainted with fluoxetine, a potential harmful class of drugs called serotonin reuptake inhibitors (SSRIs). When used without doctor supervision, SSRIs can have serious side effects such as sucidal thougts, abnormal bleeding and seizure. SSRIS use can be deadly and result in ventricular arrhythmia or sudden death when mixed with other medications such as aspirin, ibuprofen, or other drugs for depression, anxiety, bipolar disorder, blood clots, chemotherapy, heart conditions, and psychosis. Read more in the FDA press release

It is not the first time that the FDA has discovered hidden ingredients in Oxy Elite Pro.  In october 2013, 1 person died and 11 suffered serious personal injury and had to be hospitalized for liver failure in Hawaii after they used Oxy Elite Pro. The product was subsequently pulled from shelves nationwide. (see previous blog)