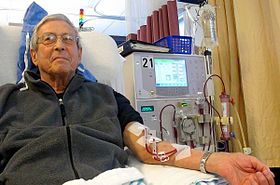 The corporate dialysis industry is resorting to unethical tactics and medical malpractice to prevent patients getting the kidney transplant they need to survive and to keep them on dialysis for years. As a result, many patients who had to go to dialysis centers several times a week during the pandemic, caught Covid19 and died. In a recent investigation, ProPublica describes the multiple obstacles that JaMarcus had to go through to be able to get on the list for a kidney transplant before the covid19 pandemic hit and he ultimately died from contracting the virus at a dialysis center.

In the US, two companies, DaVita and and Fresenius, control 70% of the dialysis market

Patients who require dialysis are mostly patients who suffer form diabetes and who develop end stage kidney failure. While many of these patients could be saved by receiving a kidney transplant, two corporate dialysis companies are spending millions in heavy lobbying so they can continue to get multi billion dollar revenues from mostly Medicare patients who are getting dialysis multiple times a week instead of receiving the transplant they need. According to a recent article in Kaiser Health News, over the last 4 years DaVita and Frenesius spent $212 million just in California to influence voters and politicians and fight a ballot initiative that would have capped their profits.

Until recently, according to federal regulations, dialysis facilities were also the one who were responsible for transplant referrals

This rule has led to all type of abuse. In its investigation, Propublica describes how JaMarcus was assigned by Davita to a social worker who was supposed to educate him and help him get a referral in a few months but a year later still hadn’t done anything. DaVita also mistakenly entered JaMarcus height lower than he actually was in its record so that when his doctor would calculate his BMI he would not qualify for a transplant while he would have qualified if  his correct height had been entered. If JaMarcus had been timely referred for the kidney transplant he needed he would still be alive and taking care of his family.

The Propublica Investigation can be found here

Picture of a patient receiving a dialysis: courtesy of Wikipedia