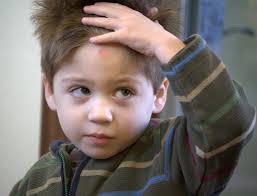 The researchers analyzed the medical data of 329 young patients aged 0 to 4 who visited the Children’s Hospital of Philadelphia healthcare network from October 1, 2013, to September 30, 2015 . They identified  the 3 top common mechanisms of injury.

The first one was fall and represented 64.4 % of all young patients who were diagnosed with a concussion with children younger than 2 year old being at a higher risk of sustaining a concussion in a fall than children from 2 to 4 year old.  Falling from furniture was the most common type of fall leading to traumatic brain injury, followed by tripping and hitting the ground and falling down the stairs.

The second most common mechanism of injury leading to infant concussion is “struck by object“. 20.1% of patients studied were diagnosed with TBI after being struck by objects.

8.1 % of them suffered concussion in a car accident which was the third most common mechanism of injury.

The researchers then identified the most common symptoms reported by parents.

The entire study can be found here