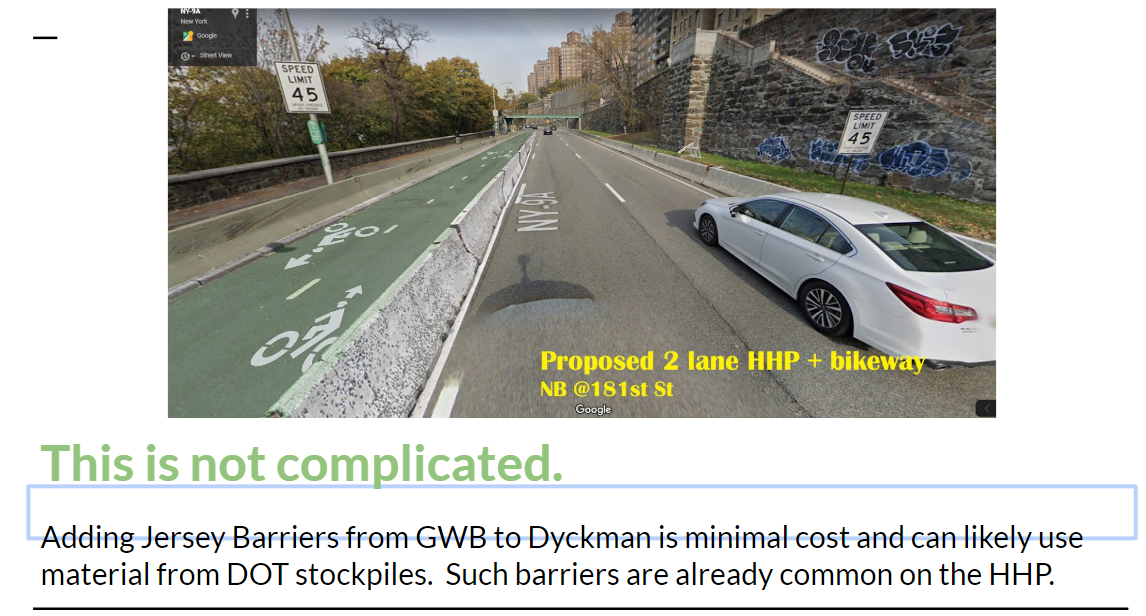 To prevent potential bicycle accidents, the Parks Department has delayed the much needed repair of the upper section of the Hudson Greenway until a safe detour can be figured out. The repairs that were supposed to start last Monday would have closed the Greenway for the next 4 months between West 181st Street and Dyckman Street and cyclists would have been redirected onto Broadway via 181st Street and Dyckman Street. This plan was extremely dangerous for cyclists and after multiple calls from local cyclists and street advocates the Parks Department has now postponed the repairs until a safe detour is found.

One of them, a proposal by Community Board 12  endorsed by former Traffic Commissioner Sam Schwartz, suggests to take one line out of the 3 lines on the Hudson River Parkway north of the George Washington Bridge and to transform it into a temporary bike path separated from the highway with Jersey barriers. This solution would be much safer for cyclists and would not affect the car traffic much as the part of the Hudson River Highway north of the George Washington Bridge is usually extremely fluid.

Additionnally the Community Board 12 suggests that the temporary detour could actually be a pilot to become a permanent fixture that could be expanded North over the Henry Hudson Bridge and connect with the  recently finished Empire State Trail that links the north of New York City to the Canadian Border.

One of the main issues for cyclists using the Empire Trail is that the actual connection to Manhattan is  a complete headache and requires cyclists to dismount and climb stairs while carrying their bikes. The above solution would actually be a perfect fix to link the Empire State Trail to Manhattan. It could be tested during the temporary closure.

Another option would be to create a detour through Ft Tryon Park however  many local cyclists are rejecting it because it would be too steep and arduous.

Illustration source: sharing the road proposal by Community Board 12