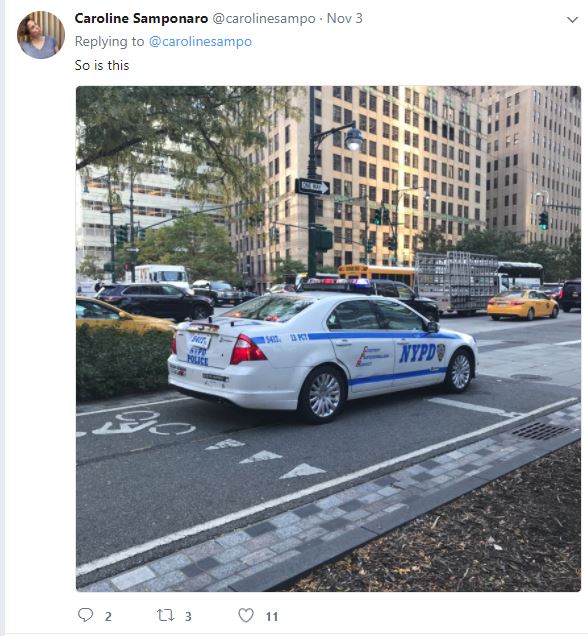 Security measures on the Greenway are creating unnecessary risks of bicycle accidents. In response to last week’s terror attack, the NY state DOT and the NYPD have installed extremely intrusive security barriers on the Hudson River Greenway. 57 crossings have been fortified between 59th Street and Battery Park. On more than half of them, long concrete Jersey barriers have been installed diagonally.  Additionally several police cars were seen parked on the Grenway.  These safety installations are forcing cyclists as well as pedestrians from both direction to use the same narrow path. They create a high risk of head-on collision accidents.

On Friday mayor de Blasio said the barriers need to change so “people can still ride their bike” after many users complained about the bottleneck created by the huge concrete barriers.  The Greenway can get very crowded with cyclists, joggers and pedestrians and the security installed by the State DOT and the NYPD funnel people uncomfortably close together.

On Friday, the State DOT instructed workers to walk down the bike lane and to straighten out the vertically placed Jersey barriers. The DOT also said in a press conference that the barriers were temporary and that they were working on a permanent solution. No timeline was provided. Street safety advocates believe the permanent installation of steel bollards would be an optimal solution for the Hudson River Greenway.

The installation of steel bollards at street and driveway crossings have been requested by street safety advocates for more than 10 years.  It is not the first time that a vehicle drove on the busy bike path. In 2006 Eric Ng was fatally struck by a drunk driver who sped down the Greenway at 60 mph before hitting him. At the time, Transportation Alternatives released a statement asking for various improvements that included the closing of unnecessary driveways, the installation of steel bollards and several other safety measures to prevent cars from driving on the bike path. Unfortunately none of these safety measures were implemented. If they would have, last week’s massacre may have been prevented.