Most construction accident deaths are preventable. Despite New York State’s Scaffold Safety Law that holds building site owners and employers fully liable for worker injuries and deaths caused by falls from an elevation, almost half of the deaths are the results of a fall in New York City and in New York State. The other common causes of deaths in NY and NYC construction sites are electrocution, struck by object and caught in or between equipment or machinery. If it were not for the Scaffold Law, deaths would certainly increase. Thus, efforts to repeal it or modify it should be rejected.

In New York City, District Attorneys recently started to prosecute contractors who needlessly endanger employees’ lives like criminals. Manhattan DA Cyril Vance convicted  Harco Construction and Sky Materials for the death of Carlos Moncayo (see previous blog).  However existing NY criminal law does not go far enough and Harco Construction ended paying only $10,000 for its crime. Construction workers advocates are now asking NY State to pass Carlos’Law, a law that would create real penalties for contractors who recklessly caused a worker to die on the job. 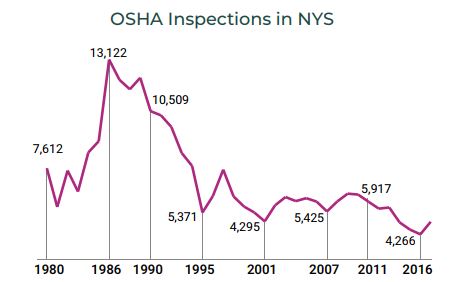 A similar training safety requirement would protect NY State construction workers as well. Unfortunately there is no equivalent to the NYC Department of Buildings at State level and OSHA is in a state of decimation. There was a time in the 80ies when OSHA was running more than 10,000 inspections every year in New York Sate but this time is well past. In 2016, OSHA ran 4266 inspections in New York State. Since 2010, the OSHA budget has remained stagnant and is not expected to increase under the present administration. Additionally , OSHA has significantly reduced the number of press releases on safety and health violators. In Region 2, which New York State is part of, the number of press releases went from 58 in 2016 to 11 in 2017.