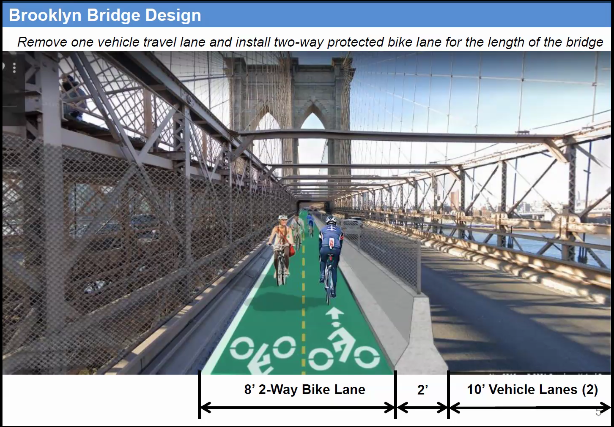 After several bicycle accidents and multiple close calls between pedestrians and cyclists on the overcrowded Brooklyn Bridge, the DOT finally opened a new protected bike lane mid September. As a result, regular commuters who were avoiding the bridge because of the over crowding are making a massive come back. During the month of October,  there was an average of 4,206 rides daily compared to 2,239 during October 2020.  The daily rate of rides remained high and stable on the Manhattan Bridge and the Williamsburg Bridge suggesting that  more people made the decision to commute by bike now that the Brooklyn bridge has a separate protected bike lane. The Brooklyn bridge provides a direct access between Dumbo in Brooklyn and the financial district where many New Yorkers go to work daily.

While separating the bike lane from the pedestrians was already a major step in improving bike riding safety on the Brooklyn Bridge, the 8 foot wide two-way bike lane remains extremely tight.  Recommendations from The National Association of Transportation suggest a minimum 12 feet wide for bidirectional bike lanes. With the surge not only in regular bicycles but also in various types of e-bikes, e-scooters and cargo-bikes, it can sometimes be dangerous for people to cross on the 8 feet wide bike lane. Cargo bikes that have been promoted by the city to reduce truck traffic are wider than 4 feet and can create collision risks. Additionally, people on moppeds that are  not supposed to be on bike lanes break the rules and use a considerable amount of space while passing cyclists and create additional risks of accidents on a tight bike lane.  It will also be interesting to see if, now the borders are re-opened, if tourists on bikes decide to use the bridge… the tight lanes do not really allow for a picture stop.