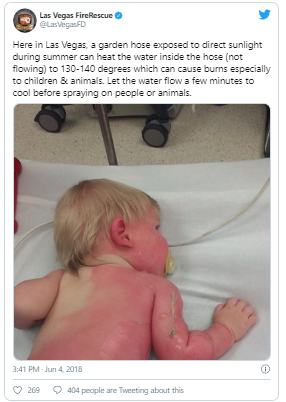 Every summer emergency room doctors and vets treat cases of children and pets who suffered burn injuries from scalding garden hose water. Water sitting in a garden hose under the sun for hours can reach scalding temperature that can burn children or pets. During a heat wave it is common for kids to play with the garden hose to refresh or for parents to use it to fill the kiddie pool or to spray their pets.  When doing so, parents should make sure to let the water run and check the temperature before using the hose.

A few days ago a mother in Florida was charged with child neglect resulting in great bodily harm after she neglected to seek treatment for her toddler who suffered permanent scaring from burn injuries after he was sprayed with hot water from a hose. According to Yahoo News, Jessica Smith a 24 year old divorced mother, admitted that her child was sprayed with hot water from a hose by another kid but she didn’t seek medical care because she was afraid that the Department of Children and Families (DFC) would get involved and that she would loose custody of the child.  The child’s father described the child as “permanently disfigured” by the burns and he alerted the DFC.

Similar accidents occurred in the past. A few years ago the Las Vegas Fire Rescue team circulated the picture of a 9 month-old boy who was accidentally burned by his mom as she was filling the kiddie pool and accidentally sprayed him.  The child had to be treated for second-degree burn injuries.

Pets also are being brought to the vets during the summer because they have been accidentally sprayed with hot hose water by their owners.

These terrible accidents are a reminder for parents to take precautions with the garden hose if they have children or animals around the house. Storing the garden house in a shaded area instead of under the scorching sun is the best way to prevent accidents and if this is not possible parents should make sure they check the water temperature before spraying kids or pets.