The campaign entitled “Speeding Ruins Lives, Slow Down” is the largest investment in public safety awareness since Vision Zero was launched in 2014. It  comes in the steps of a previous $900 million investment in street safety that is being used to physically redesign 1,000 dangerous intersections located in the New 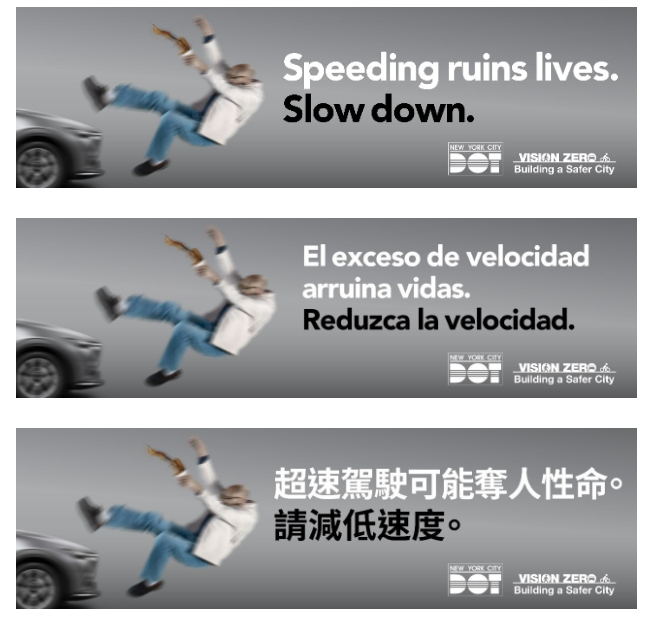 The “Speeding Ruins Lives, Slow Down” safety campaign will feature ads on radio and television, billboards, gas stations, linkNYC kiosks, bus shelters, and more.  It will be published in nine different languages to improve the outreach level.

A giant billboard  will be installed on Pennsylvania Avenue in East New York featuring an English version of the campaign. East New York is one of the areas in New York City that has the most accidents caused by speeding. One of the reasons why there are so many speeding accidents there, is that the streets of East New York did not receive the “safety treatment” that streets in Manhattan and other wealthy neighborhoods received. As a result, this poor neighborhood is still crossed by major boulevards with multiple car lanes, very little opportunities for pedestrians to cross the road safely and almost no protected bike lanes. Identified by mayor de Blasio as dangerous corridors a few years ago, many streets of East New York remained mostly the same except for the addition of speed cameras. Recently, Mayor Adams repeated that East New York was a Vision Zero priority and said that major safety and street redesign projects were currently underway.