The Bureau of Labor Statistics recently released the preliminary data from the Census of Fatal Occupational Injuries (CFOI) for  2014.   There where 4,659 fatal work injuries  in 2014.   This is the highest number of fatalities since 2011.

This high number of deaths on work sites is mostly explained by a revitalized economy and a decline in the unemployment rate in 2014. The rate of  workers fatalities stayed the same as the previous  year with 3.3 fatal work injuries per 100,000 full-time equivalent workers. Over the long term, the rate of worker fatalities has been slowly decreasing over the years indicating safer work conditions globally. 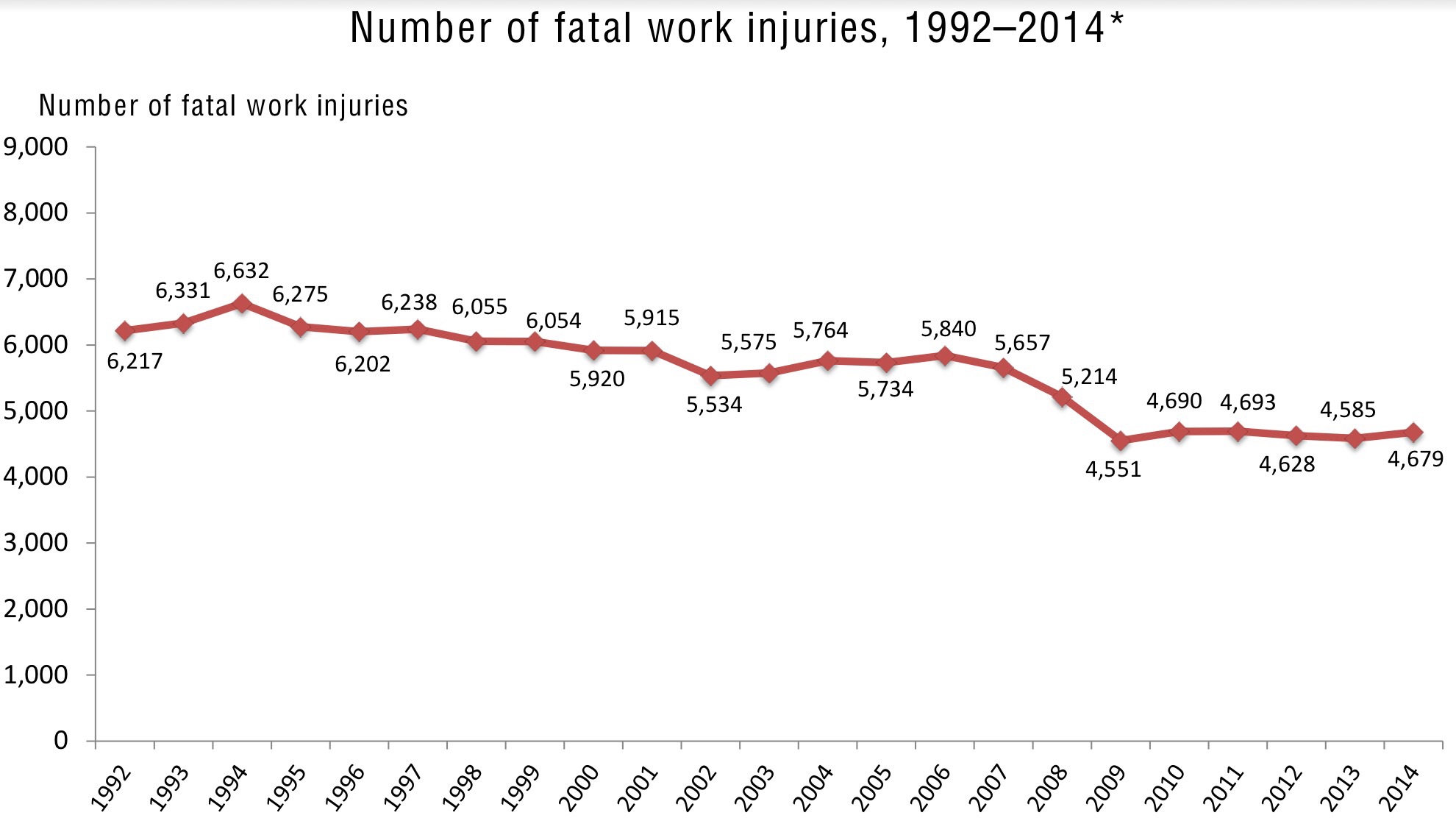 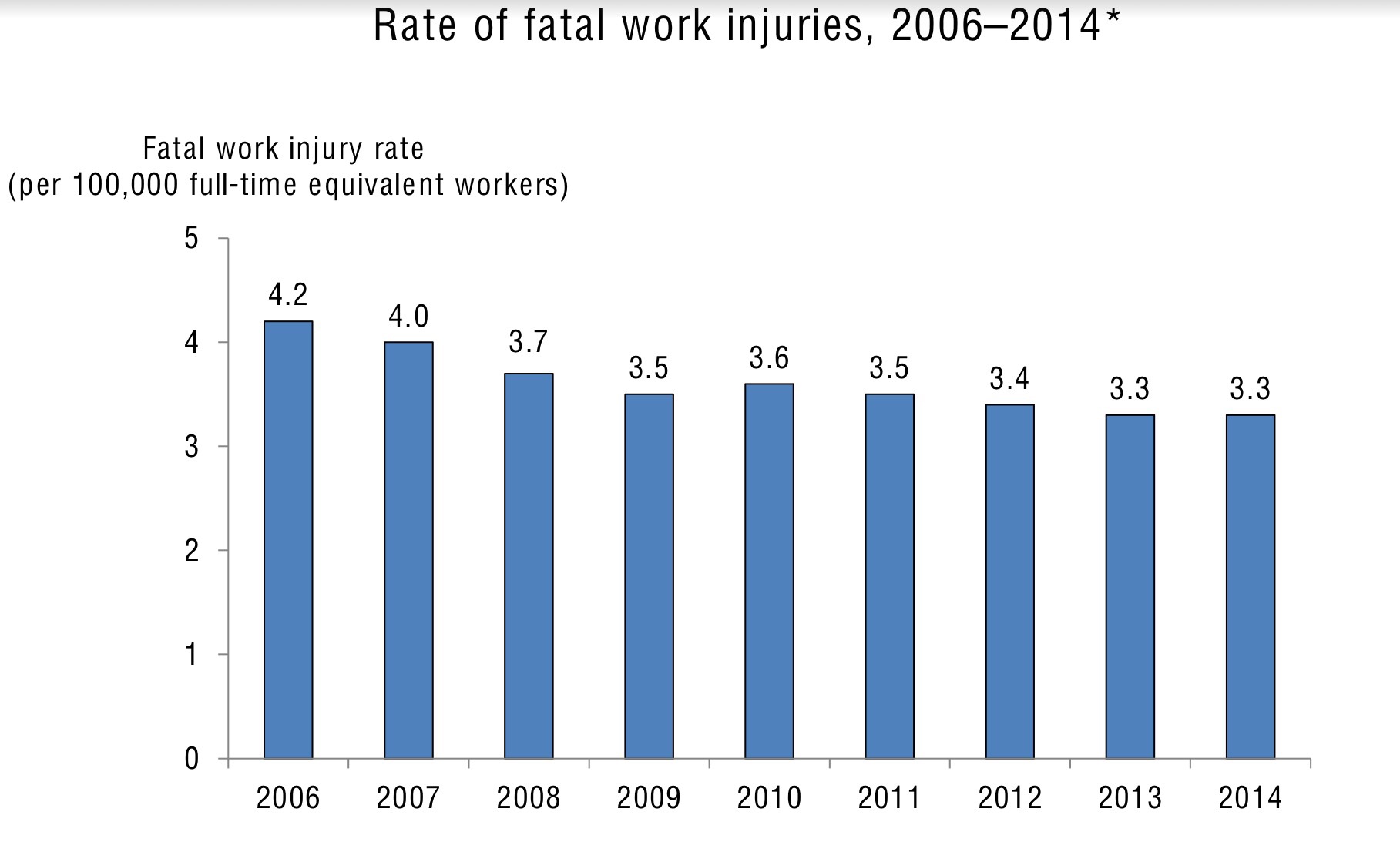 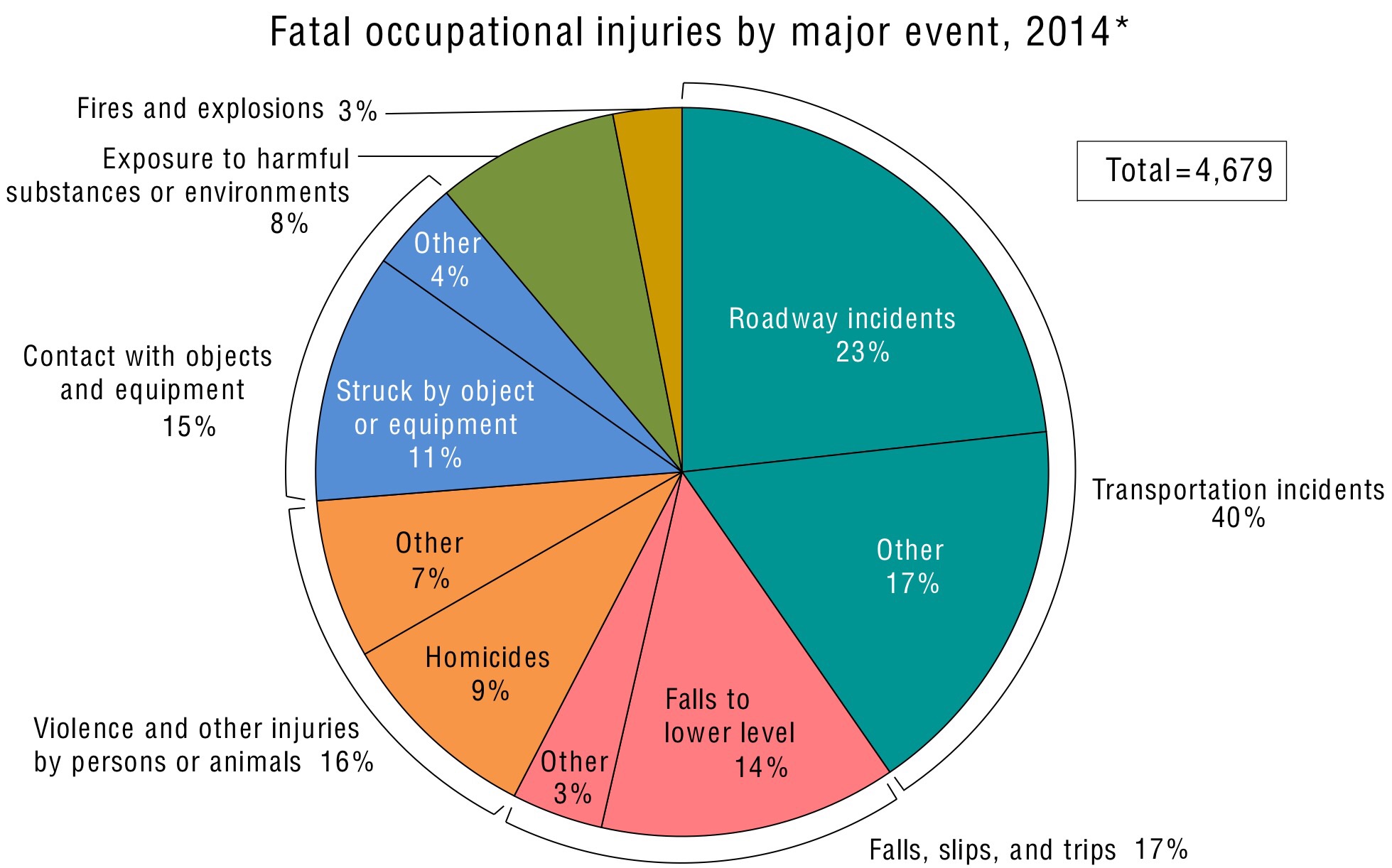 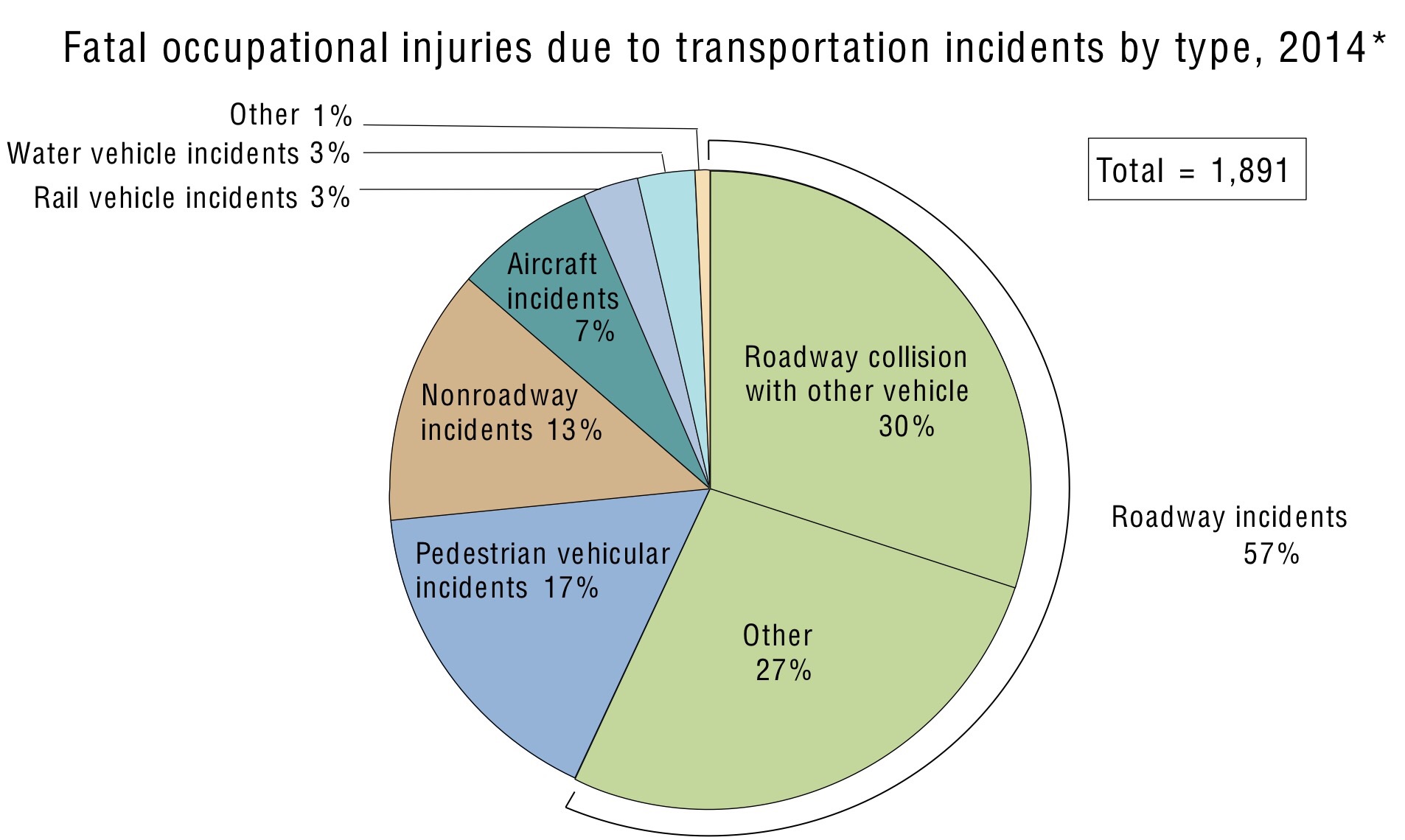 Falls to lower level were the second most important cause of  work fatalities with 647 workers dying in a fall in 2014. The most deadly falls were falls from 6 to 10 feet and falls from above 30 feet. 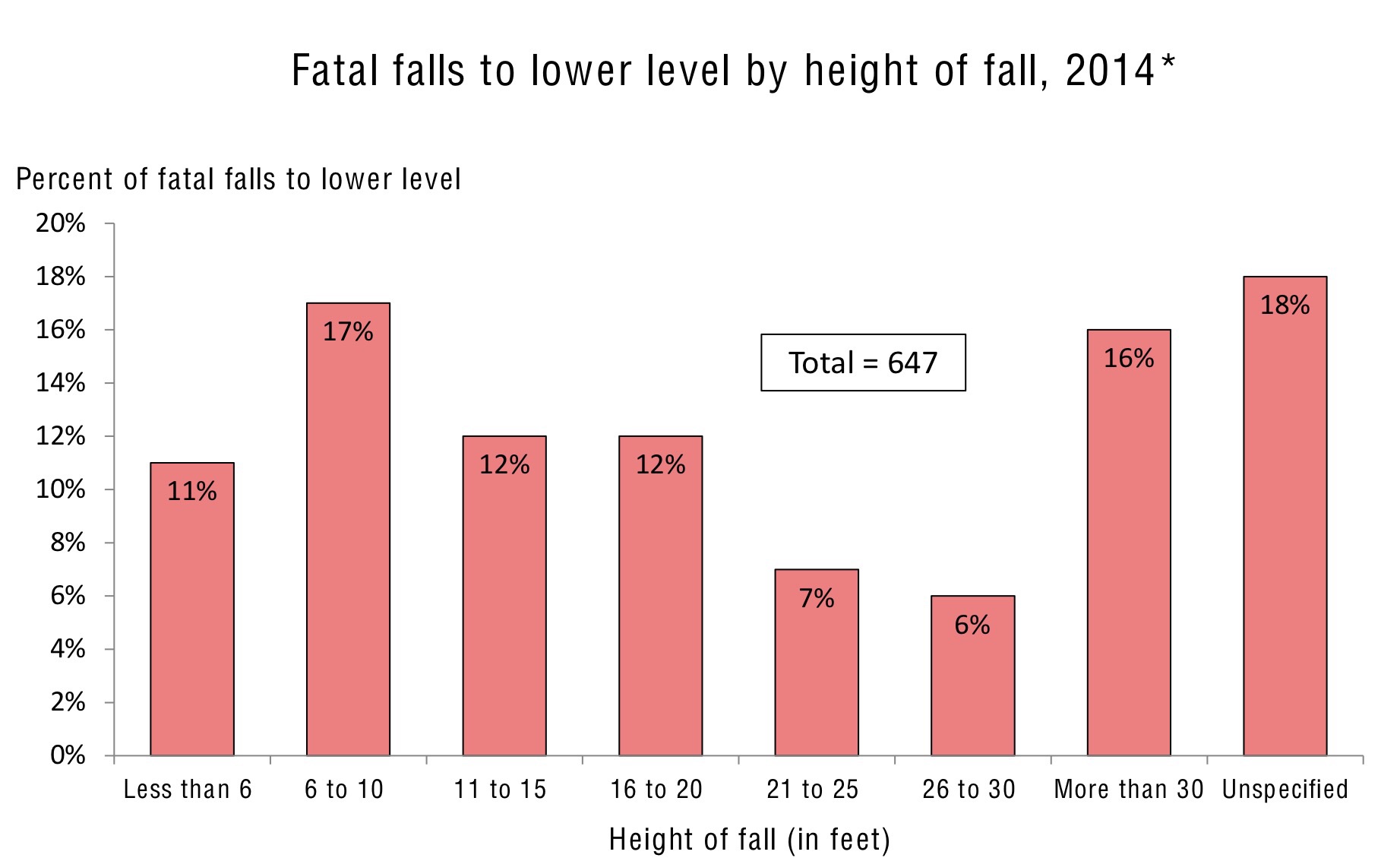 Compared to the previous year,  there was a significant increase in fatal falls, trips and  slips as well as more deaths related to chemical exposure.  Fatal transportation accidents  where also on the rise. There was a significant decrease of fatalities related to  violence and injuries by other persons and animals as well as a smaller decline in fatalities related to contact with objects  and equipment or caused by fires and explosions. 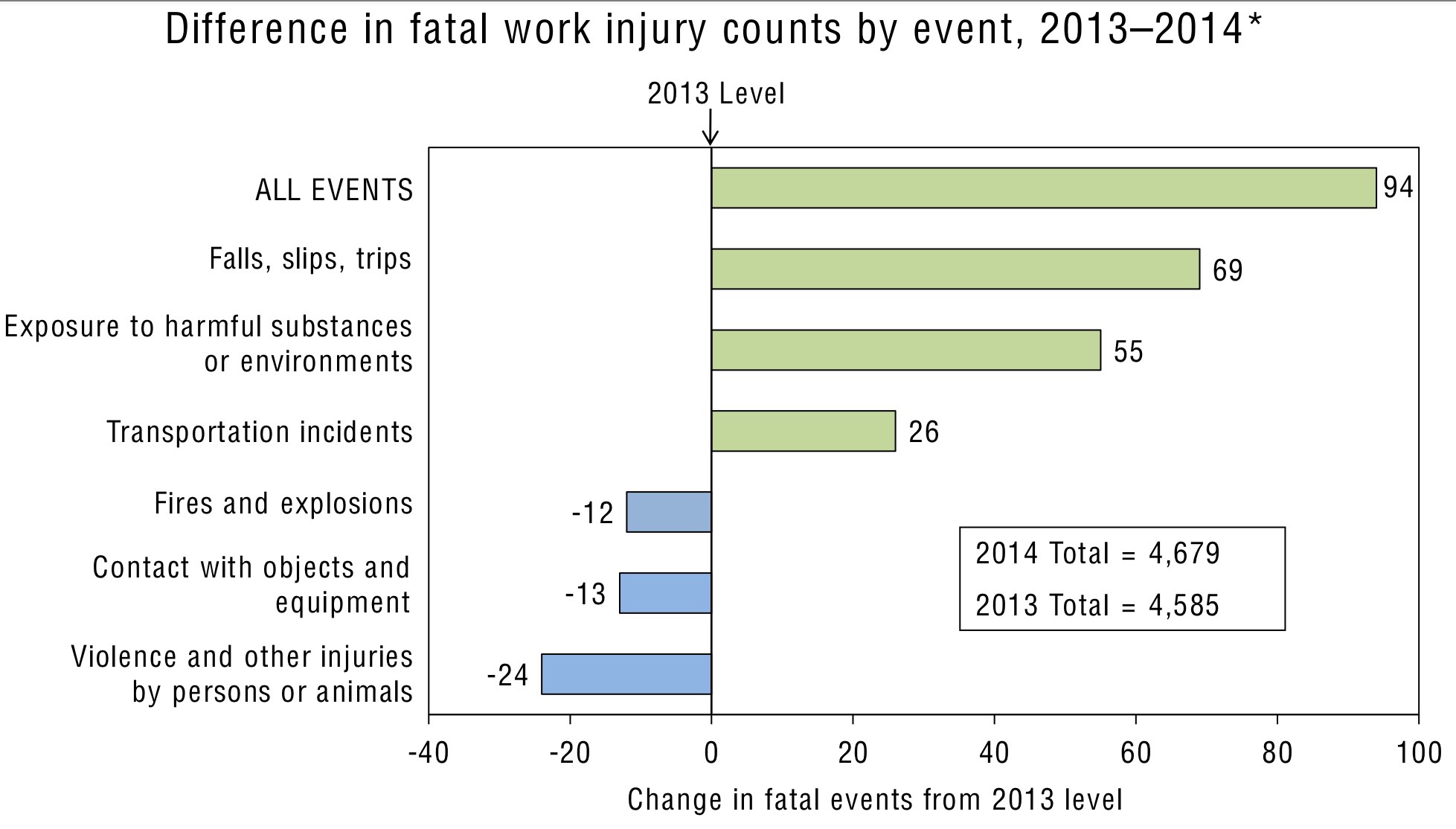 Around 17%  of the workers who died on the job  are Latinos. Last year, there were 789 compared to 817 in 2013. The majority of  them were Latinos born out of the country. Mexican have the highest number of work fatal injuries among all foreign workers born out of the country. It is our opinion that this is a result of many of them being out of status and forced to work under unsafe conditions with little or no training. 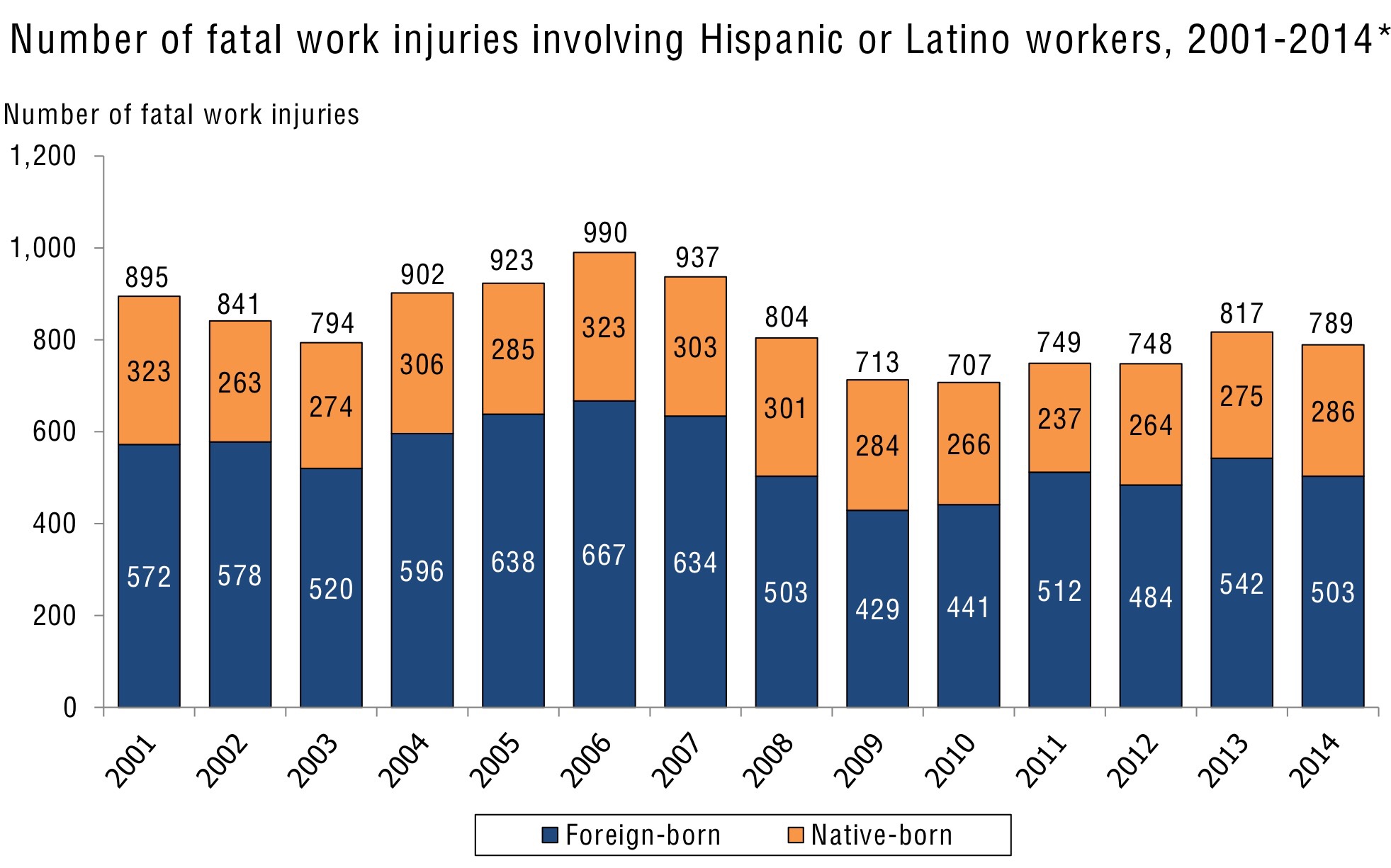 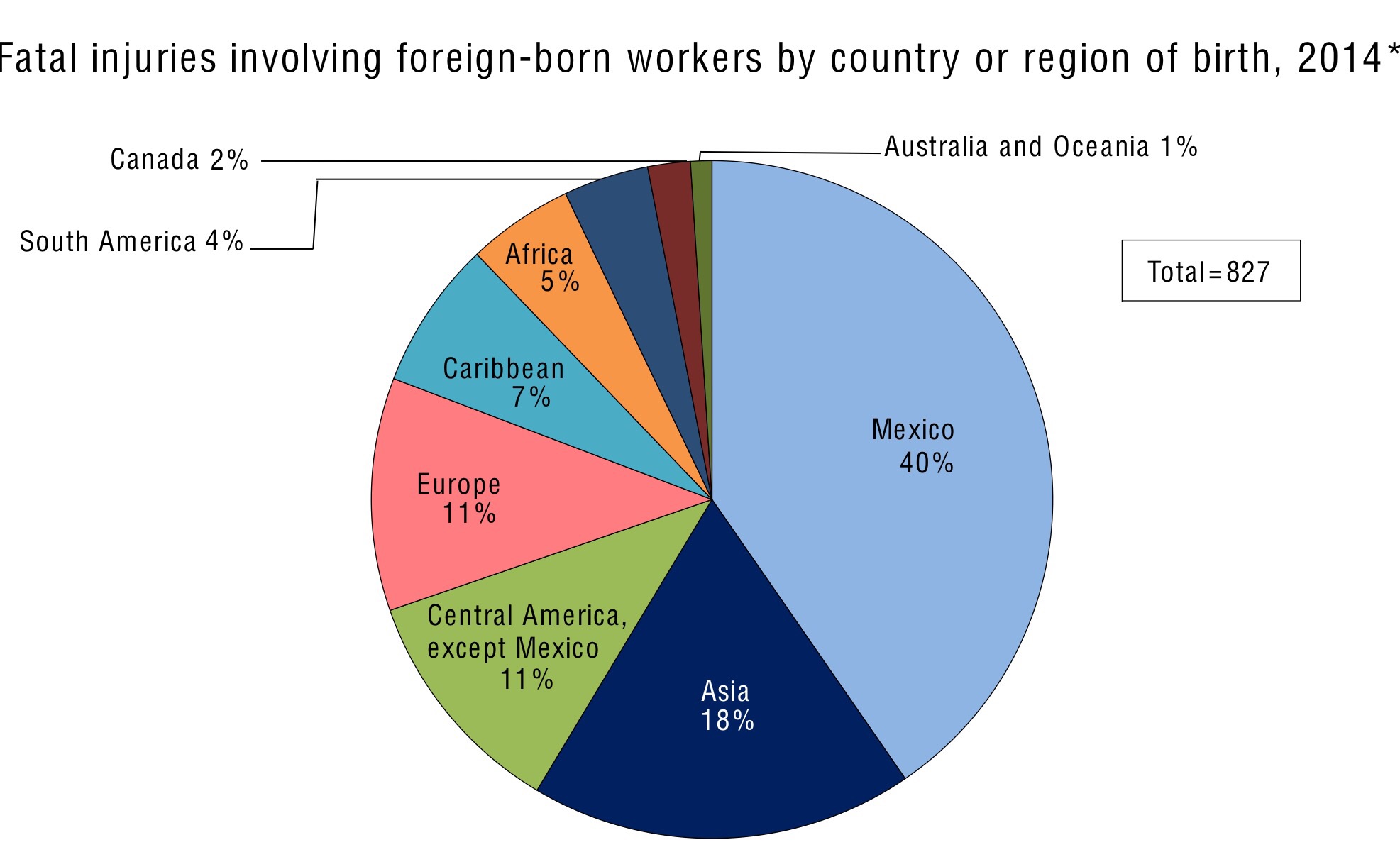 Workers above 45 years old have a higher risk of death in a work accident especially those above 65 years old.  While the average work fatality rate was 3.3 deaths for 100,000 full time workers  in 2014, the same rate was 10.2 for workers above 65. 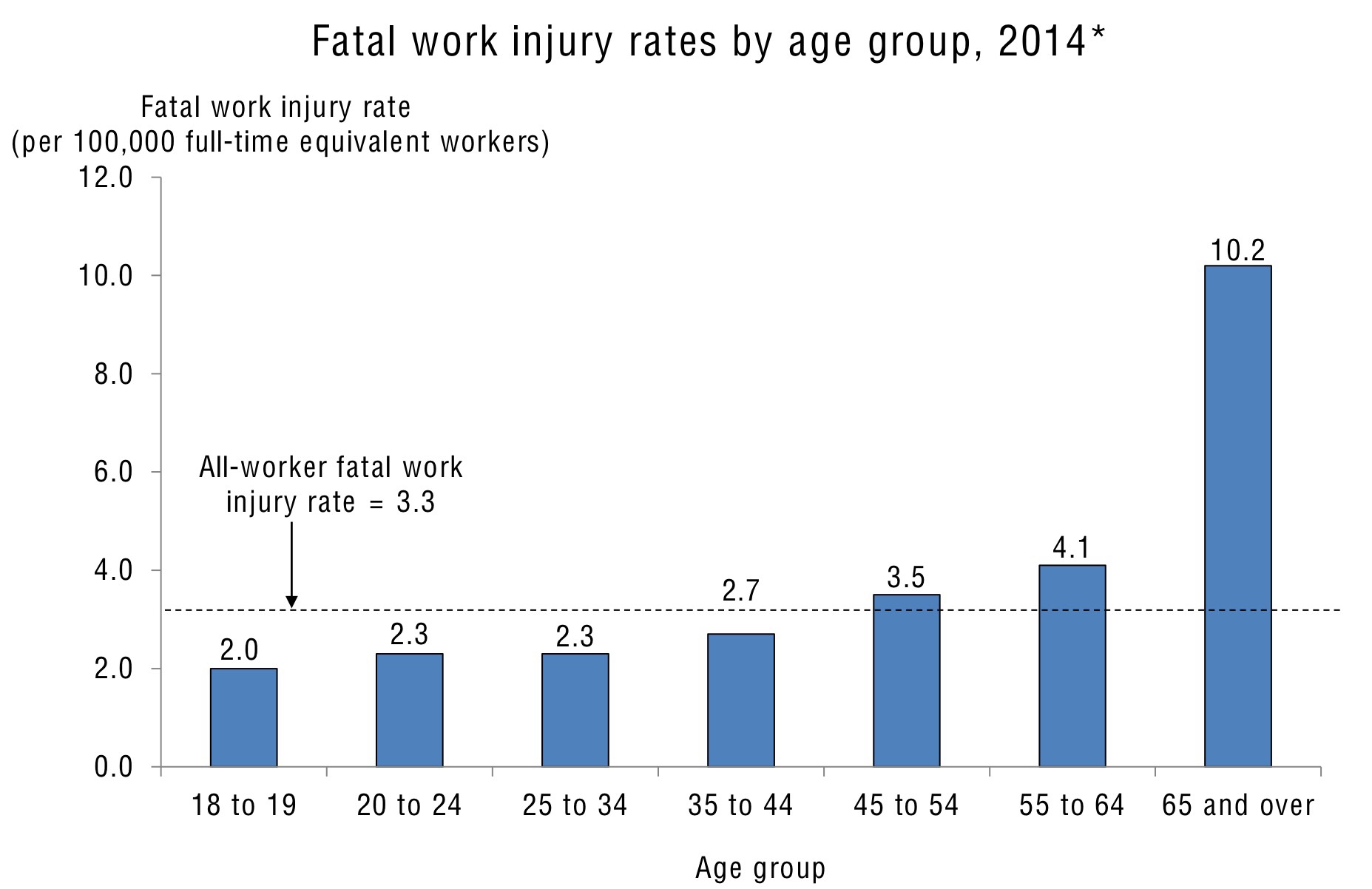 Agriculture, forestry, fishing and hunting is the most dangerous industrial sector to work in with a  fatal work injury rate of 24.9 deaths  for 100,000  full-time workers. 568 workers died last year in this industry sector.  The industry sector with the most deaths was  the construction industry with 874 hard hats dying on construction sites last year. 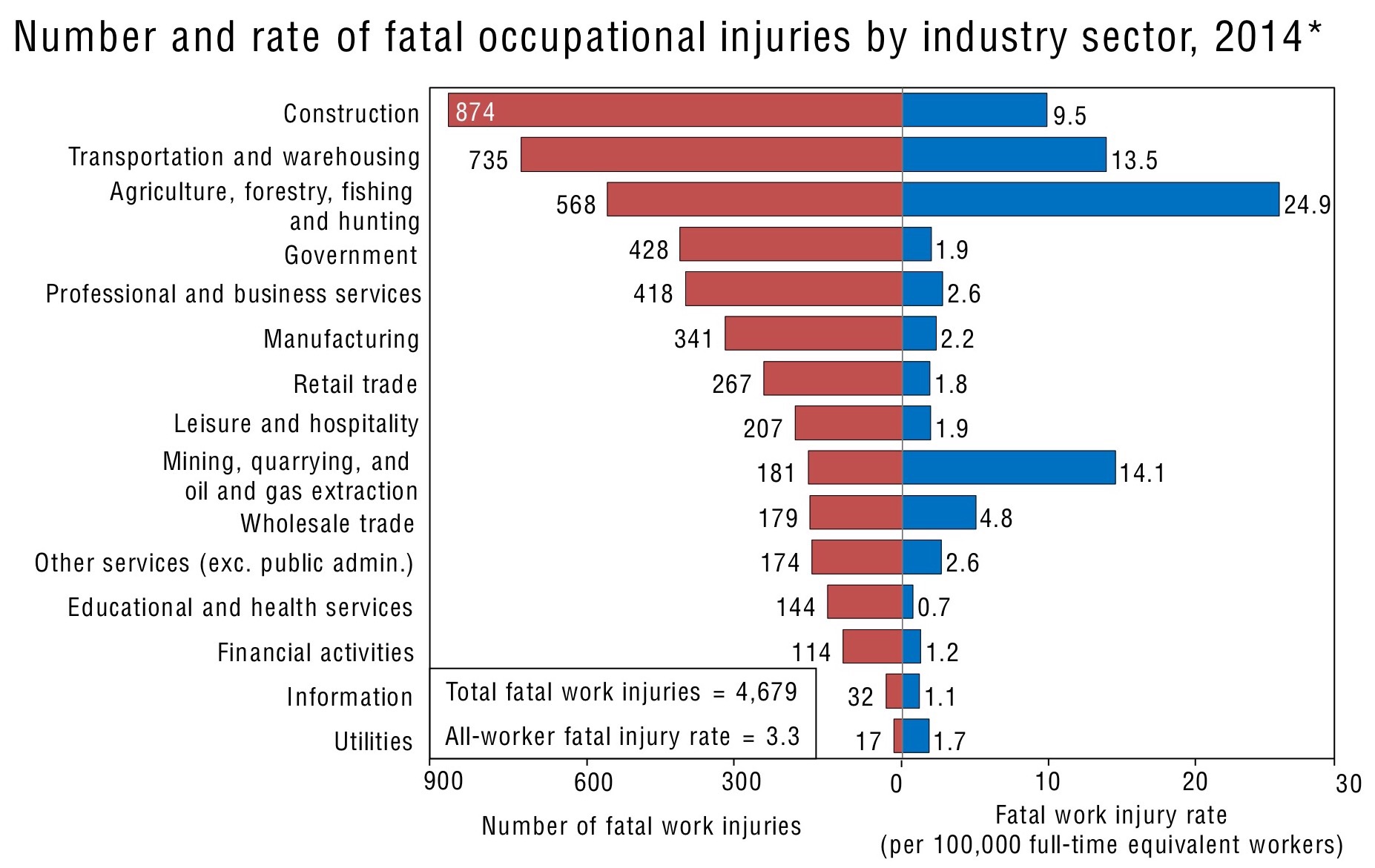 Texas had the most occupational fatal injuries, followed by California, Florida and New York. 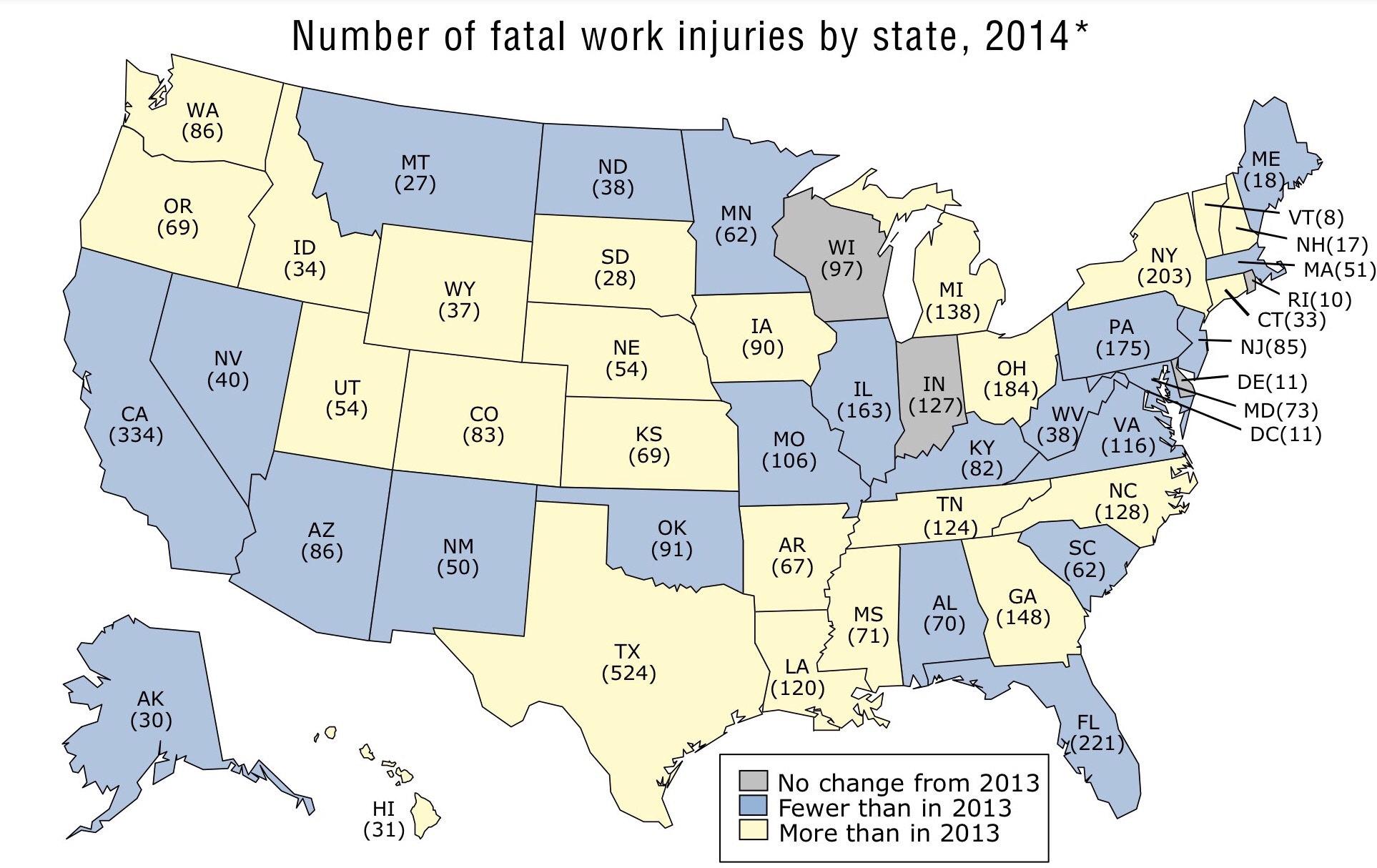