The MTA is rarely interested in settling man-under cases before trial and if it loses it will keep fighting through appeals. Out of the 92 lawsuits filed in the last five years, the MTA won 73 of them. For nine cases the payments were on average $40,000. Only five big cases resulted in total payouts of $33 million.

The train accident in which Two Metro North commuter trains serving New York City collided last May could have been avoided. Robert Puciloski, the Metro-North chief engineer admitted that poor track inspection and poor maintenance led to the accident. He was testifying yesterday before the National Transportation Safety Board (NTSB) investigative hearing in Washington.

The report was vague and there were no measures of the pumping conditions. The inspectors said they were pressured to work quickly so they would not interfere with the regular flow of trains.

END_OF_DOCUMENT_TOKEN_TO_BE_REPLACED

A 70 year old man died after being assaulted by another resident at Ocean Promenade Rehabilitation and Nursing Center in Rockaway, Queens, New York last night. The attacker used the leg rest of a wheel chair to beat the victim to death according to the police.A dispute over the curtain between their beds sparked the attack. The two men who were sharing the same room since July never got along according to residents. 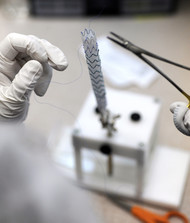 Medical Malpractice related to Cath Lab procedures are on the rise as overuse of Cardiac Stents lead to an increase of deaths linked to this type of procedure.

In a recent article on Bloomberg, Sydney P. Freedberg, describes the shocking extreme the administrators at Satilla Regional Medical Center in Waycross, Georgia went to in order to keep their cath lab operating and producing revenue.

Because of its remote location, the hospital was unable to attract competent cardiovascular surgeons. In order to keep their cath lab running the administrators paid an extravagant salary to a non qualified surgeon, Dr. Azmat whose only experience with cardiac stents was a two weekend course experimenting on cadavers and pigs.

END_OF_DOCUMENT_TOKEN_TO_BE_REPLACED

Exposure to silica significantly increases the risk of developing lung cancer according to a new study published in The American Journal of Epidemiology. The study measured cumulative silica exposure in a group of more than 30,000 workers over a 44-year period and demonstrated that silica is a human carcinogen. The study also suggests that current exposure limits in many countries might be insufficient to protect workers from lung cancer.

These findings are consistent with the preliminary risk assessment in OSHA’s new proposed rule to protect workers from occupational exposure to crystalline silica.

At least 19 children under the watch of the ACS died because the agency ignored recommendations to improve its practices according to a report from an investigative grand jury impaneled in Brooklyn after 4-year-old Marchella Brett-Pierce’s 18-pound body was found beaten, drugged and starved to death by her mother in Sept. 2010.

The number of deaths resulting from Medical Errors in Hospitals have been grossly underestimated according to new estimates developed by John T. James, a toxicologist at NASA’s space center in Houston. James runs an advocacy organization called Patient Safety America that he created after his 19 year old son died as a result of medical malpractice in a Texas Hospital.

In 1999, “To Err is Human Report“, estimated the number of deaths resulting from medical errors in hospitals at 98,000. In 2010, The Office of the Inspector General for Health and Human Services said that bad hospital care contributed to the deaths of 180,000 in Medicare patients alone in a given year.

According to the study published in the current issue of “Journal of Patient Safety” these numbers are too low and the true number of premature deaths associated with preventable harm to patients is estimated at more than 400,000 per year.

Our partner, New York Personal Injury Lawyer Howard Hershenhorn, represents the Bronx family of a four-year old girl who has been severely burned (see picture of Haile Martinez) and her seven year old sister who died from smoke inhalation and burns covering 80 percent of her body after a kitchen fire was sparked by an improperly installed stove.

Two weeks before the deadly accident, the super installed a new stove in the apartment. According to Hershenhorn, “The super positioned the appliance so close to the wall, it crushed the electrical cord, damaging it to the point where it ignited”. This was confirmed by the FDNY Bureau of Fire Investigation incident report that listed “Appliance Cord” as the cause of the fire.

The family’s lawsuit additionally faults the landlord for not installing the required kitchen smoke alarm, and for “spoilating the evidence” by dismantling the charred kitchen the day after the fire.