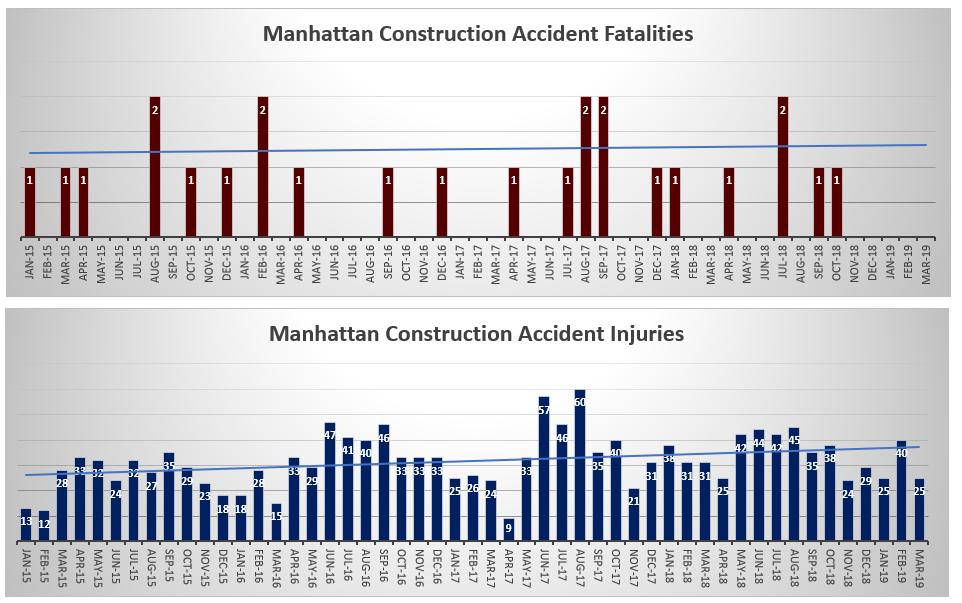 Bronx has a low number of  injuries and deaths on construction sites. Since the begining of 2015 until the end of March 2018 two workers died and 129 of them were injured. During the first trimester of 2019 10 workers were injured compared to respectively 5, 5, 8, 1 and 1 during the first trimester of 2018, 2017, 2016, and 2015. Despite being low the number of injuries in the Bronx has been increasing significantly over the last 3 years. This may also reflects an increase in construction developments in the Bronx. 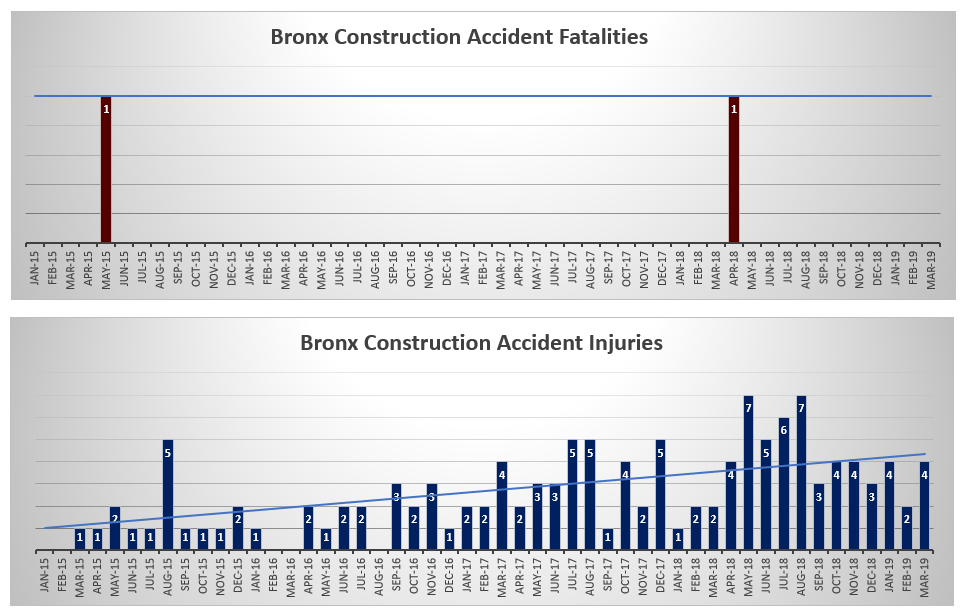 In Brooklyn both hard hat fatalities and injuries are on a rising trend. 23 workers were injured during the first trimester of 2019 compared to respectively  36, 19, 16 and 8 during the same period of 2018, 2017, 2016, and 2015. Both deaths and injuries rose with the boom in new constructions in Brooklyn over the recent years. 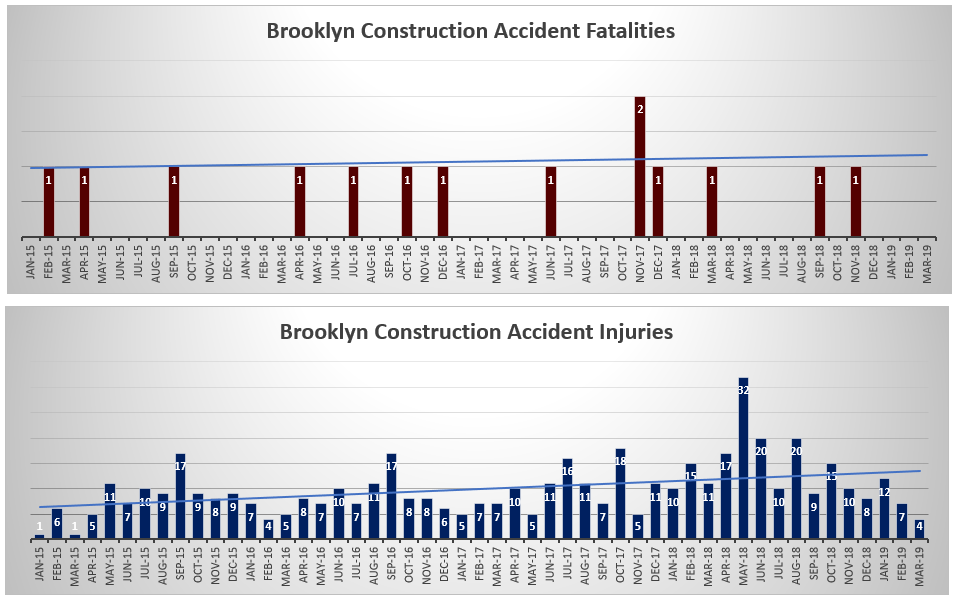 In Queens fatalities at construction sites are not that common except for November 2016 when 2 workers died in the same month. Since 2015, 5 constructions worker deaths were reported to the DOB. The last one was in March 2018.  Injuries are on a slight rise. The highest they went was 17 in June 2017. So far since the beginning of the year they stayed below 10 per month. 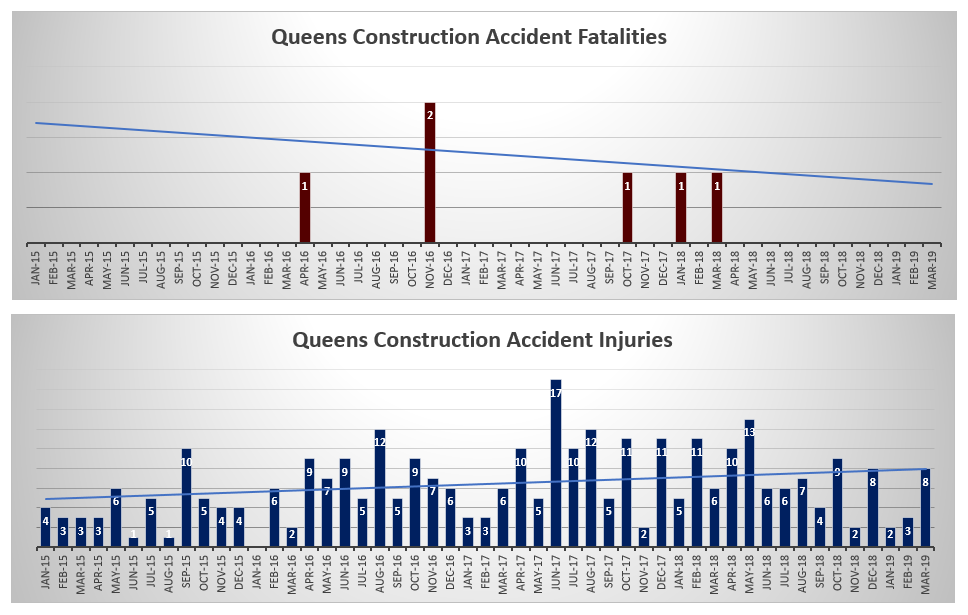 Staten Island has the lowest number of hard hat deaths and injuries of all five NYC boroughs. Since 2015, 1 construction worker death and 58 injuries were reported. Despite their low numbers injuries are also on the rise in Staten Island. One worker was injured during the first trimester. 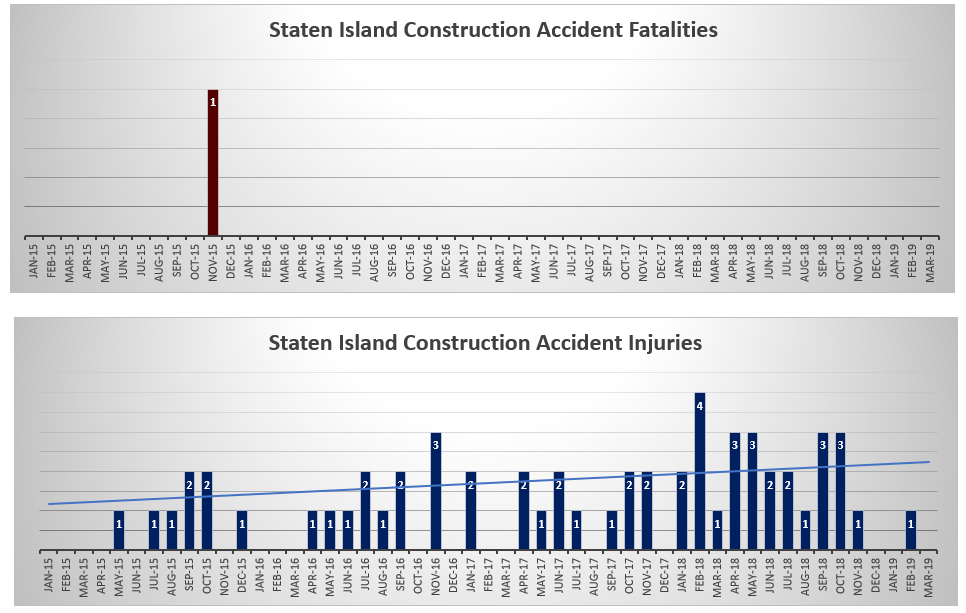 Injuries and deaths related to falls are the most common not only in New York but in the entire construction industry. Falling material also causes injuries to workers every month. Excavation and soil work continues to be one of the most dangerous activities on construction sites. Injuries not only to workers but also to pedestrians also occur on a regular basis with scaffolds, sheds, fences and shoring.  Deaths and injuries while using mechanical construction equipment are also quite common at New York sites.

Many types of injuries can occur at a construction site and they can’t all beclassified in specific categories therefore the DOB has a lot of them classified under “other” which sometimes can be questionable. For example the DOB classified under other, a worker who had to be hospitalized after falling five feet from a ladder while it categories most ladder accidents as “fall”. Many non-life threatening injuries are also classified under “others”. An electrician who lost his balance and cut his hand while trying to reach for something to grab, a construction worker who got concrete splashed onto his eyes and a ladder that fell on a worker during high wind were among the many accidents that were classified in the “other” category during the first trimester of 2019.

One worker was injured in NYC during the first trimester while doing excavation and soil work. The accident occurred in Brooklyn at 1797 Broadway on January 3rd. The worker was guiding piles into place when a pile shifted injuring the worker’s leg. An Aggravated Level 2 ECB Violation was issued for a failure to safeguard. A full Stop Work Order  and a DOB Violation were also issued. 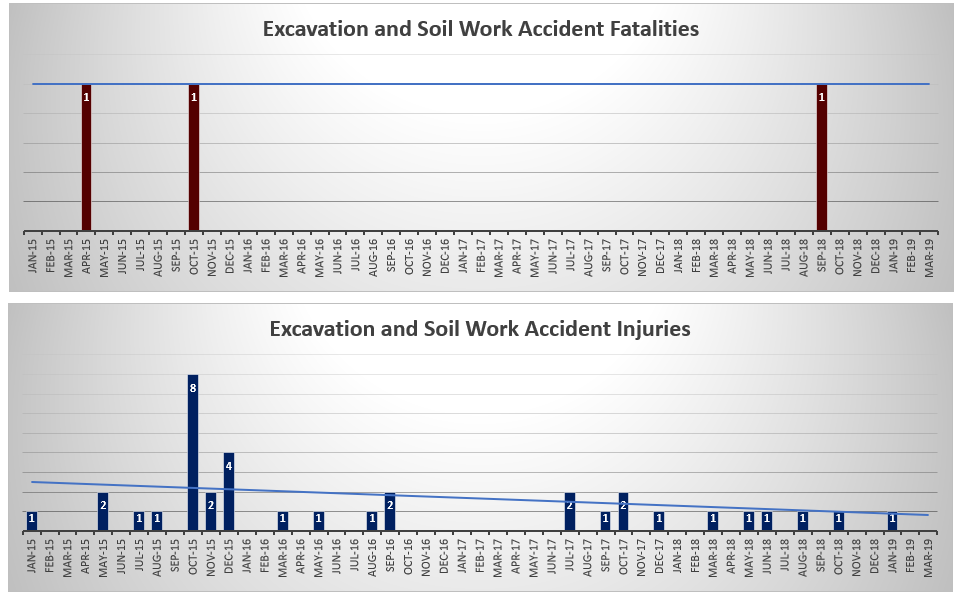 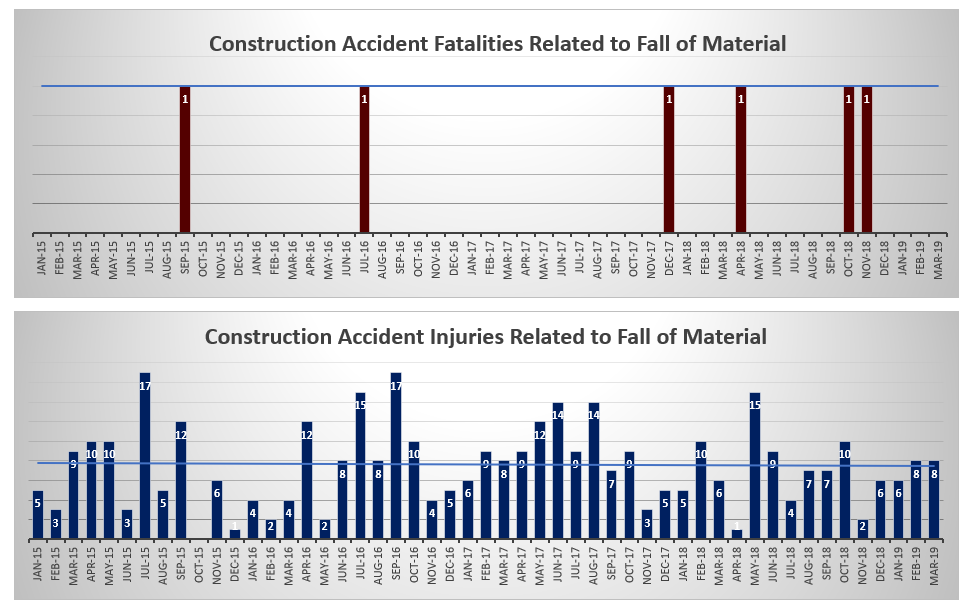 3 construction workers were injured while using mechanical or construction equipment. Among them, a worker on a Bronx construction site who was using a pump to pour cement grout into a concrete masonry unit wall. As he was pouring the cement grout, the hose got blocked, which caused pressure to build up inside the hose. All of sudden the pressure released. As a result, the hose knocked the worker down, hit him in the head and caused him to fall down approximately two feet from one scaffolding deck to the next level. 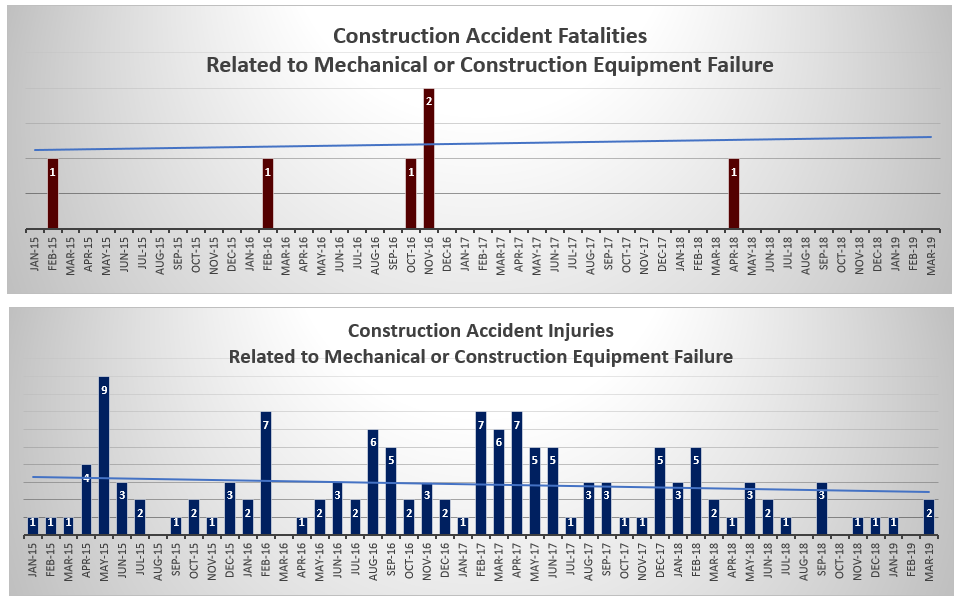 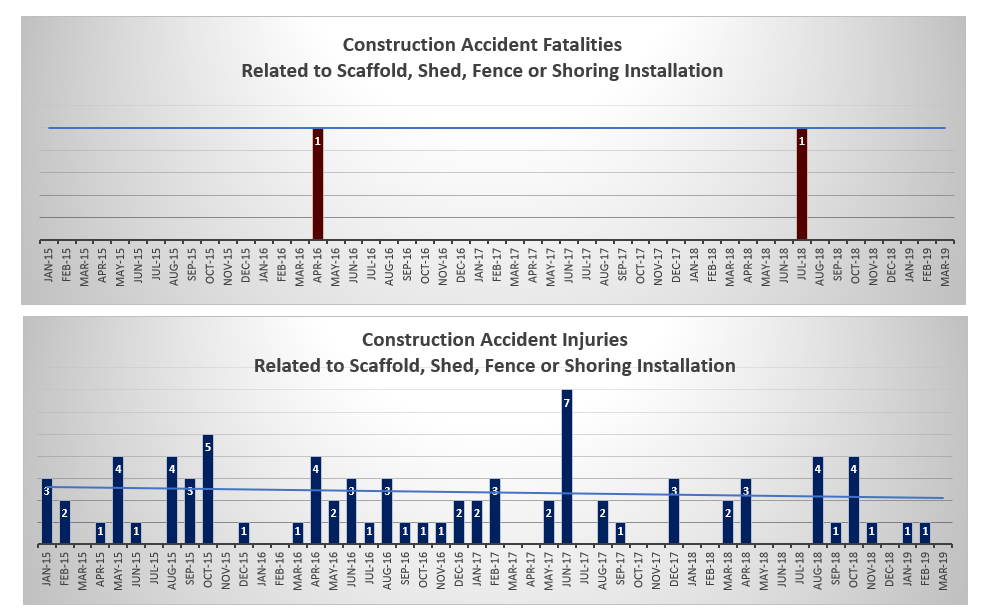 According to the DOB records, there were no construction accident fatalities related to fall during the first trimester of 2019. 27 workers were  injured in fall accidents during the same period. Many of the falls involve workers falling from ladders. The icy weather was also a factor in several falls.  Baker scaffold that were not proprely secured caused two workers to fall in two separate accidents. 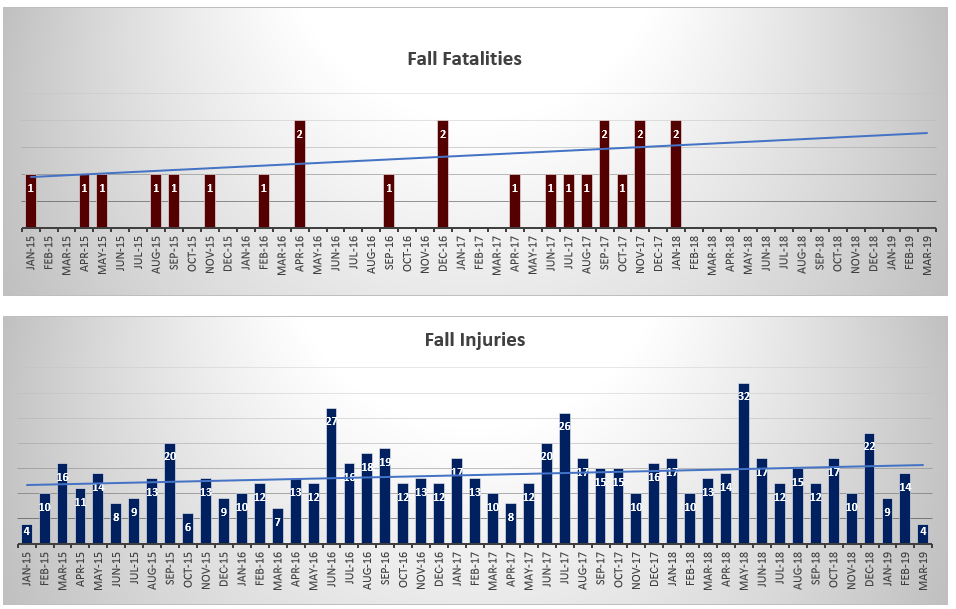