11 people died in auto accidents in New York City last May compared to 20 in April and 18 for the same month a year ago. This is a the lowest number of traffic deaths recorded since March 2016 where the number was also 11. This record low number of auto accident deaths occurred despite traffic accidents reaching 20,689 during the same month. This is the highest number of monthly motor vehicle accidents ever recorded in the city. The month before there were 17,585 motor vehicle accidents and 19,911 in May last year.

Traffic accidents in the city have been on a rising trend.  However it is only the second time that this number is above 20,000. Before that, the monthly number of accidents only went above 20,000 once in October 2015. (Click on graphs for full size)

While the number of traffic accidents has been increasing steadily, the number of deaths related to theses accidents have been declining over the last 4 years. This decline may be explained by the various street safety initiatives that have been launched under the umbrella of the Vision Zero Program to reduce traffic deaths in the city.

There are less and less deaths on the streets of New York City but there are more and more injuries.  Last May, 5,314 people were injured in motor vehicle accidents in the City compared to 4,444 the month before and 5,415 the same month a year ago. While the number of people injured in car accidents was higher in May 2016 than in May 2017, the global trend of car accident injuries is on the rise.

The number of motor vehicle accidents has been rising faster that the number of injuries and both the ratio of total deaths and total injuries compared to the total number of traffic accidents are declining in New York City. These ratios indicate that over the last 4 years the streets of New York City have become safer. 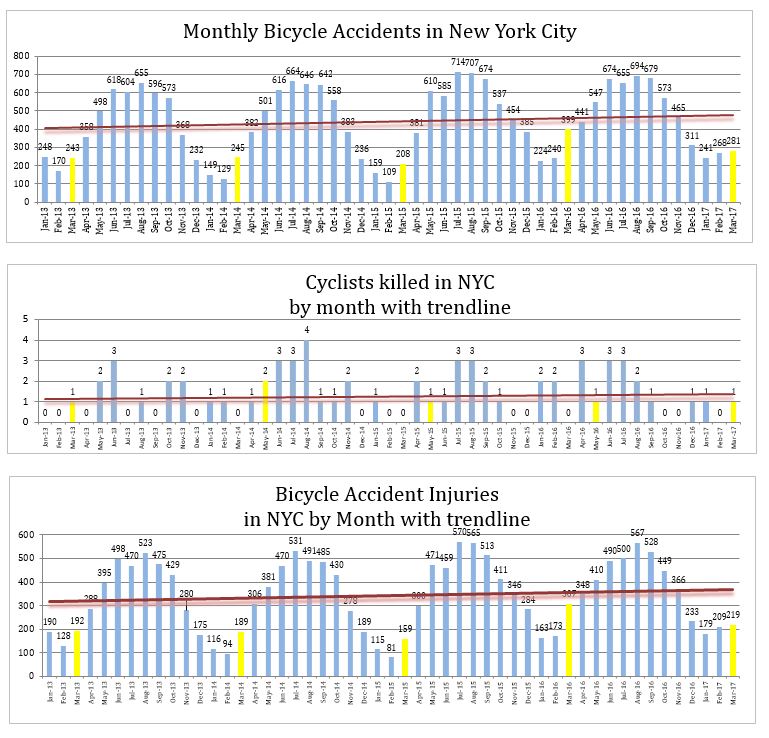 The number of truck accidents also recorded a significant increase from last April to last May. It went from 1,288 to 1,665. However it decreased compared to May 2016 when 1,723 truck accidents were recorded by the NYPD.