In an attempt to reduce the number of deaths related to these accidents, New York The de Blasio administration launched Vision Zero at the beginning of 2014. Since then, the number of fatal traffic accidents has been on a declining trend despite an increase in the total number of crashes.  After reaching a monthly record low of 11 in March 2016, fatal traffic accidents spiked again to 29 last June and 25 last August.

While Vision Zero may have helped in curbing the number of deaths on the road, the number of people injured in motor vehicle accidents in New York City continued to rise over in recent years. In August 2013, 4,846 people were injured in NYC traffic accidents. This number decreased slightly in 2014 to 4,445 before increasing again in August 2015 to 4,737 and reaching almost 6,000 in August 2016.

Among the 25 people who died in crashes in New York City in August, 15 of them were pedestrians, 2 of them were cyclists, 2 of them were passengers and 6 of them were drivers.  Compared to the same month during the 3 previous years, the number of pedestrian fatalities reached a record high for the month of August. In 2015, 11 pedestrian died. In 2014, 10 and in 2013, 12. Another concerning number is bicycle accident fatalities. From the beginning of the year until the end of August, 16 people died in a bike accident in NYC. This is 2 more than the entire year of 2015.

While pedestrians are the most at risk of dying in car accidents, motorists are the most at risk of being injured in car accidents. In August 2016, 2,288 motorists were injured in a traffic accident compared to respectively 2010, 1,511 and 1,599 during the same month of 2015, 2014 and 2013. Motorists injured in traffic accidents have been on a rising trend over the last several years. After declining to 1,448 in 2015 from 1,711 in 2014 and 1,869 in 2013, the number of passengers injured in motor vehicle accidents in New York City went up again to 1,753. Despite a recent increase in monthly numbers the trend of passengers injured in accidents is still declining so far over the last 4 years. 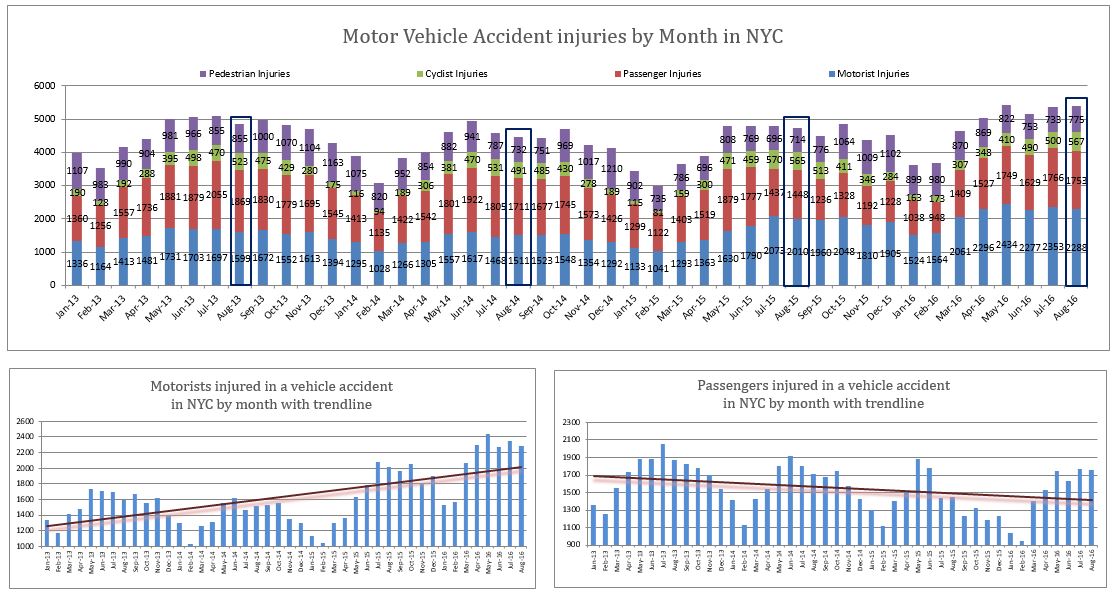 After reaching a total of 855 in August 2013, the number of pedestrians injured in traffic accidents decreased to 732 in August 2014 and 714 in August 2015, They increased again to 775 last August. Over the last 4 years, the trend of pedestrian injuries is still on the decline. The 3 month moving average for August which represents the summer months went down in August 2014 compared to 2013 and stayed pretty much stable over the last 3 summers. 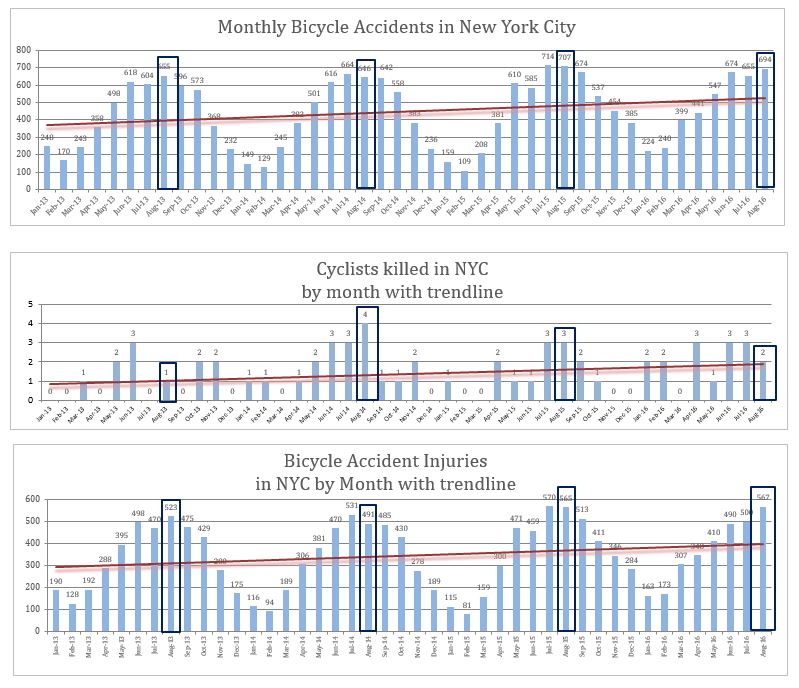 Motorcycle accidents reached a record high last August in New York City with a monthly total of 379 compared to 376 in July 2016 and 340 the same month of 2015.