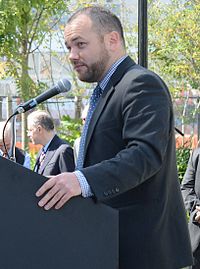 To prevent pedestrian and bicycle accidents in New York City, a new bill proposed by Corey Johnson is expected to be approved today by the City Council after Mayor de Blasio gave its approval on a delayed version.  The bill entitled NYC Street Master Plan includes the construction of 250 miles of protected bike lanes, multiple pedestrian safety measures and 150 miles of dedicated bus lanes over a five year period. Mayor de Blasio finally gave his support to the bill but on the condition that it would not start this month but in December 2021 when a new mayor takes over. Corey Johnson is one of the candidates running for NYC mayor in 2021 and if he wins he would be the one in charge of implementing his own plan.

Mayor de Blasio was not in favor of the Street Master Plan when it was proposed at the beginning of the year, arguing that his Vision Zero program was enough to make pedestrians and bicyclists safe in the city. After multiple fatal bicycle accidents occurred during the first half of the year, proving him wrong, de Blasio unveiled a five year plan dubbed the “Green Wave Bicycle Plan”, a diluted version of the “Street Master Plan” in  July.

However after bicycle accident fatalities continued to rise to record numbers in the city over the fall and the summer,  the mayor changed his mind and agreed on a delayed version of the Street Master Plan. Delaying the plan for two years means that  NYC cyclists will continue to face dangerous riding conditions at least for another 2 or 3 years.

The Street Master Plan is estimated to cost $1.7 billion over 10 years and will require significant additional funding from the city budget. Additionally the implementation of the bill is expected to face significant political backlash from some community boards who are not in favor of supporting a bill that prioritizes pedestrians and cyclists over cars.