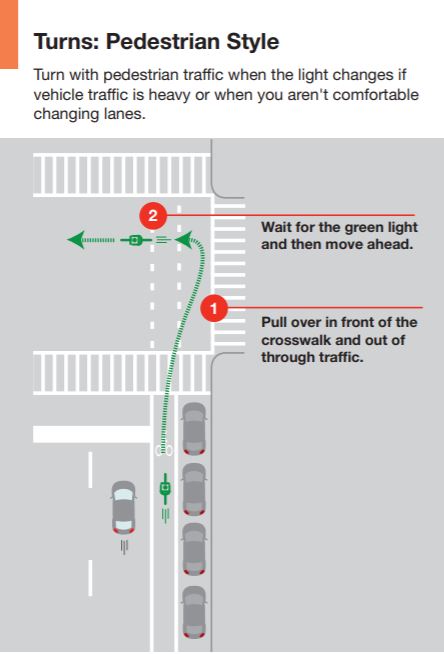 The guide covers New York City biking laws and provides basic safety tips such as watching for visually impaired, waiting for pedestrians to cross rather than biking around them as well as warning others with the bell when approaching them.

The brochure also explains how to bike with children depending on their age.  In New York, children 12 year old and younger must ride on the sidewalk while adults ride on the street. They should stop at intersections and only cross side-by-side with the supervising adult.  Children who are older than 12 year old should ride in the street, slightly ahead of the adult but side-by side while crossing intersections.

Parents should teach their children to make turns “pedestrian style” when turning left. To make a turn pedestrian style, cyclists should pull over in front of the crosswalk and out of the through traffic. When the light turns green, they should move ahead, cross the road on the side of the crosswalk and then turn left. Turning pedestrian style is the safest way to make a left turn in New York. Considering that 89% of NYC bicycle accidents occur at intersections it is worth being cautious. Newbies should definitely make a left turn that way.

For advanced cyclists who are comfortable crossing traffic lanes, making a left turn “vehicular style” involves safely coming out of the bike lane and onto the right-hand lane, carefully moving to the left-hand lane and make the left turn like any other vehicle.

Bikesmart also provides readers with navigation tips, parking and locking tips as well as options for commuters to bring their bike inside the commercial building where they are working.

The BikeSmart brochure can be downloaded here.