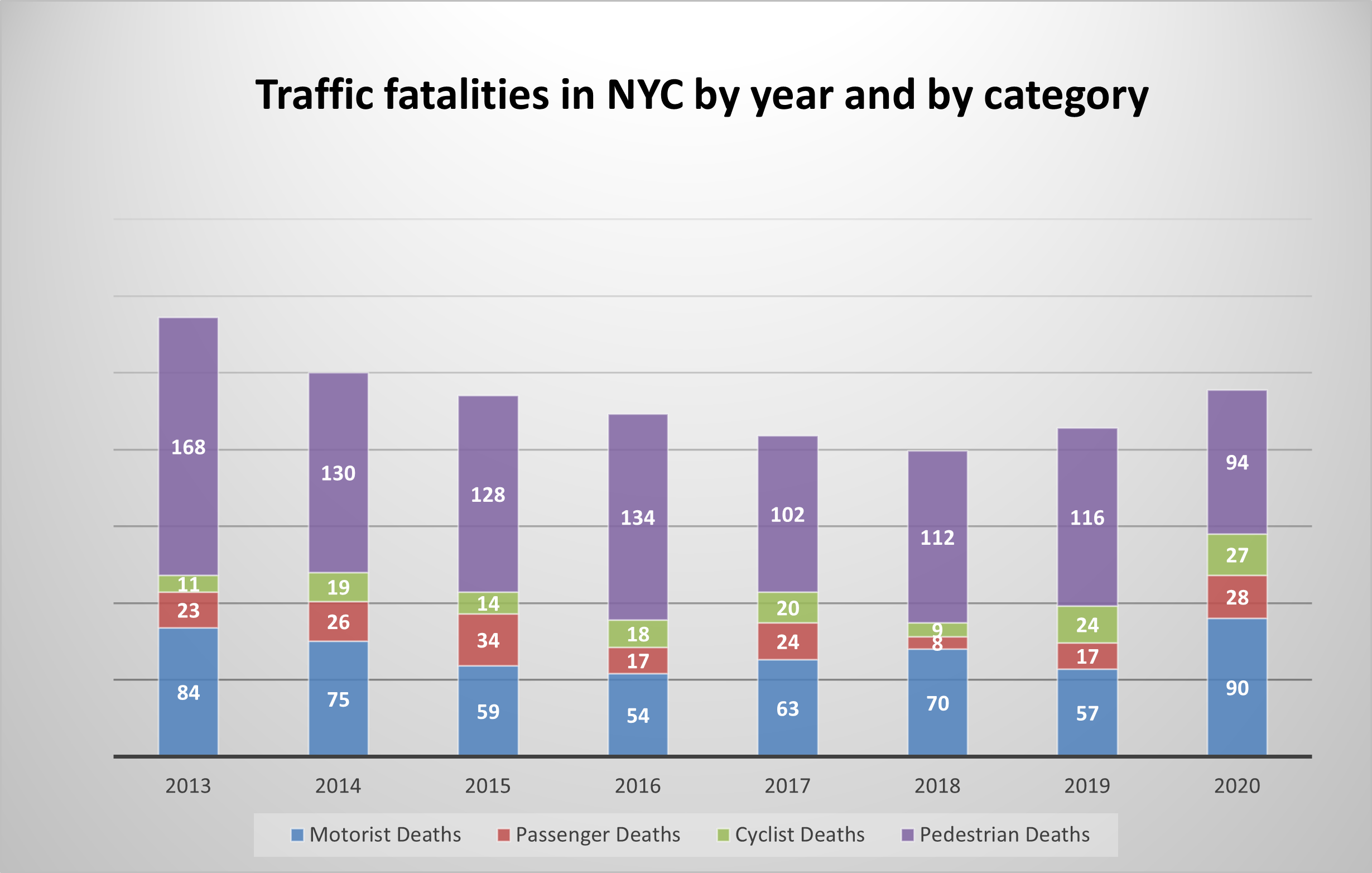 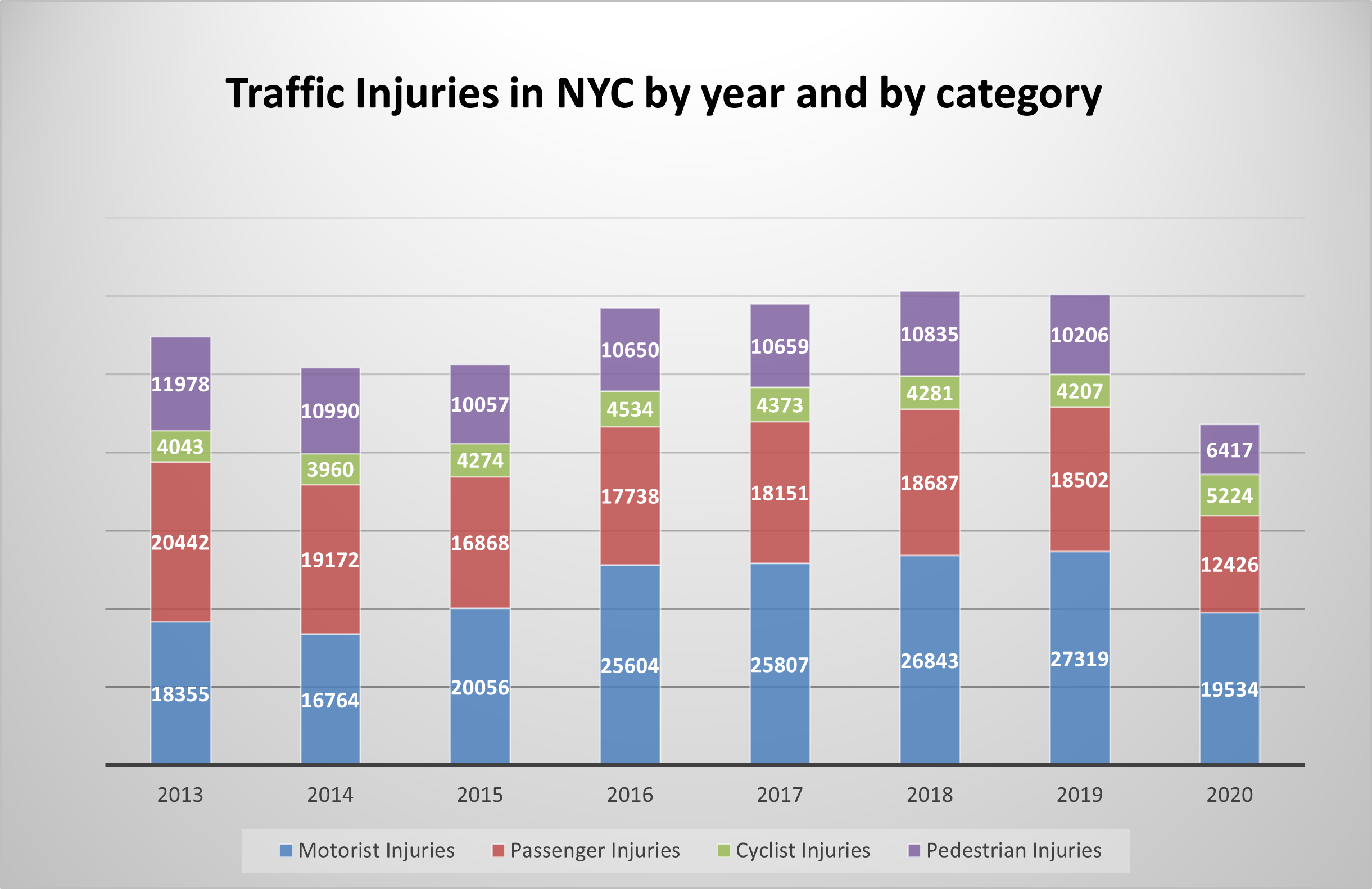 As many street safety activists predicted, the limited amount of bike infrastructures in the city is making it difficult for newbies to safely ride their bicycle from point A to point B. As a result the number of bicycle accident deaths and injuries both reached record highs last year. 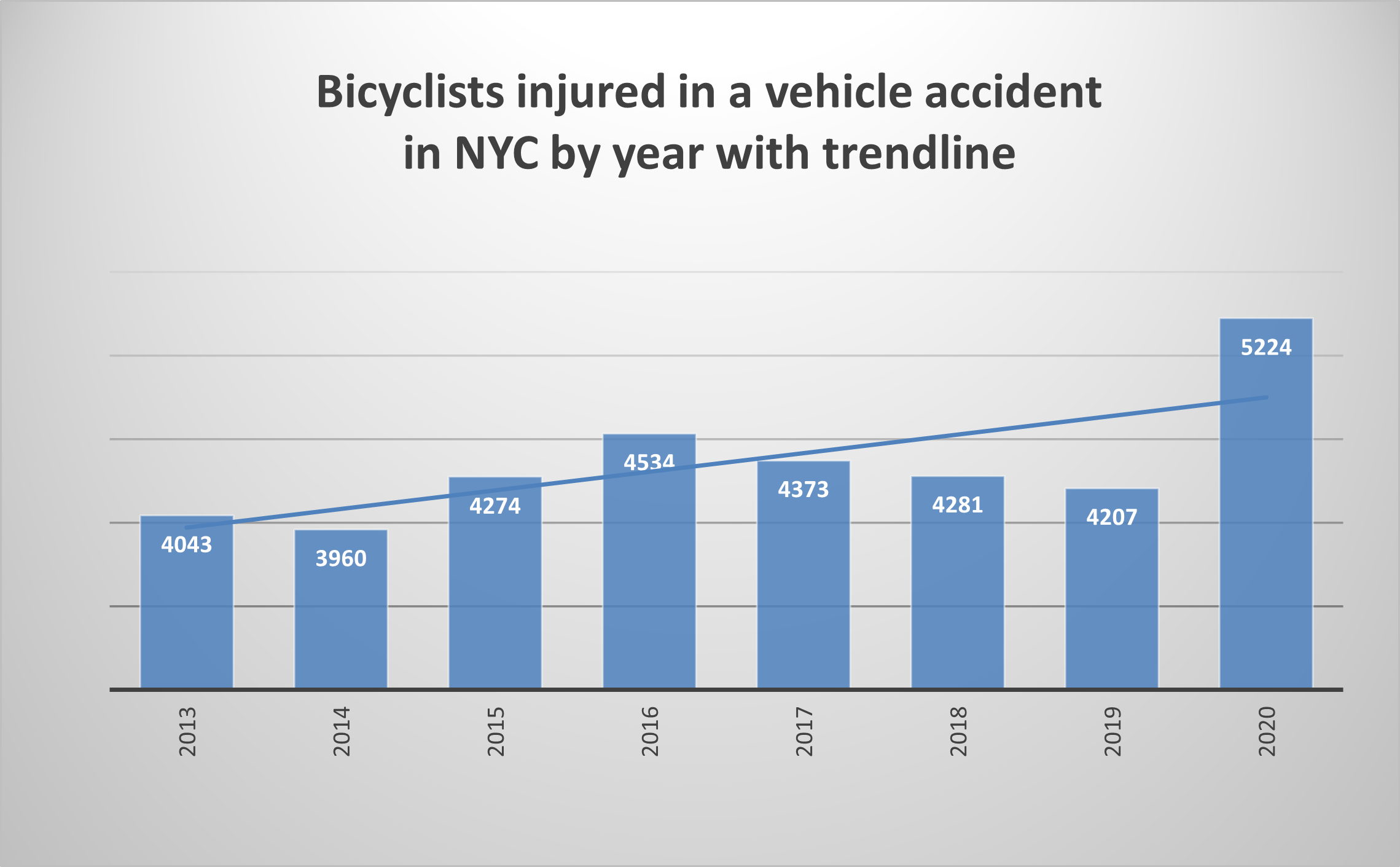 27 cyclists were killed last year compared to 24  in 2019.  After bicyclist deaths reached a record low in 2018 with 8 cyclists fatalities, they then reached a record high in 2019 and another one in 2020.  The rise in both bicycle accident injuries and fatalities shows the need for the city to develop more friendly cyclist infrastructures. 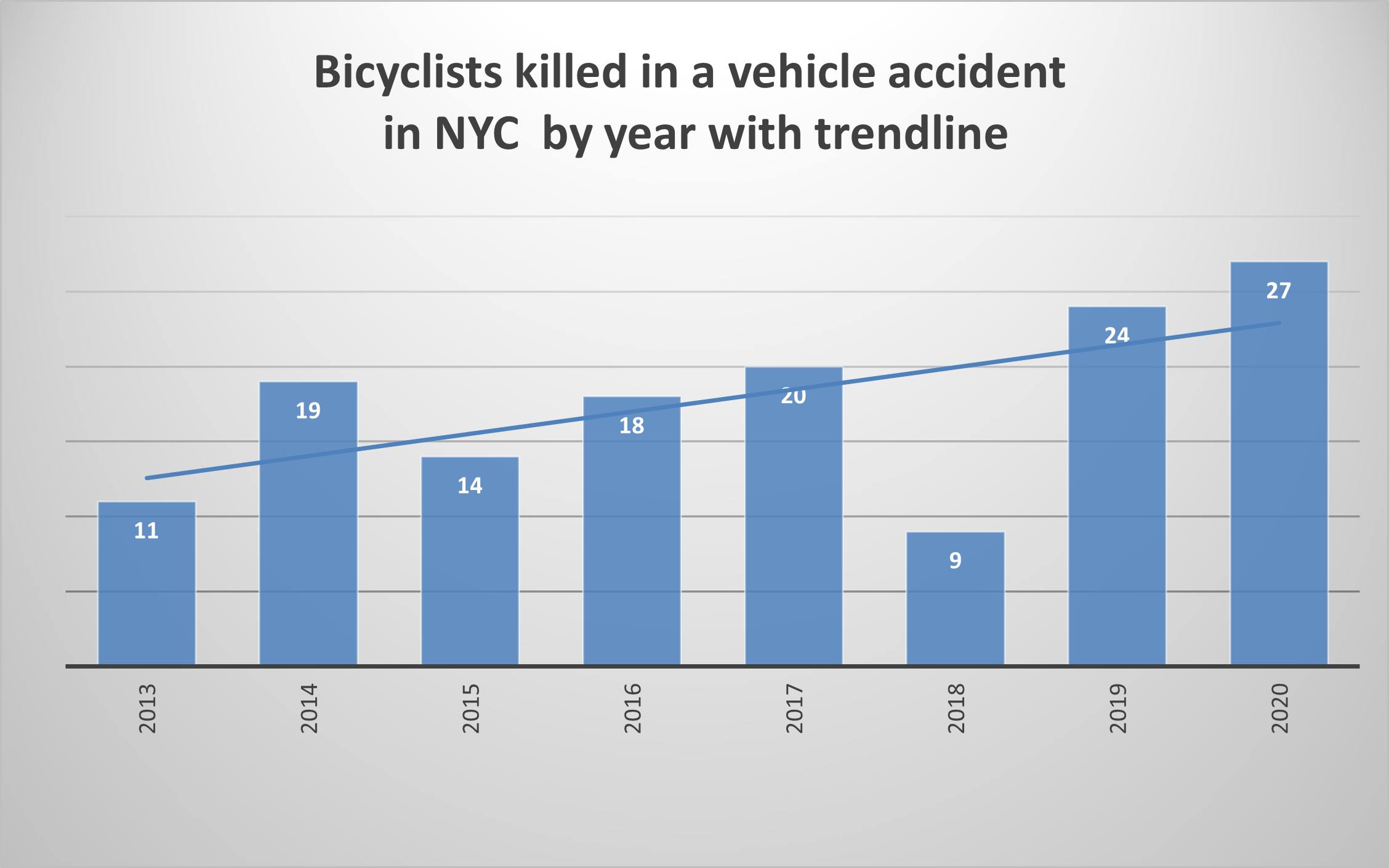 90 motor vehicle drivers were killed in crashes in 2020 compared to 57 the previous year. That is an increase of more than 36%. Even before Vision Zero in 2013, the number of  driver deaths was below this record with 84 fatalities. Because the streets were not as busy as usual and also because the police were reluctant to arrest drivers during the Covid19 crisis, speeding and recklessness significantly increased, causing an unusually high amount of driver fatalities. 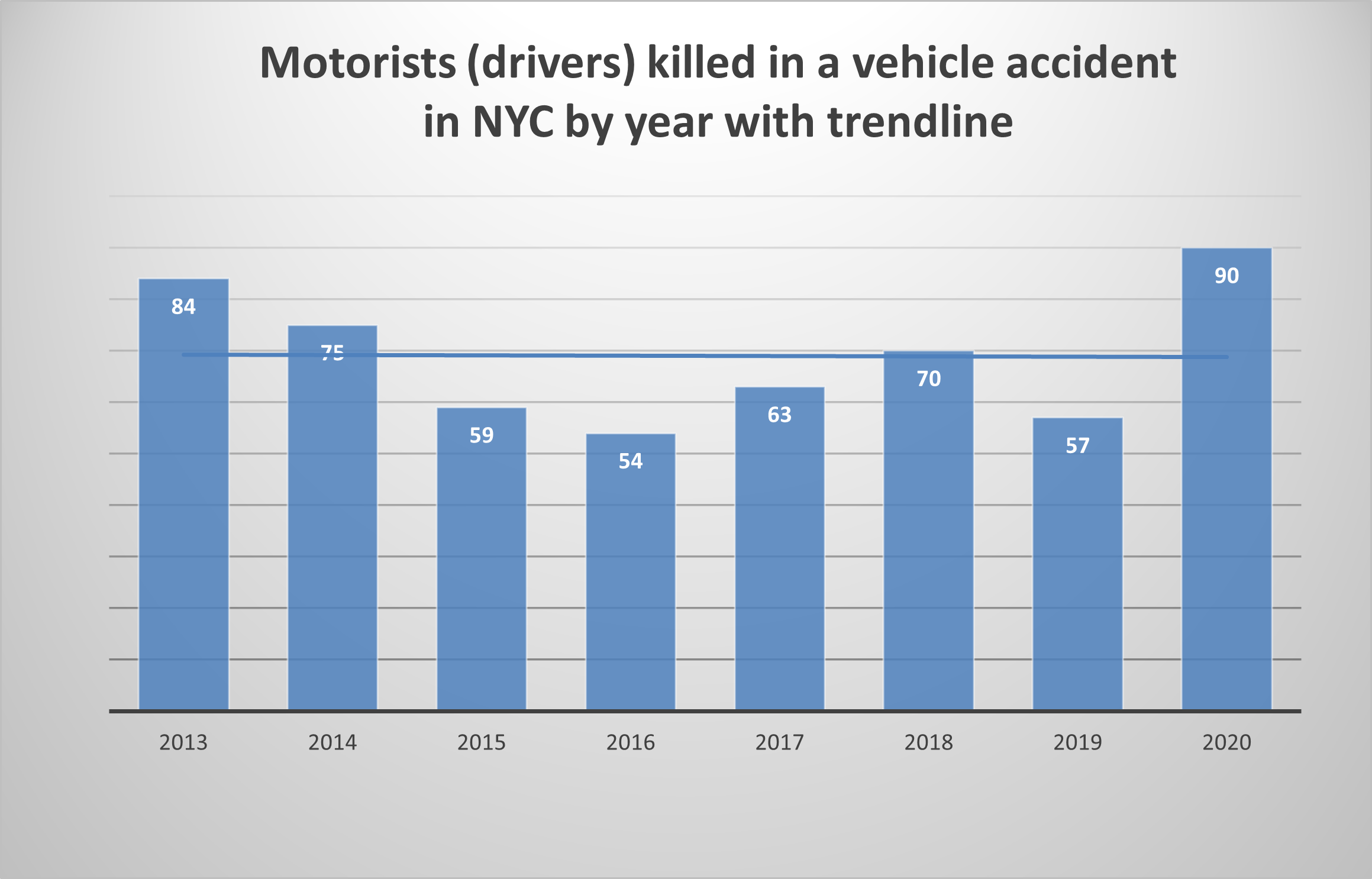 Motorist injuries were lower than usual with 19,534 motor vehicle drivers injured in crashes in the city. The lowest number of injuries is mostly related to the decline in traffic and activities during the Covid-crisis. 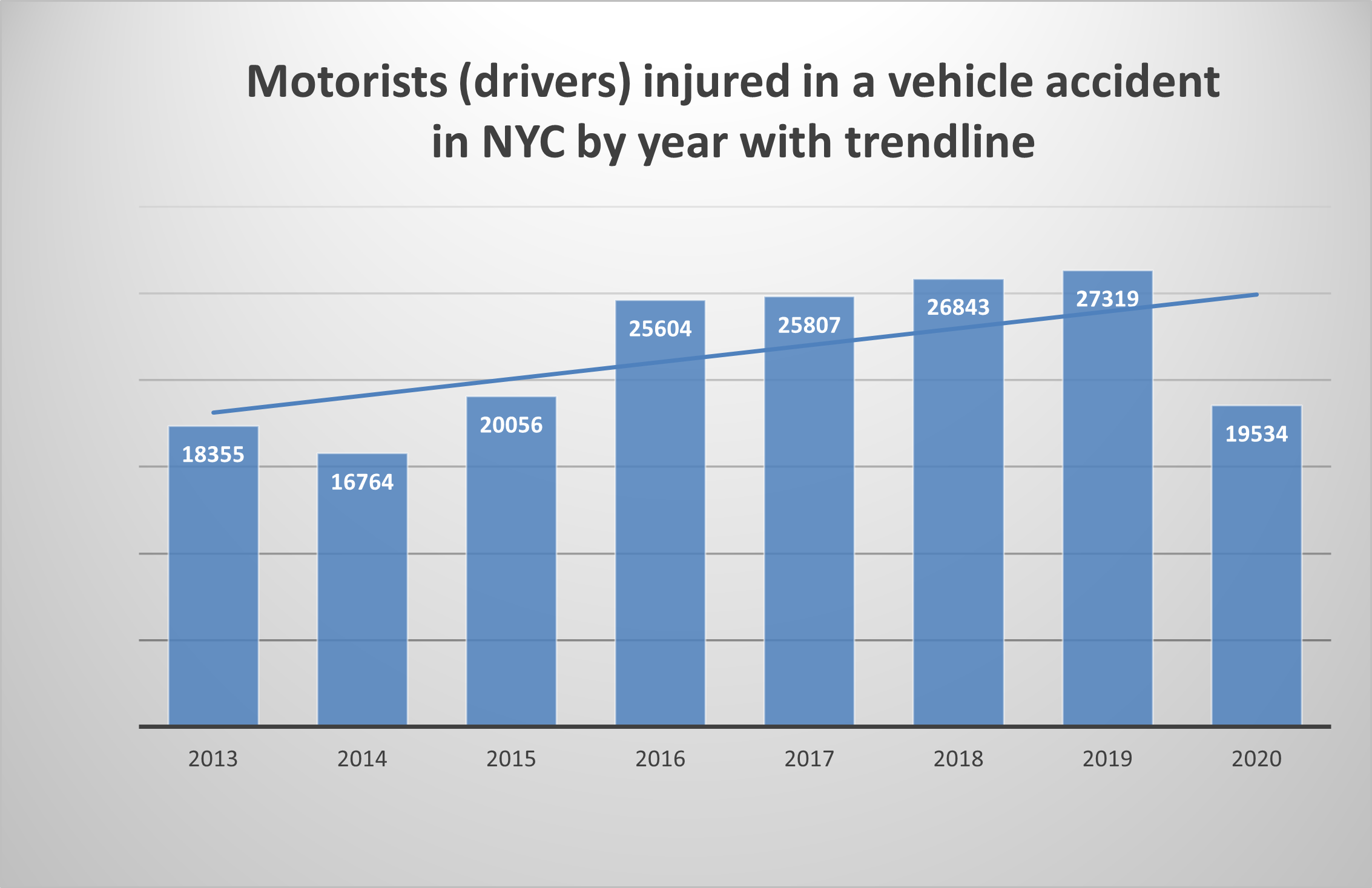 Passengers killed in car accidents also recorded a significant increase in 2020 with 28 fatalities. This is the second highest number of passenger deaths since 2013. The record high over this period was in 2015 with 34 passengers deaths. 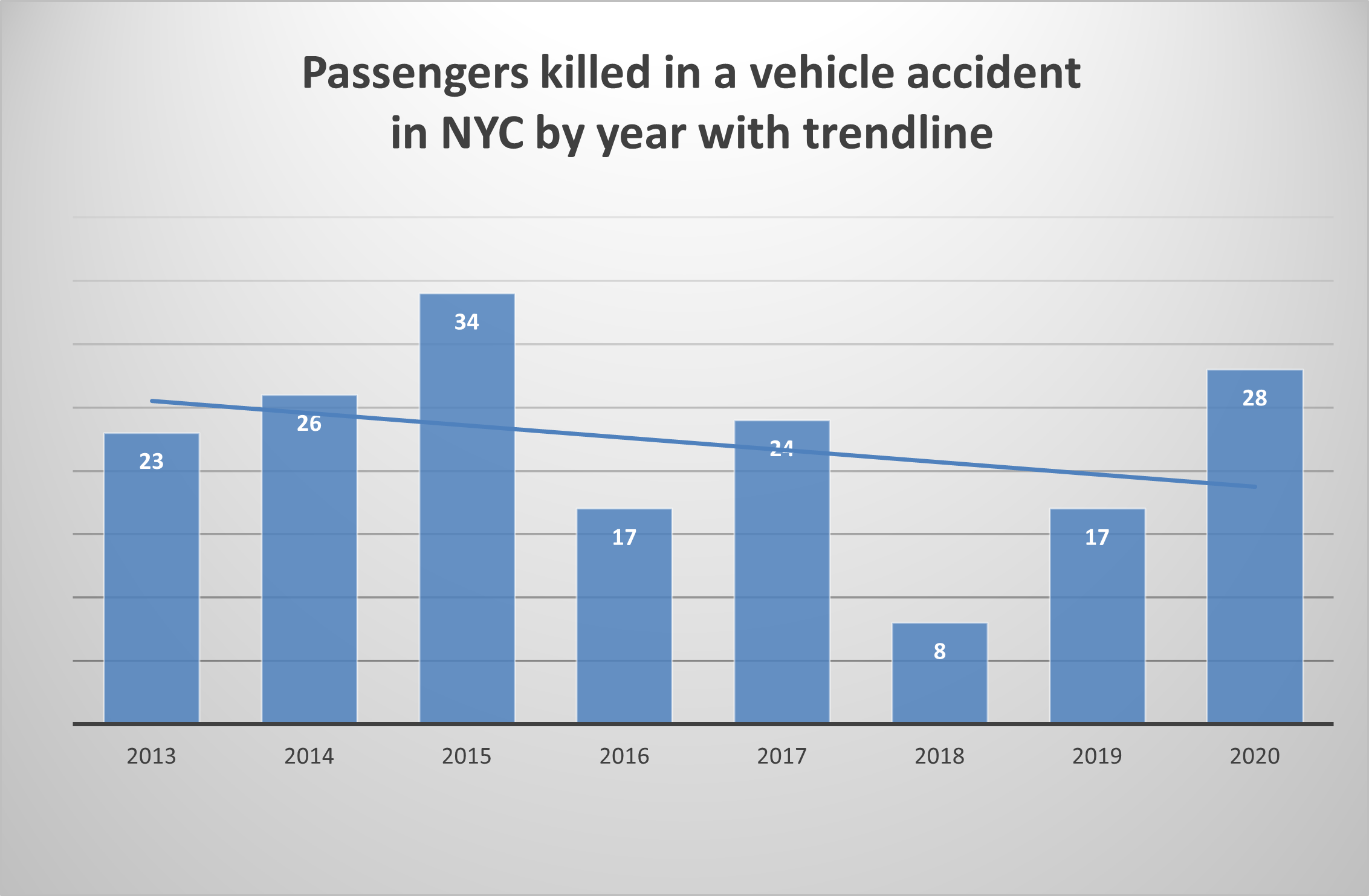 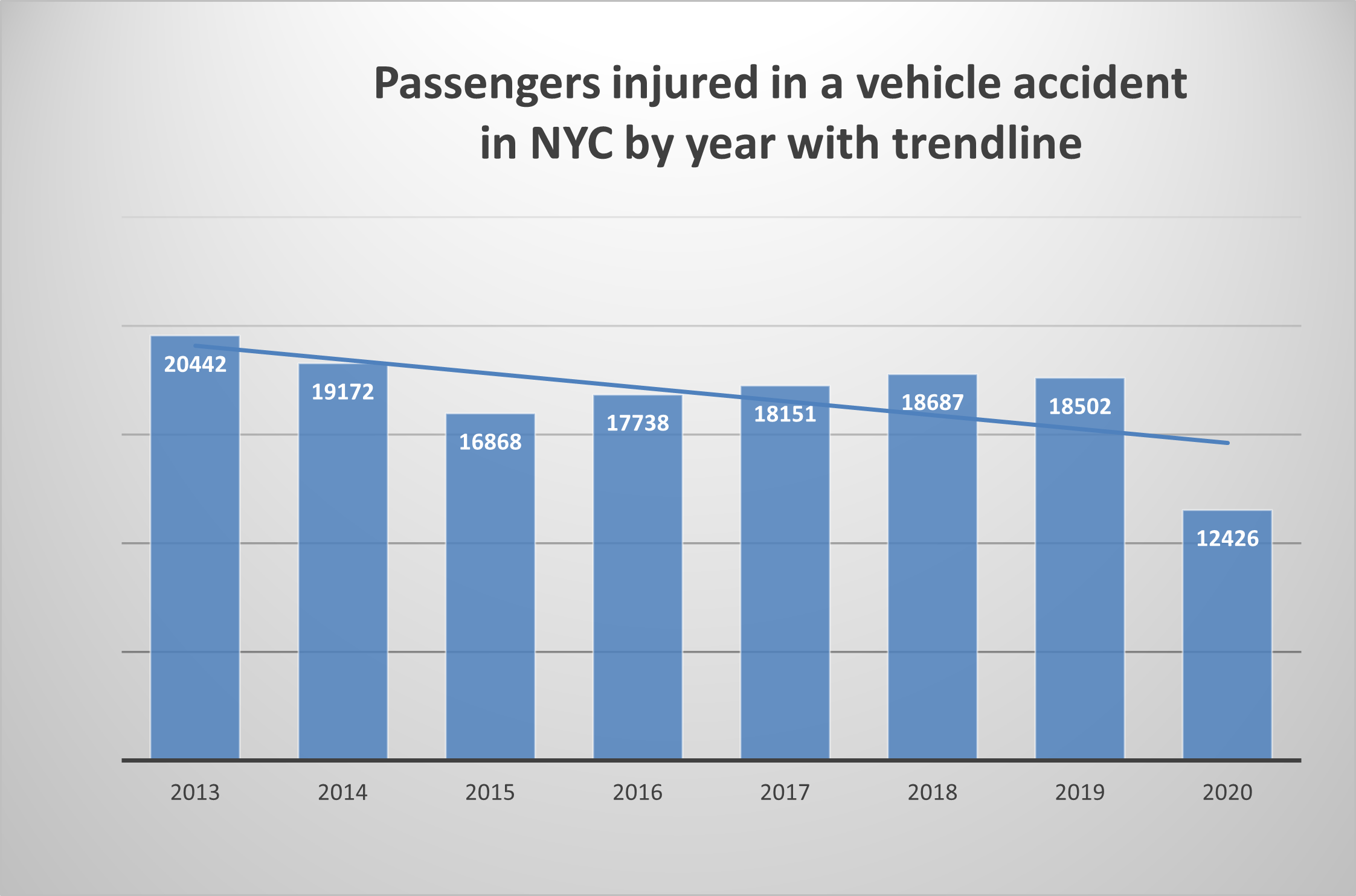 Pedestrians were the only NYC road users whose both  deaths and injuries declined in 2020. With no tourists in town, New Yorkers working remotely from home and the restaurants and entertainment venues closed most of the year, the pedestrian activity was extremely reduced in New York City and as a result less pedestrian accidents occured. Pedestrian deaths reached a record low at 94 compared to 116 a year earlier. 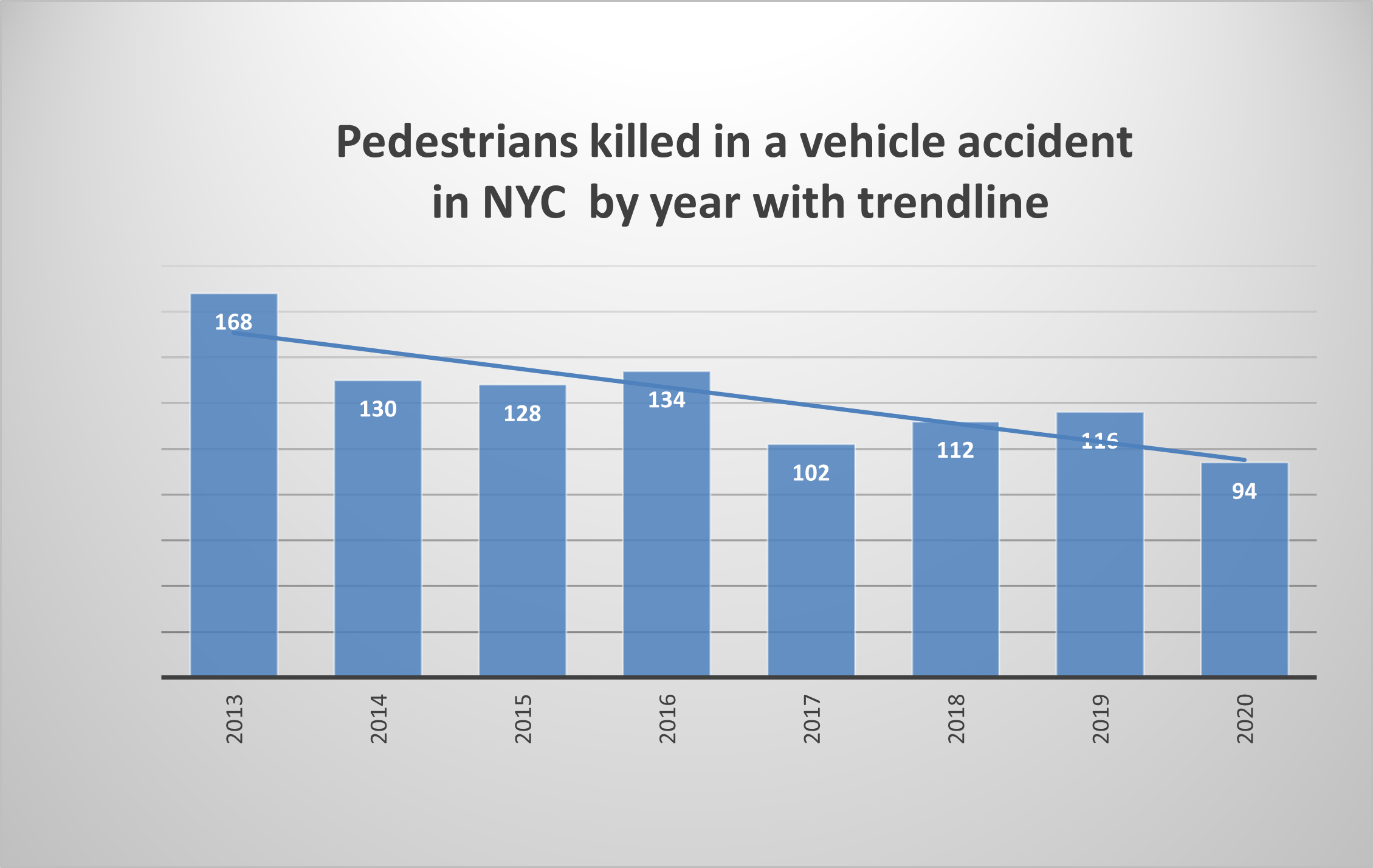 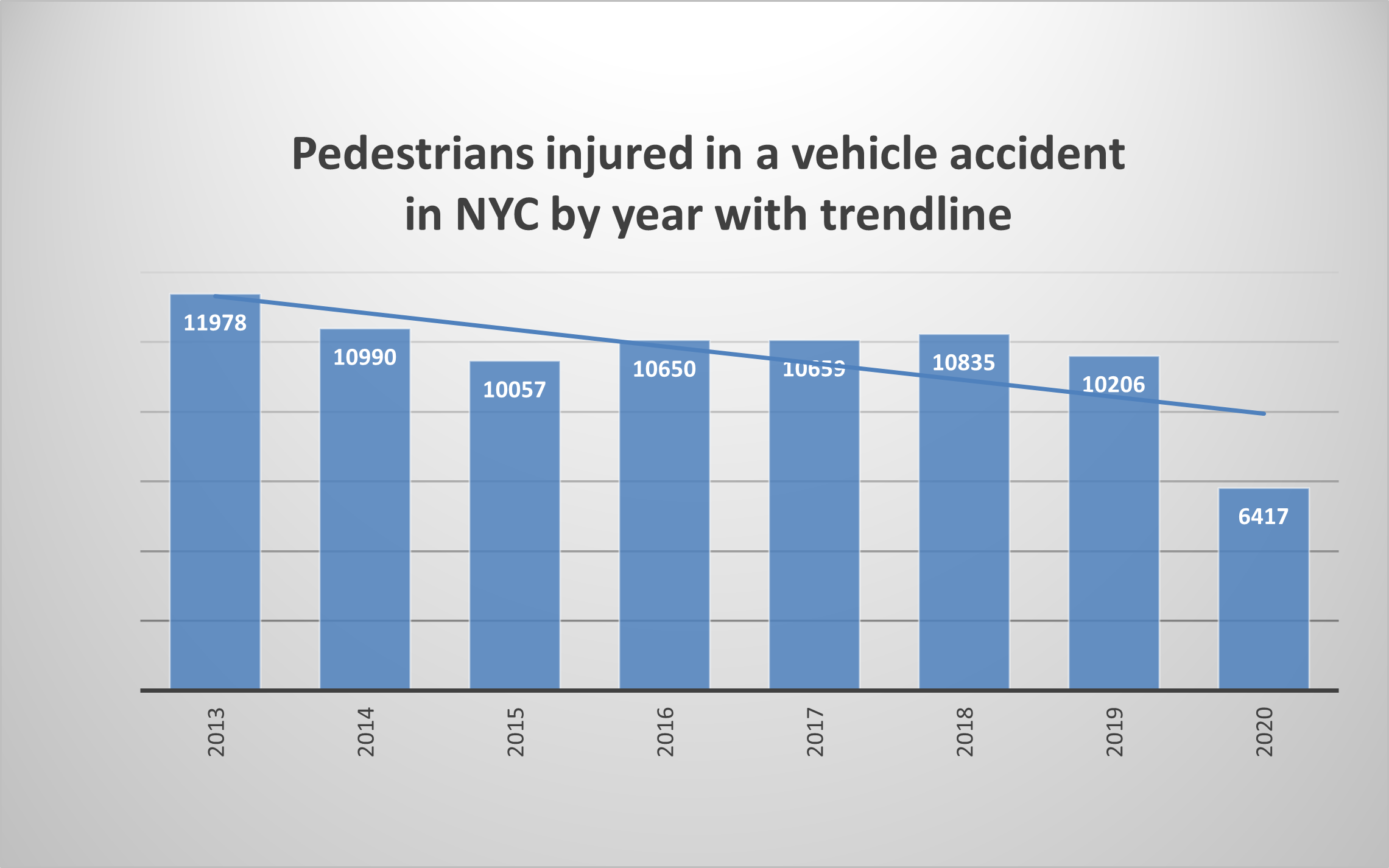 2,159 motorcycle accidents resulting in injuries or deaths were recorded in 2020. It is difficult to compare this number to the previous years’ numbers as the NYPD changed their accident report policy. Since the beginning of 2020, the NYPD does not create reports anymore for minor accidents that result only in property damages. 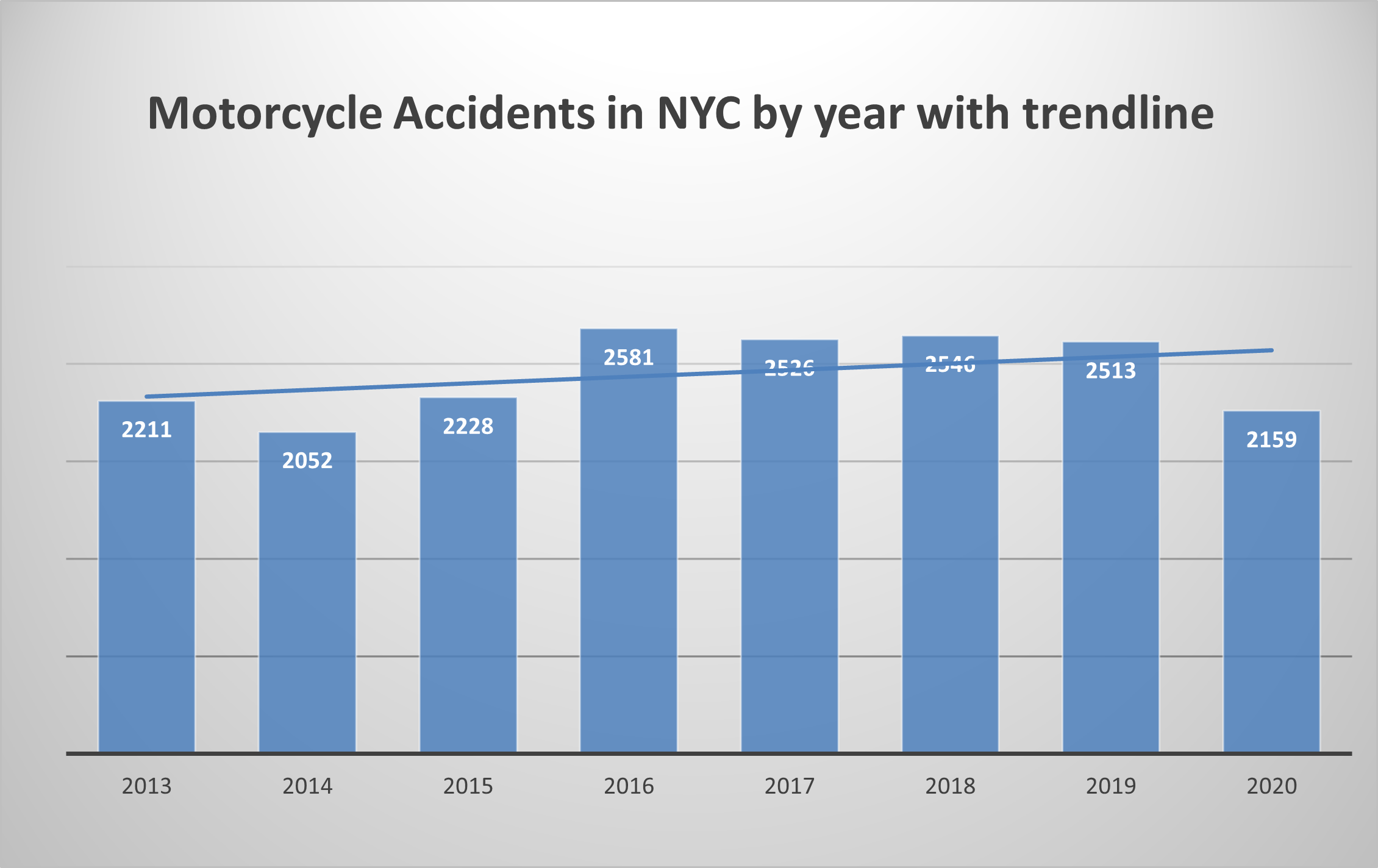 8,118 truck accidents resulting in injuries or deaths were reported by the NYPD in 2020. 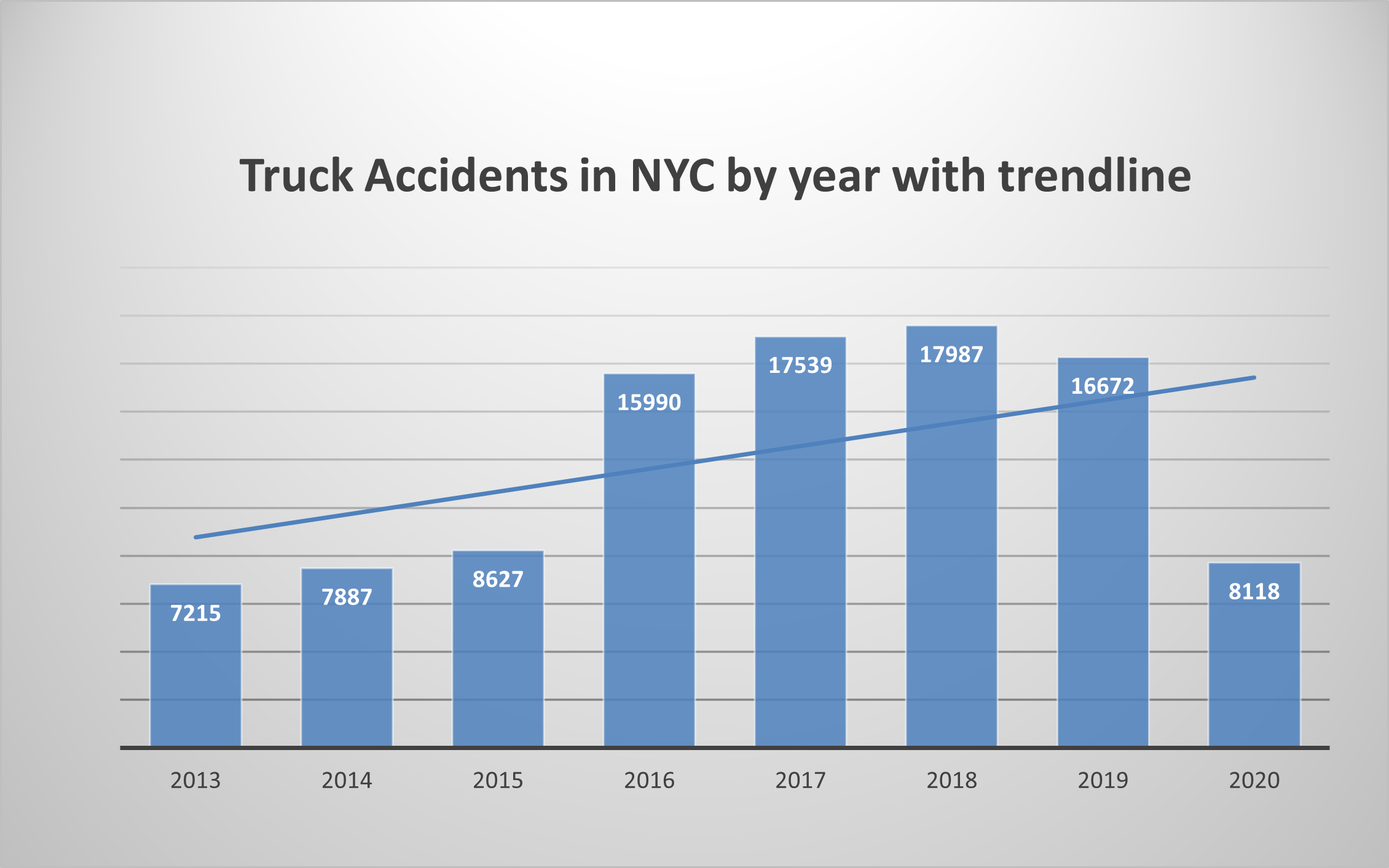 With no tourists in town, schools operating remotely for most of the year and the NYPD only reporting bus accidents resulting in death or injury, the number of bus accidents reported in 2020 in New york was unusually low with 2,788 bus accidents. 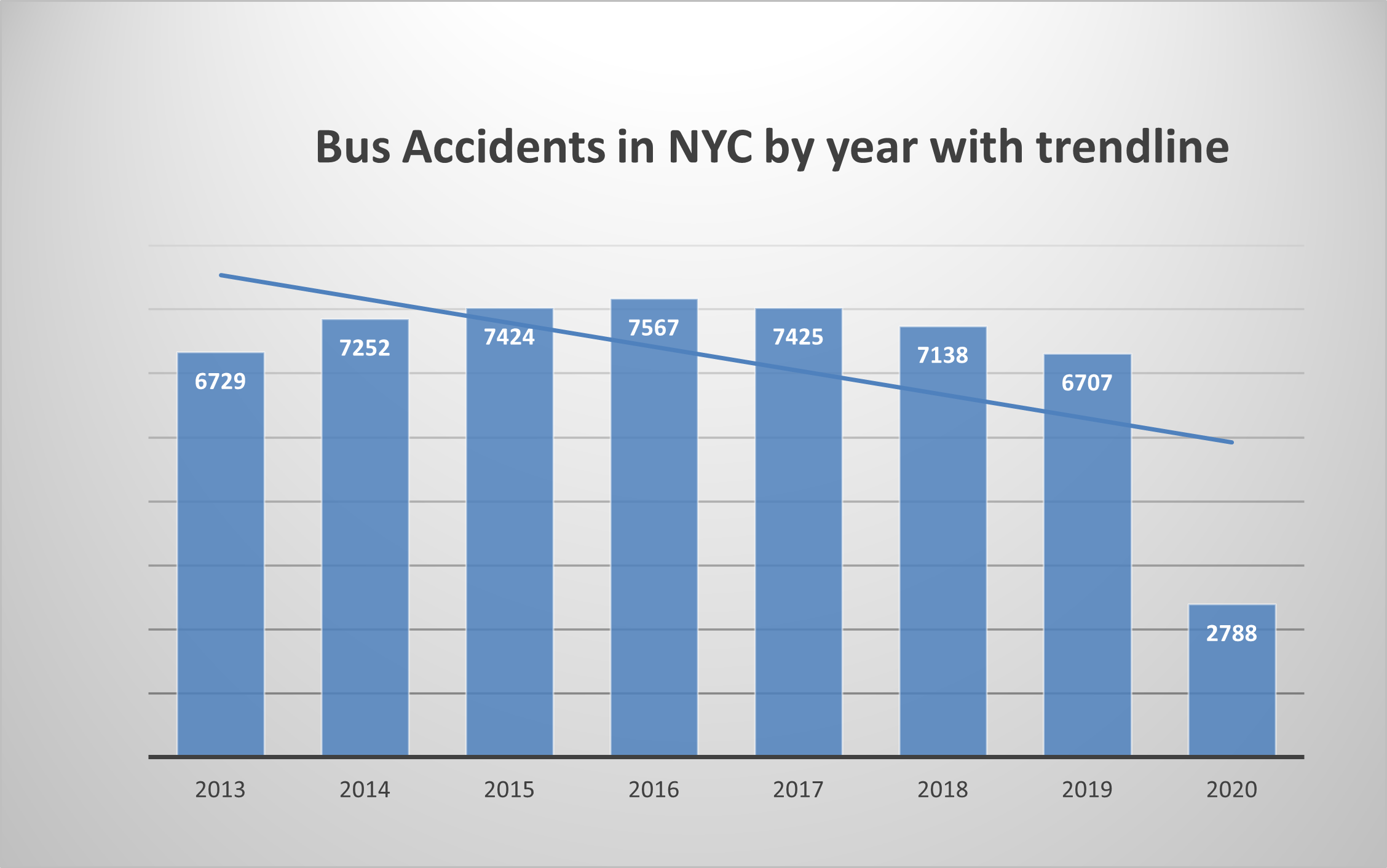 Speed and recklessness killed too many in 2020

Drivers speeding and acting recklessly not only put themselves at risk of deadly accidents but they are also endangering other potential passengers in their vehicle and other road users.