Traffic accident injuries were on a rising trend until the beginning of the Covid19 crisis. Now the decline of activity in the city has lead to a decline in injuries that was significant enough to reverse the trend to a slightly declining one.

After recording their lowest during the lockdown in April 2020, injuries sustained by pedestrians in April 2021 remained lower than the years that preceded the pandemic. Before Vision Zero, monthly pedestrian injuries were usually around 1000. This number gradually declined to around 700 before the covid19 crisis. It was back to 529 in April 2021 after a drop to 139 in April 2020.

Only one bicycle accident fatality since the beginning of the year

For the third consecutive month, no bicycle fatalities were recorded in April. This is only the second time since 2013 that there were not fatal bicycle accidents over a three-month period. The first time was in October, November and December of 2018. Since the beginning of the year, only one cyclist died in January compared to respectively 2, 7, 4, 4, 7, 3, 3 and 1 during the first four months of 2020, 2019, 2018, 2017, 2016, 2015, 2014, and 2013.  The trend of fatal bicycle accidents in New York City is however still on the rise, mostly because of the high number of fatalities recorded in 2020. Last year saw a surge in newbies riding bicycles around the city because they were scared to catch the virus in public transportations. 2020 was the only year during which the monthly number of  bicycle accident fatalities reached a record number of 6 fatalities twice: once in September and once in November.

412 people were injured in bicycle accidents last April in the city. This is the highest number of  bicycle accident injuries ever recorded during the month of April. Cyclists injuries have been on the rise over the last few years as more and more New Yorkers are using bicycles to commute around the city while at the same time safe infrastructures for biking are still lagging in many area of the city. Last year, the summer months saw a boom in bicycle accident injuries. The high number of injuries recorded last April might be an indicator that the same will happen this summer again.

After dropping last year, motorists injuries were back above 1800 in April and continue to be on a rising trend.  Distracted driving is the main cause of this rise in motorist injuries.

Passengers injuries were much lower than usual last April with 1,144 passengers injured in motor vehicle accidents in NYC. Usually the monthly number of passengers injuries oscillate a little below or above 1500. This number indicate that the activity in the city is not fully back to normal. Additionally, because of the Covid19, people might be more reluctant to travel with others in small confined spaces such as cars, vans or buses.

Other categories like bus and truck accidents statistics might be more affected, however it is difficult to know if the decline in accidents is related to the decline of activity because of the Covid19 pandemic or to the new NYPD policy that was enacted at the beginning of the lockdown. Last April 269 bus accidents were reported by the NYPD compared to 47 last April at the peak of the pandemic. 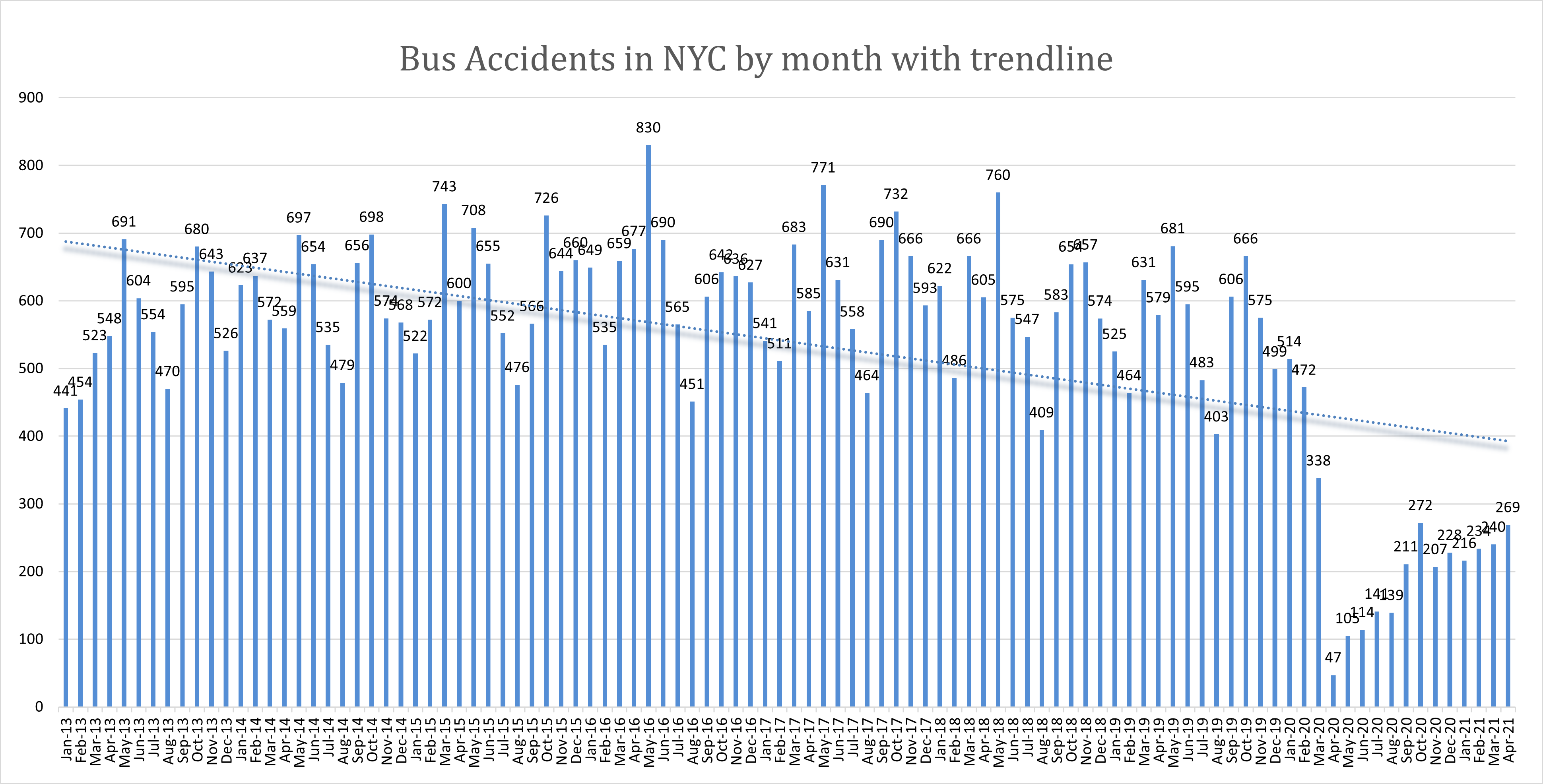 642 truck accidents were recorded in New York City last April compared to 246 one year before. As mentioned above, the decline in activity related to the pandemic and the new NYPD policy make these numbers difficult to compare. 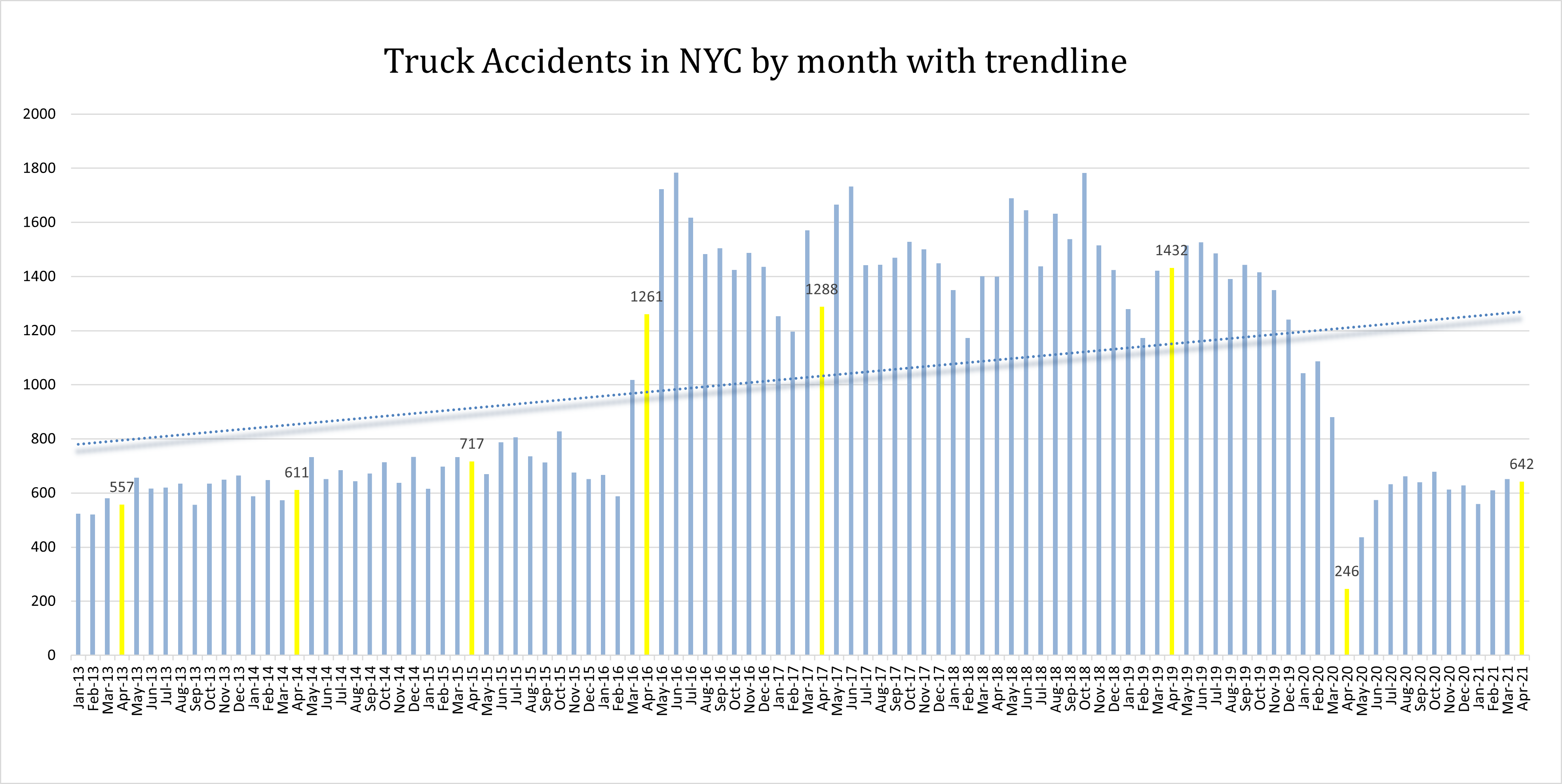