18 people died (8 pedestrians, 8 motorists, 1, cyclist, 1 passenger) and  4,434 were injured in NYC crashes in November 2021 compared to respectively 28 and 4,039 in 2020. The total number of auto fatalities was also lower than in October 2021 during which 28 people died in crashes in the city. While the pandemic changed the way people are commuting in the city, the number of traffic deaths which had exploded in November 2020, is back to a level similar to the last 3 previous years, hovering around 20. Globally, over the last 8 years, the NYC traffic fatalities trendline is declining, however it is the first time since last May that monthly traffic fatalities are actually below this trendline. (Click on graphs for full view)

Pedestrians and motorists represented most of the deaths with 8 of  each category dying in crashes in November. Additionnally one cyclist and one passenger also died in crashes during that month. In November 2020,  the high number of deaths was mostly caused by a much higher number of cyclists (6) and pedestrians (13) deaths, while the number of motorist and passenger deaths were lower and similar to November 2021 (6 and 1). November 21 was also a better month than October 21 during which  8 motorists, 5 passengers, 3 cyclists and 12 pedestrians lost their lives in crashes.

Those injured were mostly motorists (1972) and passengers (1332). Pedestrians and cyclists represented a smaller share of the total NYC auto accident injuries  with 748 pedestrian injuries and 382 cyclist injuries.

Pedestrian deaths were at record low for the month of November. 8 pedestrians died in car accidents in New York City in November 2021 compared to respectively 13, 14, 9, 11, 20, 12 and 25 in November 2020, 2019, 2018, 2017, 2016, 2015, 2014 and 2013. While this number might be lower than usual because of a diminished pedestrian activity in the city compared to pre-pandemic era, it is still positive news especially compared to the previous year when this number was almost 50% higher. November was also the month during which foreign tourists were allowed again in the country and the Omicron crisis had not started yet. Therefore pedestrian activity was a little higher than usual.

Bicycle accident injuries followed the same trend with 382 cyclists injured in New York City in November 2021 compared to 504 in November 2020. This number is still lower than the number of bicycle accident injuries recorded in November 2013, before Vision Zero when 429 cyclists were injured but it is getting closer and closer.  With the pandemic lingering, the new mayor will have to address the increased amount of people commuting in the city by bike and make sure they can do so safely.

Bicycle accident fatalities are also on a rising trend even though only one cyclist died last November compared to 6 in November 2020. So far since the beginning of the year 13 cyclists died compared to 23 for the same period of 2021 and 23 the same period of 2019. While still on a rising trend, cyclist fatalities between January and November 2021 were much lower than the two previous years.

Bus accidents were at their highest since May 2020 last November with 358 bus accidents.  Most of these accidents were accidents involving injuries as since April 2020, the NYPD has a new policy and does not do reports anymore for no injuries or/and small damages accidents. With some increasing touristic activities and the Omicron not yet in the picture in November, more tourist buses were driving around the city during the fall which might have also lead to an increase in bus accidents. 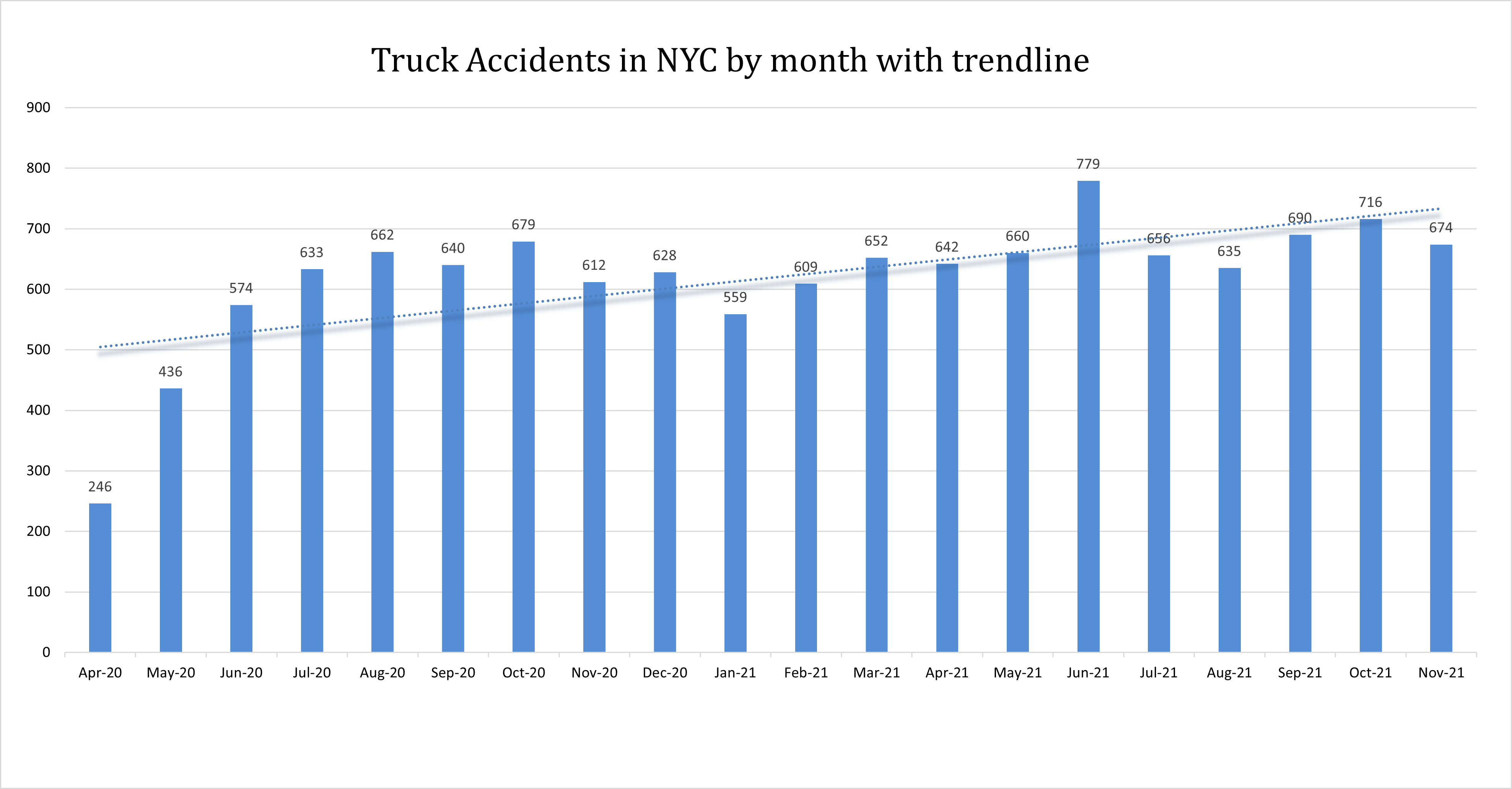