Passengers injuries stayed below 1,500 for the second consecutive year in April. Globally the number of passengers injured has been on a decline since Vision Zero was launched.

Pedestrians are the road users that are the most at risk of dying in traffic accidents in New York City and many of the Vision Zero initiatives have been directly aimed at protecting them. Seniors and children are the most at risk of getting fatally struck by a vehicle. Last April, 7 pedestrians died in an accidents in New York compared to 10 the previous month and respectively 6,7,5,8 and 11 in April 2017, 2016, 2015, 2014 and 2013. Since Vision Zero started the number of pedestrian deaths in April always stayed below 10.

Similarly the number of pedestrian injuries stayed below 900 since Vision Zero was launched at the beginning of 2014. Last April 719 pedestrians were injured in NYC motor vehicle accidents compared to 927 the previous month and 713 in April 2017.  While the graph below shows that the trend of pedestrian injuries is declining it is interesting to notice that the 3-month moving average of the “winter peak” of pedestrian injuries is gradually getting lower but the “summer dip” declined drastically from 2013 to 2014 and then stayed almost stable over the last 4 years.

Sadly despite a lower number of accidents in April the number of bicycle accident deaths was at its highest in April with 3 cyclists fatalities recorded during that month. 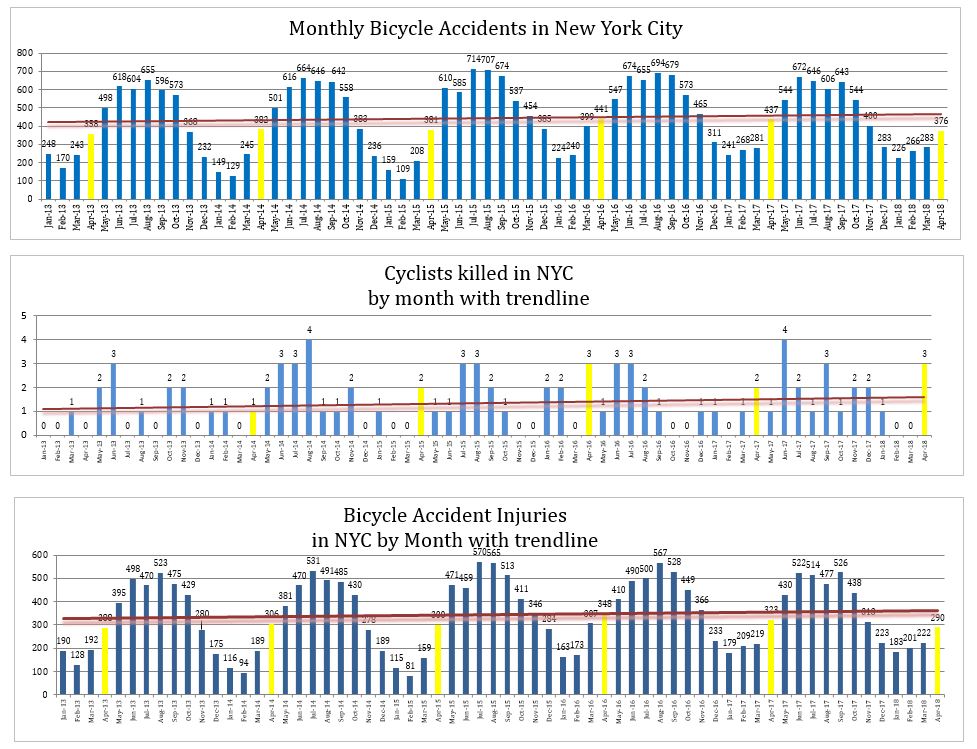