END_OF_DOCUMENT_TOKEN_TO_BE_REPLACED

A FDNY fire truck crashed into an ambulance killing the patient and injuring 11 others. The truck accident occurred on Thursday around 12:50 am. An ambulance transporting 59 year old Jamil Almansouri, a patient with a cardiac emergency was rushing North on Throop Avenue with its lights and sirens on. As the ambulance crossed the intersection of Myrtle Ave, a FDNY truck responding to a call for an apartment fire with all sirens and lights on as well, t-boned the ambulance. The patient flew across the ambulance and died. Almansouri was a Yemeni immigrant who owned a neighborhood bodega in Brooklyn and known by everybody as “Mike”. His sister, Granna Ahmad, who was in the ambulance with him survived, however she suffered multiple personal injuries including a broken back and two broken legs. She also lost all her teeth. The medical technician who was in the back with the deceased victim and his sister also suffered serious injury. The driver of the ambulance was hospitalized and required surgery for a serious leg injury. Six firefighters were also taken to to the hospital as well as two other people who were in a car waiting at a traffic light and whose car was also struck in the crash.

The firemen received a call at 12:43 initially reporting that people were trapped in a building. 6 minutes later the ambulance picked up Alamsouri who was in critical condition and took off for Woodhull Medical Center. Two minutes later, both vehicles crashed into each other, 3 blocks away from the  apartment fire. Thankfully, only one resident was living in the building and he was able to escape on his own.

According to preliminary investigations, the ambulance had the green light while the fire truck had the red light. However both vehicles had the right to bypass the light as they were both responding to a 911 emergency.  Some protruding scaffolding on a building near the intersection might have blocked the view of the fire truck driver.

END_OF_DOCUMENT_TOKEN_TO_BE_REPLACED 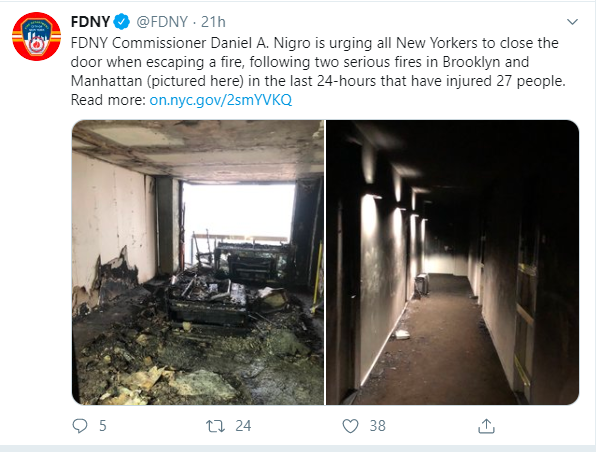 22 people were injured in a fire that erupted in a high-rise in Manhattan.
The fire started around 2 AM on Tuesday on the 24th floor of a 41 story building located on E. 72nd St.

CLOSING THE DOOR COULD HAVE PREVENTED MANY INJURIES

END_OF_DOCUMENT_TOKEN_TO_BE_REPLACED

22 year old Joanna Mei is responsible for the fire that killed two people and injured 10 others in Dyker Heights, Brooklyn, on Thursday. The 22 year old nursing student was charged with two counts of murder and arson. Mei told the police that she was upset with the trash filling the hallway and with the death of a relative several years ago. She explained that she set a garbage can on fire and then felt bad about it and tried to kick the can to stop the fire. Instead the burning rubble spread on the floor and reached some nearby gasoline which erupted into flames. Then the fire quickly started to spread all over the building. There were no smoke detectors in the whole building. Specially trained dogs sniffed gasoline on Mei clothes as well as in other spots of the building including on the third floor where the two victims were living. The victims, 58 year old Xi Huang and 56 year old Feng Xu were a couple from China. They had moved into the building a little less than a year ago. Mei also lived on the third floor.

A FDNY truck crashed into two cars in New York City on Saturday injuring 7 people including a child.  The accident occurred in Queens at the intersection of Booth Memorial Ave and Kissena Blvd. The fire truck was on its way to a fire in Flushing and its sirens were on.  The fire truck hit a Lexus SUV. The Lexus SUV then ricocheted into a Mercedes SUV.  The Mercedes flipped over on its side. A total of 10 people were injured in the firetruck crash. 7 of them were transported to the hospital with serious injuries. Among them a child and an adult were critically injured. 3 other people including a firefighter were treated for minor injuries at the scene of the accident.

14 people suffered personal injury after a fire truck struck a MTA bus in NYC.  The accident occurred Sunday in Astoria, Queens, NYC at the corner of Ditmars Blvd and 21st Street. A little bit after noon the fire truck  was heading down Ditmars Boulevard to respond to a blaze nearby. Sirens and emergency lights were on.  According to the NY Daily News, the truck passed a red light and  collided with the bus that had the green light and was crossing on 21st St.  Witnesses  said the crash sounded like a bomb.  The impact was so strong that the bus careened into two other parked cars and jumped the curb  before finally stopping two steps away from people sitting at an outdoor cafe. 12 bus passengers were injured and transported to the hospital.  Two firefighters were injured as well and also transported to the hospital.

Later on during the day  another fire truck collided with a car two blocks away.  One person suffered minor injury. The fire truck  also had emergency lights on when the accident happened.

Last year there were 382 fire truck accidents in NYC.