10 motorists and 7 pedestrians died in NYC traffic accidents in October. No fatalities were recorded among cyclists and vehicle passengers. Truck accidents reached a record high while bus accidents were unusually low for October. Motorcycle accidents started to decline compared to the summer months as the temperature drops and bikers keep their motorcycle in the garage. 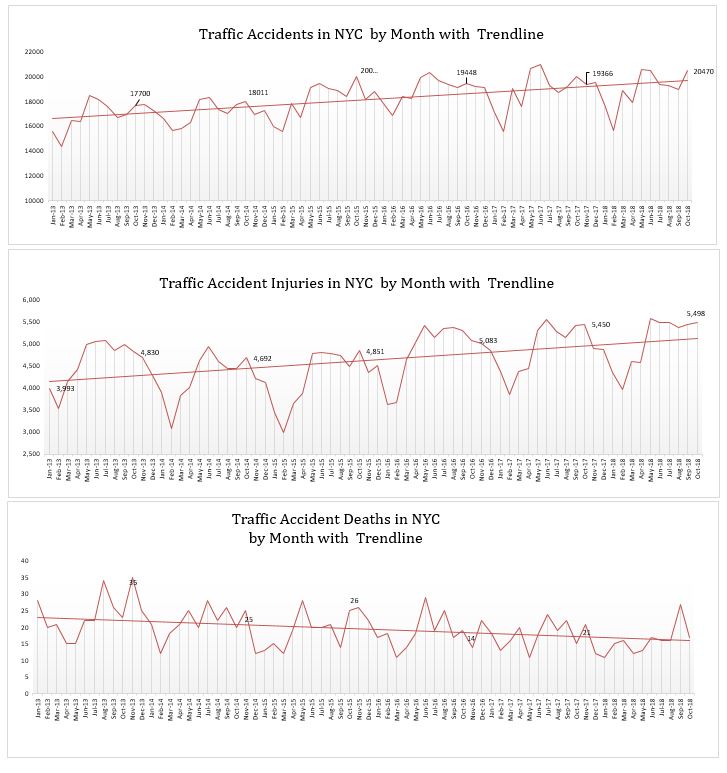 Over the last five years while Vision Zero initiatives focused mostly on making the streets safer for pedestrians and cyclists, distracted driving has led to a significant increase in accidents injuries and fatalities.

Motorists injuries are on a trending rise. Their average monthly number almost doubled compared to 2013 and 2014. Since approximately 2016,  more than 2000 people driving around the city are being injured almost every month. 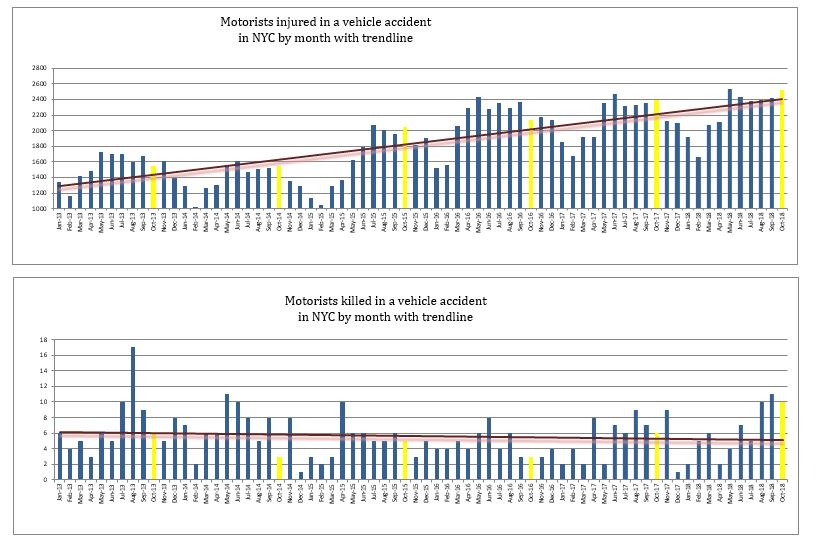 7 pedestrians were killed on the streets of New York last October compared to 15 the previous month and respectively 7, 14, 18, 15 and 15 during the same month of 2017, 2016, 2015, 2014 and 2013.  Pedestrians fatalities are the main focus of Vision Zero. During the winter months as the risk of fatalities increases for pedestrians, the annual dusk and darkness campaign reminds road users to be more cautious. As a result, pedestrian fatalities were at their lowest in October during the last two years. Pedestrian injuries also recorded their lowest number for October since Vision Zero started. 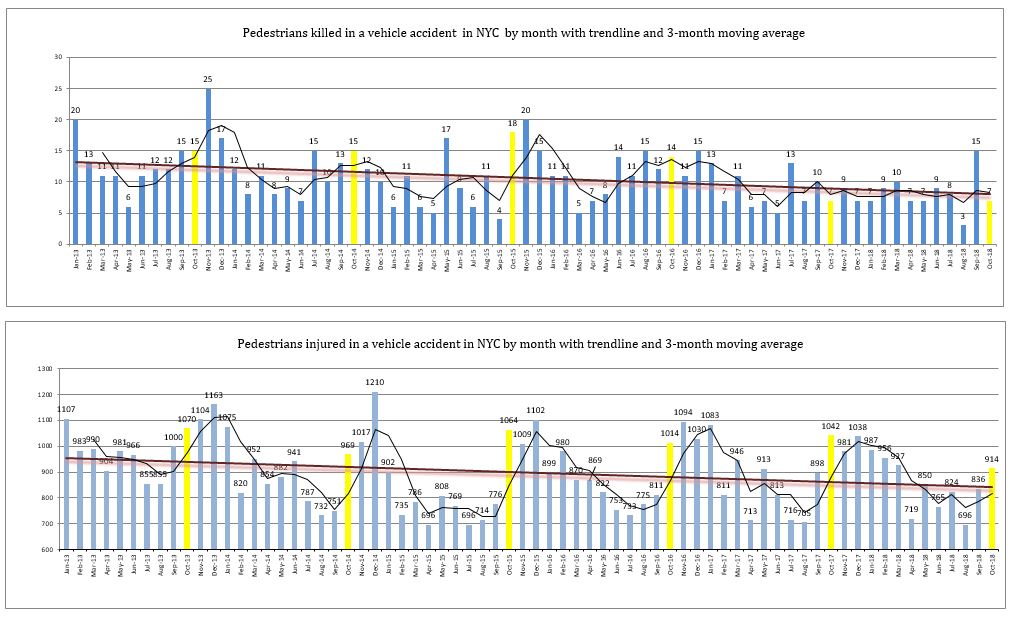 Mayor de Blasio has been pushing New Yorkers to use bikes to commute around the city instead of motor vehicles. With Citi Bike continuing to expand its rental network all over the 5 boroughs and the DOT implementing more and more protected bike lanes, the number of people biking around the city has been increasing exponentially especially during the warm months.

The NYPD recorded 573 bicycle accidents during the month of October, the exact same number that was recorded five years ago in October 2013 while there were much less people using bikes in the city.  While in October 2013, two cyclists died in these accidents, none of them died this year but more were injured. 441 cyclists suffered personal injury in October 2018 compared to 429 in October 2013. 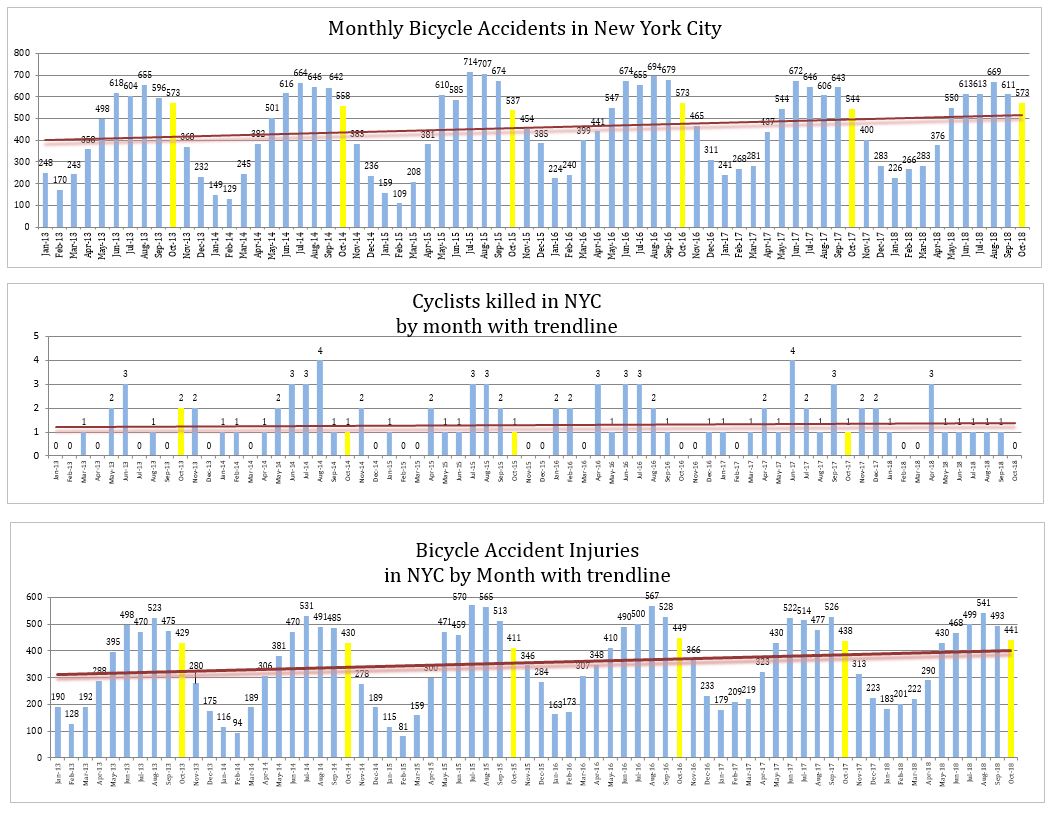 Recently the city has been working on improving safety related to commercial garbage trucks which are considered some of the most dangerous type of trucks in New York City. However statistics clearly indicate than more needs to be done to protect New York road users from dangerous truck accidents.