Brooklyn Law School President Joan G. Wexler has appointed our partner Howard Hershenhorn to the law school’s President’s Advisory Council. This select group of attorneys will help guide the Law School forward by offering the school President and Dean practical advice on the most important issues the school will face in the future.

Peer Review Ratings attest to a lawyer’s legal ability and professional ethics in specific areas of practice, and reflects the confidential opinions of members of the Bar and Judiciary. Mr. Sallay’s legal ability in the field of Personal Injury Law, as rated by his peers, received a “Preeminent” rating which is the highest rating an attorney can receive. In addition, Mr. Sallay was determined to have the highest professional ethics as evidenced by his adherence to professional standards of conduct and ethics, reliability, diligence and other criteria relevant to the discharge of professional responsibilities.

The New York law firm of Gair, Gair, Conason, Rubinowitz, Bloom, Hershenhorn, Steigman & Mackauf is proud to have 10 attorneys who have been awarded with a “Preeminent” AV rating by their peers.

The Nassau Academy of Law is hosting a 6-session hands-on workshop series to learn and develop effective trial skills, from jury selection through summation.
On Monday,  April 4, 2011 our Partner Ben Rubinowitz will co-chair and present a lecture and interactive workshop on cross examination to lawyers who attend this lecture series.  Recognized for obtaining some of the largest verdicts in the State, Ben has always been willing to share his expertise with fellow trial lawyers. “I view it as an honor to be asked to speak at the Nassau Academy of Law and look forward to speaking on this subject.”
Ben’s firm,  Gair, Gair, Conason, Rubinowitz, Bloom, Hershenhorn, Steigman & Mackauf is known for their expertise in representing victims of car accidents, bus and train accidents, construction accidents, products liability, wrongful death  and medical malpractice claims and is the only Plaintiff’s Firm in New York with 10 of its lawyers listed in “Best Lawyers.”
Monday, April 4
DELIVER OPENINGS WORKSHOP DIRECT & CROSS EXAMINATION LECTURE
Marvin Salenger, Esq.,
Salenger Sack
Schwartz & Kimmel, Woodbury
Ben Rubinowitz, Esq.
Gair, Gair, Conason, Rubinowitz, Bloom, Hershenhorn, Steigman & Mackauf, New York

In Jose Miguel Moran v 200 Varick Street Associates, LLC, et al., 80 A.D.3d 581; 914 N.Y.S.2d 307, The Court granted the plaintiff’s motion for summary judgment on his 240(1) cause of action. The plaintiff suffered injury when he fell from a scaffold that lacked proper safety railings. Of particular interest is The Court’s holding regarding intoxication of the injured worker;

On first reading this decision one might conclude that in future cases a defendant might argue that there is no Section 240(1) liability if;

1. A motorized hoist or scaffold is involved.

2. Gravity is not involved if the hoist or scaffold is going up.

3. No 240(1) liability because no elevation related differential.

It is submitted that the basis for the Court’s decision had nothing to do with the scaffold being motorized or the fact that it was going up but the fact that there was no elevation related differential involved. This seems clear since the Court cited Runner v. New York Stock Exchange, supra.
END_OF_DOCUMENT_TOKEN_TO_BE_REPLACED

In a recent article, the New York Law Journal joined with lawyers and law firms in celebrating the 40th Anniversary of the National Institute for Trial Advocacy. NITA, as many lawyers know it, is widely recognized as the premier training center for trial lawyers in the United States.

Our partner, Ben Rubinowitz, has been an active faculty member and Team Leader at NITA for more than 25 years and is a member of its Board of Directors. “I consider it a privilege to be a member of such a fine and distinguished organization,” said Rubinowitz. “NITA has helped to train some of the best trial lawyers in the Country and I am proud to be a part of this organization.” Known for its expertise in the field of personal injury law, the lawyers at Gair Gair Conason Steigman Mackauf Bloom and Rubinowitz have obtained some of the largest awards in the country for victims of motor vehicle accidents, construction accidents, products liability cases, medical malpractice and civil rights cases. 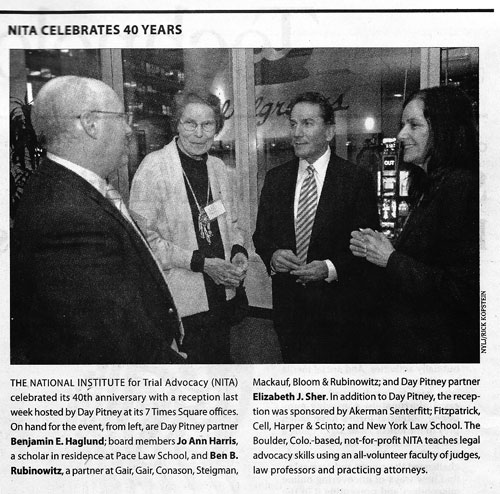 We are pleased to announce that our partner Ben Rubinowitz and his good friend and colleague Evan Torgan were recently featured in the New York Law Journal. For more than 10 years Ben Rubinowitz and Evan Torgan have been providing Expert Commentary in their column, “Trial Advocacy.” Often, Richard Steigman of Gair Gair Conason Steigman Mackauf Bloom and Rubinowitz contributes to these articles.

This month they wrote an influential article “Using the Internet as a Tool for Cross-Examination.” According to Rubinowitz, “It is common for Internet users to post status updates, personal comments, photographs, videos and tweets that quite often reveal their recent activities, whereabouts, activities and even their thoughts.” Rubinowitz explained the dangers of such conduct: “All of this information can be used as a tool for cross examination. It now becomes obligatory for lawyers to carefully check the Internet not only to dig up information on the witnesses they expect to cross examine but to check the Internet for content about their own clients as well.

Known as experts in the field of personal injury law, wrongful death cases, medical malpractice cases and products liability claims, Rubinowitz and Torgan have not only written numerous articles but each has obtained multiple million dollar awards for their clients.

The plaintiff was injured when he fell from a column form in a trench on which he had been standing into the trench. The Court pointed out that while a fall into a trench from the ground on either side is not covered by 240(1) this was not the case in this accident holding as follows;

“Plaintiffs established theirentitlement to judgment as a matter of law by demonstrating that” plaintiff was not furnished with the requisite safety devices andthat the absence of [such] safety devices was a proximate cause of his injuries” (Williams v City of Niagara Falls, 43 AD3d 1426, 1427).Although generally a fall into a trench from the ground on either side is not covered by the statute (see e.g., Bradshaw v National Structures, 249 AD2d 921; Williams v White Haven Mem. Park, 227 AD2d 923), where, as here, a plaintiff is working or walking over a plank or similar support suspended over a trench and falls into it, the statute applies (see Wild v Marrano/Marc Equity Corp., 75 AD3d 1099).”

The Court of Appeals on February 17, 2011, in a 4 to 3 decision has just written an extremely interesting and important opinion (Kabir v. County of Monroe) regarding New York Vehicle & Traffic Law, Section 1104(e).

The Court held that the reckless disregard standard of care in V & T Law 1104(e) only applies when a driver of an authorized emergency vehicle involved in an emergency operation engages in the specific conduct exempted from the rules of the road by V & T Law 1104(b). Any other injury causing conduct of such a driver is now governed by the principles of ordinary negligence.

END_OF_DOCUMENT_TOKEN_TO_BE_REPLACED

In recognition of his success in the Courtroom, Ben Rubinowitz has been asked to lecture to students attending St. John’s Law School on February 28, 2011. Not only will Ben lecture to the students but he will demonstrate successful cross examination techniques in cases in which Ben has obtained multi-million dollar awards for his client’s. The topics include:

1. cases involving Medical Malpractice— the failure of doctors to timely and appropriately diagnose cancer as well as negligence in conducting surgery and surgical errors;

2. Construction Site Accidents — The failure of General Contractors and Owners to provide a safe place to work resulting in injury and death to construction workers;