Recent research has demonstrated that concussions and head injuries in young athletes are even more dangerous than previously thought. Today between 1pm and 2 pm EST, a panel of researchers, athletes, doctors and public advocates will participate in a Twitter Chat on sports-related head injuries in children, tweeting under the handle @safetymd. The chat is hosted by Childress Institute for Pediatric Trauma (@injuredkids) in partnership with Richard Childress Racing. Anybody is welcome to join and share their #HelmetSelfie.

73 year old Ronald Corvin is suing Citi Bike for the traumatic brain injury he suffered after a bicycle accident during which he fell from one of the Citi Bikes he was riding. The Citi Bike lawyer is arguing that the man should have worn an helmet. However Citi Bike stations in New York do not provide the option to rent helmets at their docking station. This option exists in Canada and in Australia where Alta, the Citi Bike operator, has installed helmet rental kiosks for their clients. Read more in the NY Daily News

It will be interesting to follow the evolution of this case as the Citi Bike program doesn’t have any insurance on their bikes. The cyclists using the share program are responsible for the damages incurred while they are using the bike. (read more here)

29 year old Anna Maria Mostrom, a Swedish model, was riding her bicycle on Main St., Roosevelt Island, NYC, when she was struck by a New York City bus making a left turn. The woman fell on the ground and sustained severe brain injuries. She was transported to the hospital where she already has undergone two surgeries. According to the NY Daily News, the young woman is brain dead and her prognosis is bleak.
Picture: Facebook

59 year old Jill Tarlov was struck by a cyclist as she was in a crosswalk in Central Park last Thursday.She suffered severe head trauma and was on life support before she passed away this week-end.

According to witnesses the cyclist was riding his bike recklessly and was most probably above the 25 miles-per-hour speed limit. He swerved to avoid a group of pedestrians and hit the woman.

Transportation Alternative, a bicycling and walking advocay group, released a statement asking the NYPD to “investigate the accident including the cyclist’s speed as he approached Ms. Tarlov”.

END_OF_DOCUMENT_TOKEN_TO_BE_REPLACED

An 87 year old woman who was trying to cross the street was hit by a car near Willets Point Blvd and 163rd St in Flushing, Queens, New York, yesterday night. She suffered severe head injuries and later died in the hospital.

In New York City, senior pedestrians have a higher risk to die in a car accident than adult pedestrians. Recent statistics from the DOT show that seniors represent 12% of the NYC population but account for 36% of NYC pedestrian traffic fatalities. 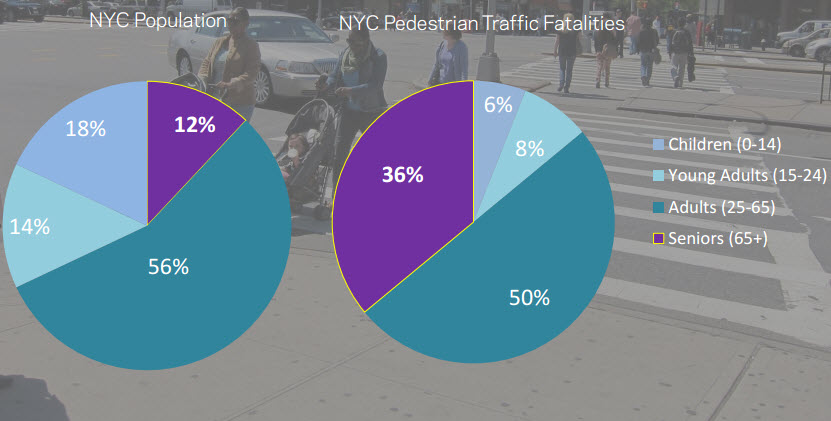 A 13 year old cyclist was seriously injured yesterday after being hit by a taxi on 108th street near Manhattan Ave on the Upper West Side of Manhattan in NYC. The driver stayed at the scene and wasn’t charged. The teenager was brought to the hospital where he is now in critical but stable condition. He suffers severe head trauma as well as lacerations to his legs and arms. Read more in the NY Daily News. 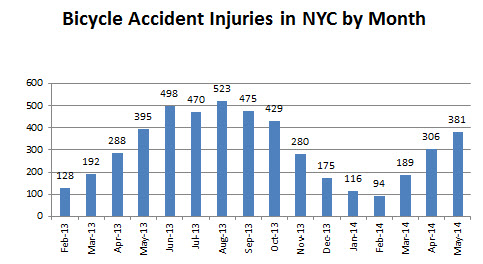 Between 300 and 500 people suffer bicycle accident injury every month during the summer in New York City.

A pedestrian was knocked unconscious by a hit and run driver on a Queens sidewalk yesterday night. A security camera from a nearby restaurant captured the hit and run. Police say a white sedan drove up onto the sidewalk while going westbound on 30th Avenue in Astoria, then plowed into the victim at 45th Street at about 4 a.m. Saturday. The driver sped away. The police are still looking for him.

A 5 year old boy broke his arm and suffered facial injuries and a 6 year old boy suffered traumatic brain injury after the inflatable bounce house in which they were playing was swept by the wind. The “flying” bounce house also knocked down a 10 year old girl who suffered minor injuries. The two young boys fell more than 15 feet as the bounce house continued to rise to 50 feet into the sky. One of the boy fell on a car and the other one fell directly on the asphalt. See video below

Inflatable bouncers are a lot fun for children but they can also lead to serious injuries such as broken bones an concussion. According to the Child Injury Prevention Alliance, every day in the US 30 children are treated in hospital emergency department for injuries related to inflatable bouncers. Bump, bruises and broken Bones are the most common as well as concussions and closed head injuries. 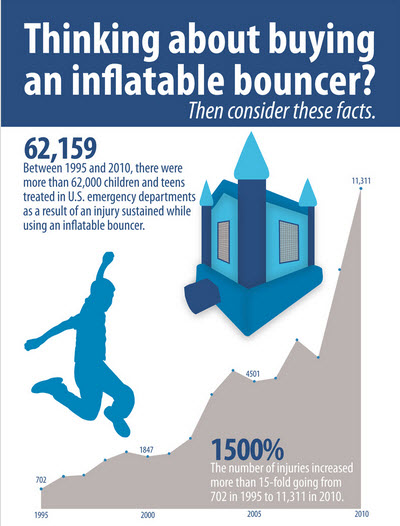 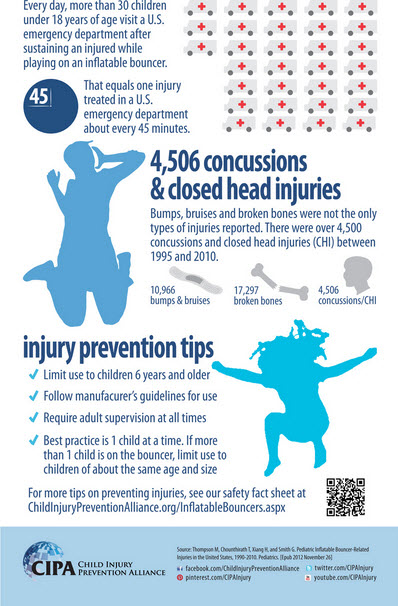 Camilla’s 62 year old brother died as a result of a serious head injury that he sustained in a fall last night in New York. Mark Shand was in New York to attend the Faberge Big Egg Hunt auction at Sotheby’s, a fundraising event for his charity, the Elephant Family. According to the Daily News, after the event, Shand went to an after party at the Diamond Horseshoe Nightclub in the Paramount Hotel near Time Square. As he went out for a cigarette he slipped and hit his head against the pavement in front of the club. He died of his injury at the hospital Today.

Camilla Parker Bowles, the Dutchess of Cornwall and her brother Mark Shand