Seat belts reduce the chance of injury or death during a car accident but 13% of the motorists still don’t get it. According to recent statistics, 52% of all people who died in a car crash in 2012 were not wearing a seat belt. At night time the situation is worst. In 2012, 61% of the motorists who died in a nighttime crash were not wearing their seat belt.

To remind motorists that seat belts can save lives, the NHTSA launched Today its annual “Click it or Ticket Campaign”. Approximately 10,000 law enforcement agencies nationwide will participate in the “Click It or Ticket” mobilization from May 19 through June 1. This year’s campaign includes the “Fake-A-Rooney” advertisement that airs nationally through May 26.

Read the press release from the NHTSA

END_OF_DOCUMENT_TOKEN_TO_BE_REPLACED

A worker who was repairing a car on the sidewalk in Brooklyn, NYC, was struck by a hit and run driver and died from his injuries at the hospital on Saturday afternoon. Felipe Castro Palacios was repairing a car that was parked halfway on the sidewalk in front of the Gowanus Auto Body Shop when the accident happened. The driver of a black Nissan Altima lost the control of his vehicle and crashed into the car that Felipe was repairing as well as two other cars. The driver took off but according to the New York Daily News a witness was able to write down the plate number. The car was a rental and the police are still looking for the driver. 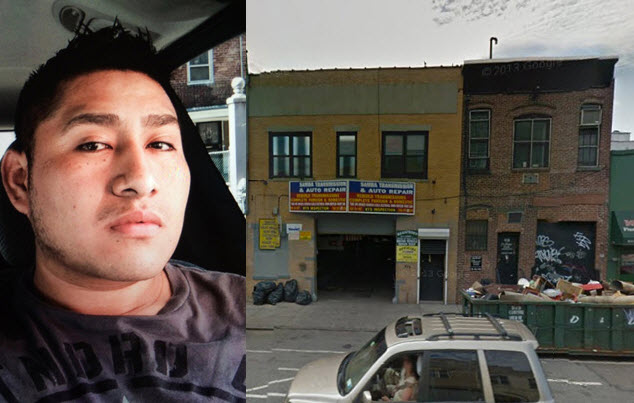 Mayor de Blasio said that 286 traffic deaths in New York City compared to 333 homicides in 2013 compelled him to take action and launch the Vision Zero program. Last week the mayor announced that close to $30 million of his executive budget would be allocated to DOT initiatives to make the streets safer such as the installation of speed bumps in school zones and the development of additional slow zones as well as speed cameras and street redesign. $13 million were also allocated to NYPD traffic enforcement and $ 1.1 for a Taxi and limousine advertising campaign about safety.

New York Construction worker Kyle Brown died because his contractor MTL Design Inc. failed to provide and ensure the use of fall protection safeguards according to OSHA. In its investigation OSHA discovered that Brown was wearing a fall protection harness but it was useless because the contractor didn’t provide workers with a mean to connect to an independent anchorage point to stop a fall.

Brown was installing a metal decking on the top of the roof of an automobile dealership in construction in Pulasky, NY when he was blown off the roof by a wind gust and fell 24 feet to his death.

END_OF_DOCUMENT_TOKEN_TO_BE_REPLACED

A female pedestrian was fatally struck by a school bus with several children on board at the crossing of 93rd street and Second Ave yesterday afternoon. The victim is Jessica Schnieder, a woman in her 40s who was crossing 93rd Street. According to CBS New York, there were a lot of construction going on near the cross street and the bus started to back up because of traffic. The bus struck the woman as she was walking in the crossroad. She died at the scene of severe head trauma. See video for more

An accident between a truck and a dirt bike lead to the death of the motorcycle operator yesterday in East Harlem. 28 year old Shamel Jefferson was riding on an unregistered and uninsured dirt bike in the left lane on third Ave when a truck cut in front of him and struck him causing his death.

Unintentional drowning is the second leading cause of wrongful death among children under 14 and the drowning rate of African American children ages 5 to 14 is 3 times higher than the rate of Caucasian children of the same age. To prevent these type of accidents and also to fight child obesity, Asphalt Green’s Waterproofing, a non profit program, is teaching 427 children from six Bronx schools how to swim and the children love it.

END_OF_DOCUMENT_TOKEN_TO_BE_REPLACED

9 year old Rebecca Ramnarine died and 5 other people suffered personal injury after a reckless driver crashed into the car that Rebecca was riding in with another 11 year old girl and a female driver in Brooklyn, NYC. A third car with 3 occupants was also involved in the crash. According to the media, the driver, 62 year old Kenneth Palache from Long Island, was fleeing the scene of another accident he was allegedly involved in. He ran a red light and crashed into the two other vehicles.

Palache had a suspended license and was arrested for criminally negligent homicide, leaving the scene of an accident and operating a vehicle without a license.

A new report entitled “ It’s No Accident, Examining New York’s Workplace Deaths and the Construction Industry” and published by the New York Committee on Occupational Safety and Health (NYCOSH) looks at deaths related to construction accidents in New York.

Because there are only 71 OSHA Health and Safety Inspectors in New York State, it is impossible for OSHA to adequately enforce construction site safety standards. Adding to that OSHA penalties are so low that they are not an incentive for employers to make the workplace safer. In 66% of the construction sites that OSHA inspected there was at least one violation of a safety standard. This high prevalence of safety violations in the construction industry is an indicator that many injuries and deaths were preventable.

END_OF_DOCUMENT_TOKEN_TO_BE_REPLACED

Vision Zero is asking pedestrians, bicyclists and motorists to pinpoint dangerous traffic areas in New York City on an interactive map that can be accessed online directly with an email address or through a Twitter or a Facebook account. Pedestrian crash corridors are highlighted in red on the map while all pedestrian fatalities that happened from 2009 till now are indicated by a red square. Unfortunately bicycle accident fatalities are missing on the map. New York road users can share, comment, agree on and pinpoint directly on the map the following type of traffic issues:

It is a fantastic tool however there is a risk of distortion. The map was launched a few days ago and we can already see that high poverty areas are typically misrepresented. This can be due to language barriers, less access to technology or maybe less interest in current events. Hopefully Vision Zero workshops in these areas will be helpful in addressing this unbalance. The map shows big areas such as the West Bronx, East Brooklyn and Harlem with with very little activity compared to the rest of the city. Areas of the city where the youngest population live such as Downtown Manhattan and West Brooklyn are the most active areas on the map.