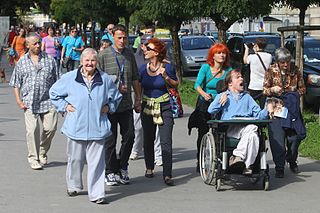 3 pedestrians died and another one was critically injured in New York City last Tuesday. The carnage started at 6:00 am in the morning in Greenpoint, Brooklyn. 71 year old Joseph Ramieri was crossing Meeker Avenue between Bridgewater Street and Gardner Avenue when he was struck by a car. He was transported unresponsive to the hospital. He died there. The driver stayed at the scene of the accident and wasn’t charged by the police.

3 hours later, at 9:00 am, 81 year old Carmen Velez was crossing E. Fordham Road when she was struck by a car making a left turn from Hughes Avenue onto Fordham Avenue, Bronx. She was taken to the hospital with severe trauma to her body. She was declared dead upon her arrival. The driver of the car was charged with failure to yield to a pedestrian and failure to exercise due care.

The third fatal pedestrian accident of the day occurred at night in Gerritsen Beach, Brooklyn. A woman in her 50s was fatally hit by a pick up truck at the intersection of Gerritsen Avenue and Whitney Avenue. No charges were filed against the driver.

END_OF_DOCUMENT_TOKEN_TO_BE_REPLACED

Vision Zero was launched in an attempt to reduce pedestrian and bicyclists deaths in NYC. However, in an unexpected twist, the program primarily helped in curbing motorists deaths.

Back in 2013 before Vision  Zero started, 286 people died and 54,818 suffered personal injury in motor vehicle accidents in New York City. Among the 286 deaths were 168 pedestrians, many of them children and elderly. In New York City, car accidents have been the leading cause of child deaths for many years. According to statistics, two thirds of the children involved in fatal accidents were child pedestrians being struck by cars. Elderly are also at higher risk of being struck by cars in New York City, especially after sunset when the visibility is reduced.

When Bill de Blasio became Mayor on January 1st 2014, he pledged to change this situation and provide safe streets for New York families.  Vision Zero was launched for this purpose in January 2014 and is still ongoing. The program includes various initiatives such as speed limit reduction, dangerous streets re-design and  more forceful prosecution of traffic violations. Since the program started, the total number of traffic deaths gradually declined from 286 in 2013 before the program to 250 in 2014, 235 in 2015 and 223 in 2016. From the beginning of 2014 to the end of 2016, the total number of traffic deaths declined by 22% in New York City.

END_OF_DOCUMENT_TOKEN_TO_BE_REPLACED

The number of pedestrians hit by cars in The NYC 112th Precinct increased by 64% in January 2017 compared to January 2016. Last month 23 people were struck by cars in Forest Hill and Rego Park in Queens compared to 14 during the same period of 2016. Many of the pedestrian accidents occurred during a turn. In order to try to reduce these types of crashes, the NYPD 112th Precinct launched a campaign to tell motorists to be careful while driving through an intersection or trough crosswalks. Last week officers handed flyers to motorists containing Zero Vision information and also specific reminder about speed, not cutting corners and being especially on the look out for pedestrians after sunset. Read more in DNA Info 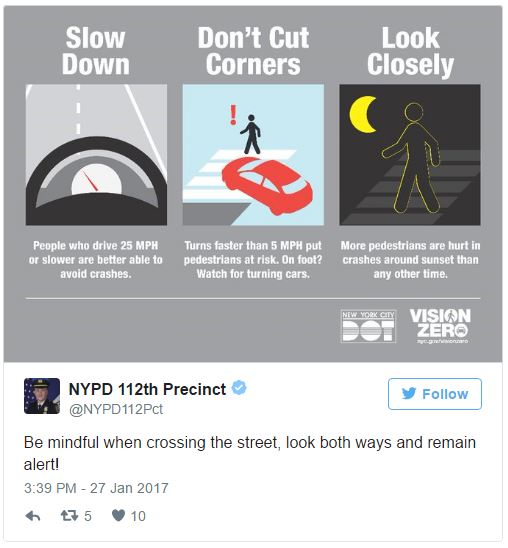 9 people including 7 pedestrians and bicyclists died in NYC car crashes in the first 10 days of 2017. In a recent statement, Paul Steely White, the Transportation Alternatives Executive Director, expressed his outrage and asked the city of New York to accelerate street redesigns. He also wants the New York police to change their attitude and be more accountable.

In his statement, Steely White, noted that 7 of the 9 fatal crashes occurred in locations that have been previously identified by Vision Zero as “priority areas”.  Transportation Alternatives asks the city to allocate immediate funding to redesign these high crashes locations.

Steely White also expressed his outrage towards NYPD investigators behavior. The  NYPD has a horrible habit of blaming the victims and exonerating drivers. For example, the driver of the box truck who fatally struck Rafael Nieves last week and left the scene of the accident was let go without his case being referred to the district attorney (see previous blog). The police also didn’t charge the driver who killed 43 year old Marlon Palacios. The driver told the police his leg had become stiff and got stuck on the accelerator.  The police have the power to act as a judge and a jury while a court should make such decision.  Additionally  the police are supposed to deter dangerous driving in New York City but they often blame the victims and let go reckless drivers.

END_OF_DOCUMENT_TOKEN_TO_BE_REPLACED

The total number of motor vehicle accidents in New York City is continuing to rise as well.

END_OF_DOCUMENT_TOKEN_TO_BE_REPLACED

A 49 year old man was fatally struck by a car yesterday in New York City. The man was trying to cross the Van Wyck Expressway near Jewel Ave in Queens. The man climbed the median and was about to cross the Northbound lane of the Highway when he was hit by a car. The victim died at the scene of the accident. The driver who stopped after the accident wasn’t charged.  The accident occurred during rush hour yesterday afternoon. Both lanes were shutdown creating a major traffic jam up to JFK airport.  (see video on PIX11)

Earlier during the week, on Monday, 7 pedestrians were injured by a reckless car driver who was fleeing the police in Brooklyn. 20 year old Diego Williams was chased by the police after fleeing a traffic stop. During the chase Williams crashed into a police car and 5 other vehicles. 7 pedestrians were also injured. One suffered severe injury and six minor injury. Williams tried to escape by foot but was captured by the police. (read more in the NY Daily News)